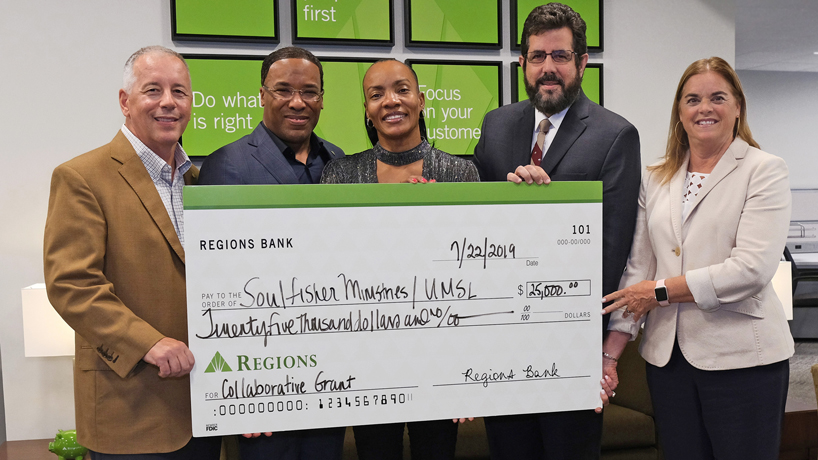 Jim Hart (left), Greater St. Louis market executive for Regions Bank, presented UMSL and The SoulFisher Ministries with a $25,000 grant to help fund a series of panels aimed at reducing the stigma around justice-involved individuals while allaying the concerns local businesses might have about hiring them. From left, Eric Madkins, vice president and community development manager for Regions Bank; Shawntelle Fisher, founder and CEO of The SoulFisher Ministries; Jim Hertel, executive director of human resources at the University of Missouri–St. Louis; and Nancy Barnes-Ault, vice president and community relations specialist for Regions Bank, joined Hart for the check presentation in Clayton, Missouri. (Photo by August Jennewein)

The University of Missouri–St. Louis is partnering with local nonprofit The SoulFisher Ministries to enhance job opportunities for justice-involved people in the St. Louis community.

Regions Bank has awarded them a $25,000 grant to help fund a series of panels aimed at reducing the stigma around justice-involved individuals while allaying the concerns local businesses might have about hiring them.

“Really, what we want to do is dispel the myths and the assumptions that employers have relative to the risk of hiring this population and to show them examples of employers who have done it successfully,” said Jim Hertel, UMSL’s executive director of human resources.

Regions was eager to support those efforts, with Mike Hart, the Greater St. Louis Market Executive for Regions, presenting the award on Monday afternoon.

“Regions is committed to advancing workforce readiness programs and economic development initiatives that help our communities thrive,” Hart said. “This unprecedented collaboration between The SoulFisher Ministries and the University of Missouri–St. Louis offers a unique opportunity for Regions to pledge our financial resources and our volunteer support. We look forward to being part of this project designed to eliminate barriers for people who are working to rebuild their lives and be a part of our city’s progress.”

The SoulFisher Ministries became actively involved in this work last year when it expanded its Adult General Academic Program of Education Reentry program, which provides a continuum of services that aid the transition women make from incarceration back into the community.

Helping individuals secure employment is a key part of helping them reintegrate into their communities.

“That’s the focal point of success,” said Shawntelle Fisher, The SoulFisher Ministries founder and CEO and a UMSL alumna. “If I get out and I don’t have a job and I have five kids that I need to feed, my family who’s been caring for my five kids while I was gone for five years, they don’t care. ‘You’re home. Get your kids.’ But if they can come out knowing that they have a fair shake at getting a job – that secures them somehow. Just having a meaningful expectation that I get up and go to work every day.”

Fisher knows from her own experience as a justice-involved woman who went on to earn bachelor’s degrees in educational studies and media studies from UMSL, an MSW from The Brown School at Washington University in St. Louis and a Master of Divinity from Eden Theological Seminary. She’s been leading her own nonprofit organization since 2014.

“I didn’t do it solo,” Fisher said. “It was because my community supported me that I was actually able to do it. I’m not unique. I’m not like this special golden child. There are more people that are in the same shoes that I’m in that can do what I’ve done and even more.”

That’s the message she wants to take to hiring managers, and they are looking to use the panels to deliver it.

The first one is planned for September. They want to provide business leaders an opportunity to hear from representatives of other organizations who’ve hired justice-involved individuals. They also plan to include researchers who can offer data that might mitigate concern over risk.

“I think we want the employers to get the message that you make risky decisions every day,” Hertel said. “Every hiring decision you make comes with a certain amount of risk with it. This population probably lowers the risk of a bad hire as opposed to others. We know they turn over less. We know they’re used to more structure. They’re going to follow directions.

“There are a lot of things that this population brings that nobody thinks of.”

In addition to panels for employers, they hope to hold a series of open houses that give justice-involved job seekers an opportunity to visit and meet with firms, including UMSL, willing to provide them with opportunities.

Hertel believes these efforts align with UMSL’s mission as an anchor institution to be active partners in initiatives that strengthen its surrounding community and the wider region.

“That anchor mission focuses us on local hiring, and what we need to do is remove some of the barriers that people have to getting jobs,” Hertel said. “This is just one way. It’s broader than this, but we’re starting here. But veterans have issues finding work, previously incarcerated people have issues, disabled people have issues. So we’re just starting the journey at this spot.”