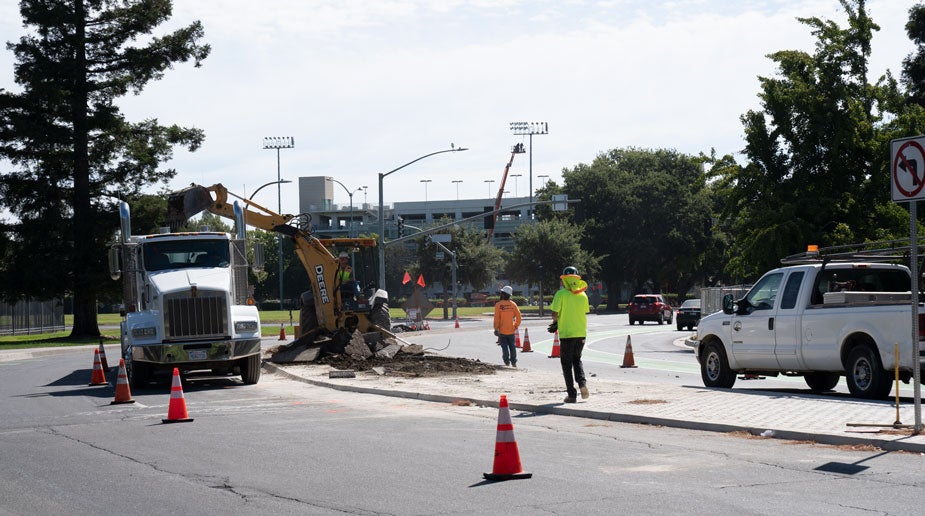 Roadwork is underway on Hutchison Drive west of La Rue Road, one part of the Davis campus’s summer schedule of street, sidewalk and path improvement projects, as well as pavement repair. Drivers should expect lane closures and other traffic controls at all the project sites.

The Hutchison Drive project, scheduled to run through Aug. 2, will lengthen the left-turn lane for vehicles going from eastbound Hutchison to northbound La Rue, and modify the median at Health Sciences Drive to allow for U-turns on Hutchison, say, for drivers coming off Extension Center Drive, who are blocked from turning left onto Hutchison.

Also on tap this summer: reconstruction of the northbound lanes of La Rue Road between Garrod Drive and Hutchison. During the project, July 29-Aug. 30, northbound traffic will be diverted to the southbound side of the road, which will be converted to two-way traffic. The campus rebuilt La Rue’s southbound lanes last year.

Following the completion of paving work on the northbound side of La Rue Road, get ready for a major change: New striping will be put down to reduce each side of the La Rue Road to one lane between Garrod and Hutchison. Parking spaces (approximately 55) and bike lanes will fill the freed-up width, along with a 3-foot buffer in between to protect cyclists from car doors as they swing open. (The La Rue bike lanes will extend between Russell Boulevard and Garrod Drive.)

A separate construction project on Hutchison Drive will bring a partial closure of the road near the center of campus, adjacent to Surge 4 and the Silo, starting Monday, Aug. 5, and continuing through Monday, Oct. 28. Traffic will be restricted to one lane in alternating direction, controlled by flag personnel, for pipeline installation underground. The road will revert to two-way traffic during off-construction hours. Maps show Hutchison Drive construction zones for two time periods: Aug. 5-Sept. 11 and Sept. 12-Oct. 28.

The bike and pedestrian path that runs alongside Old Davis Road (and under Interstate 80) between south campus and the arboretum will be closed from Wednesday (July 24) until Friday, Aug. 2, to allow for underground work on the campus electric distribution system.

Bicyclists are advised to use the bike lanes on Old Davis Road instead during this period, and to allow extra travel time.