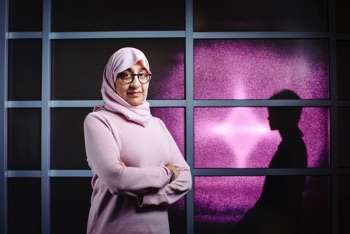 Psychology Professor Nameera Akhtar and her coauthor Vikram Jaswal maintain that many of the behaviors common to autism—including low eye contact, repetitive movements, and the verbatim repetition of words and phrases—are misinterpreted as a lack of interest in social engagement. On the contrary, they say, many people with autism express a deep longing for social connection. (Photo by Elena Zhukova)

A new paper that challenges widely held ideas about autism has attracted comments from more than 30 scholars across the disciplines of psychology, anthropology, education, and neuroscience.

The authors maintain that many of the behaviors common to autism—including low eye contact, repetitive movements, and the verbatim repetition of words and phrases—are misinterpreted as a lack of interest in social engagement. On the contrary, they say, many people with autism express a deep longing for social connection.

Coauthors Nameera Akhtar, professor of psychology at the University of California, Santa Cruz, and Vikram Jaswal, associate professor of psychology at the University of Virginia, put forth the provocative ideas in their paper, “Being vs. Appearing Socially Uninterested: Challenging Assumptions about Social Motivation in Autism.” The article appears in Behavioral and Brain Sciences, which publishes in an innovative format known as “open peer commentary.” The journal specializes in “particularly significant and controversial pieces of work,” which the editors publish with commentaries on each article from specialists within and across disciplines, as well as the authors’ response to the input. Free online access to the paper is available here.

Akhtar and Jaswal welcomed the engagement from scholars, nearly all of whom endorsed their approach, which drew heavily on “testimonies” from people with autism.

“This work began with questions about the widespread assumptions people make about how much—or how little—autistic people want to interact with others,” said Akhtar. “We explored those questions by turning to what people with autism say about themselves.”

According to some autistic people, low eye contact can help them focus their attention, thereby actually enhancing social engagement, said Akhtar. Similarly, repeating phrases—even though the meaning may not be immediately obvious to others—may also be a behavior designed to connect with others. Repetitive movements may simply be comforting, she noted.

“When you ask autistic people about these behaviors, their answers shed new light on the range of desire autistics have for social connection, and they express frustration that their behavior is misinterpreted,” said Akhtar. “The familiar stereotypes about social aversion do autistic people a great injustice.”

The following excerpts are among the published “testimonies” from autistics that Akhtar and Jaswal cited in their paper:

Other scholars were generally enthusiastic about Akhtar and Jaswal’s approach, and there was widespread agreement that autistic testimony is an essential and surprisingly underused resource to understand social motivation in autism. There was some concern about minimizing important differences in autistic cognition and social motivation, which the authors clarified was not their intention. Many commenters called for a more systematic study of autistic perspectives regarding social engagement, which the authors endorsed.

Akhtar and Jaswal particularly appreciated input from a number of autistic scholars who commented on their work. Leaders of the disability rights movement say, “Nothing about us without us,” which Jaswal said makes it particularly gratifying to hear from autistic people at this stage of the research.

“If we want to reduce the social isolation experienced by many autistics, the next step is for both autistic and non-autistic people to learn more about each other’s social goals and social signals,” said Jaswal. “That’s the path to greater understanding and greater inclusion.”