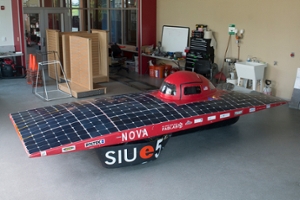 As the American Solar Challenge (ASC) and FSGP are transitioning to featuring a 4-wheel class of
“cruiser” (a multi-occupant vehicle with doors) and a “challenger” (a standard single-occupant vehicle with canopy access), the SIUE team presented its 3-wheeler, which was grandfathered in for the last year for such models. SIUE was the only car in this category.

“Our car was upgraded with a new battery pack with a fresh set of lithium-ion cells in a new configuration,” said SIUE solar car team advisor Andy Lozowski, PhD, professor of electrical and computer engineering in the SOE. “The team received the scrutineer’s award for the battery pack design, and various other teams took pictures of SIUE’s battery for future inspiration.”

“During track racing, the new battery provided more power, and the team discovered that a crack in the motor windings, which was not bothersome last year due to the weaker battery, became troublesome this year,” Lozowski added. “Accelerating uphill on the first turn of Circuits of the Americas demands lots of torque from the motor. This limited the number of possible laps our car could make each day as we experienced multiple protective motor shutdowns. Still, we successfully passed all scrutineering and were happy to keep the wheels on the track every day.”

The SIUE solar car will be retired from racing, and will become a fundraising and training vehicle. SIUE’s team has been working on the new cruiser vehicle to be presented at the 2020 ASC.

“Cruiser is a larger and more expensive project,” Lozowski noted. “But it looks more like a useable car with four seats and trunk space.”

The FSGP is a track event that is held on grand prix or road style closed courses. This unique competition tests the limits of solar cars in handling curves, braking and acceleration. Strategy applied during the three-day event is different than what is applied on the cross-country event.

The ASC is a competition to design, build and drive solar-powered cars in a cross-country time/distance rally event. Teams compete over a 1,500-2,000-mile course between multiple cities across the country. The event has had more than two decades of organized events in North America.