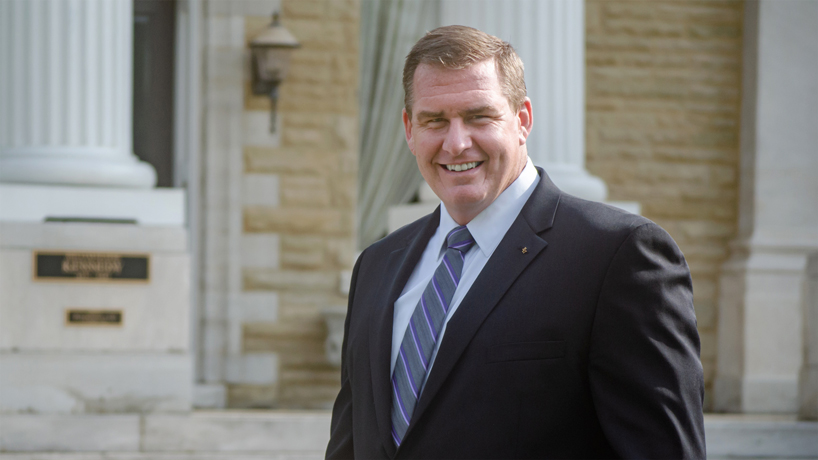 Jonathan Frost, BSEd 2003, is the executive director and CEO of Sigma Pi Fraternity. His influential experience at UMSL and with its Delta-Zeta Chapter helped inspire his career in higher education. (Photo courtesy of Sigma Pi)

During his career, Jonathan Frost has toured 125 universities, worked with more than 20,000 undergraduates and spoken with countless alumni from colleges across North America. But no matter where his work takes him, Frost can’t replicate the warmhearted feeling he gets at the University of Missouri–St. Louis.

“I’ve been to a lot of campuses, and I will put a UMSL education right up there with the best of the best,” he said. “The education I received was really remarkable. At some schools, you can get lost in the shuffle. UMSL is a large school, but it’s also small enough that you can find a community. Everybody that I met really was supporting one another in their education.”

The 2003 alumnus of the UMSL College of Education has dedicated his career to helping others get the most out of their college experiences. That passion has earned him positions in two university development offices and with Sigma Pi Fraternity, where he now serves as executive director and CEO.

Frost was first introduced to fraternity life when he enrolled at UMSL at age 22. He struggled with school at first, looking to find a connection to campus as an older commuter student. Luckily, a friend helped him find a network through UMSL’s Delta-Zeta Chapter of Sigma Pi.

“I actually almost left school. I had around a 3.7 GPA after my first semester, but I went to class, then work and then home,” he said. “A friend of mine who was in the Greek system recommended that I give it a shot. That helped me stay in school because I was able to find a community. It gave me the opportunity to make school more personal.”

He went on to work in the Office of Admissions, serving as a tour guide and helping with New Student Orientation – all of which influenced his career path.

“The university kind of got in his soul,” said Curt Coonrod, the now-vice provost for student affairs and dean of students. “He really blossomed as a student and was a joy to be around. Jon was really good for the university, and the university was good for him.”

After graduation, Frost followed his fraternity connections to the Sigma Pi Executive Office. He remained there about nine years before stepping away for a bit to work for Fisk and Vanderbilt universities – both based in Nashville, Tennessee.

In 2017, he was called back to Sigma Pi, where he now oversees the day-to-day operations of the fraternity and its educational foundation.

“We have a very strong, tight-knit community,” Frost said of the fraternity, which has more than 115 chapters in the U.S. and Canada. “We’re not the largest, and we’re not the smallest. We are in a very good space right now.”

Two years into the role and as he’s revising the strategic plan of Sigma Pi, Frost maintains his main motivation – to help provide a strong community for students that extends well beyond their years on campus.

“I’m a huge proponent for the Greek system, and I enjoy helping set the strategy for the future of Sigma Pi,” Frost said. “Seeing and working with college kids keeps me young. It reminds me of myself as this bright-eyed undergraduate with his whole future ahead of him.”