Michael King, J. Lawrence Wilson Professor of Engineering and chair of the biomedical engineering department, and his team attached two proteins to the surface of lipid nanoparticles: TNF-related apoptosis-inducing ligand – or TRAIL – and the adhesion receptor E-selectin. The injected nanoparticles then adhere to white blood cells, and the introduction of these TRAIL-coated leukocytes into the bloodstream before, during and after tumor removal kills all cancer cells loosed as a result.

“Collisions between the TRAIL-coated leukocytes and cancer cells in the bloodstream are happening constantly,” King said. “We’ve tested this both in the bloodstream and in hundreds of blood samples from cancer patients being treated in clinics across the country. In all cases, within two hours, the viable cancer cells are cleared out. This has worked with breast, prostate, ovarian, colorectal and lung cancer cells.”

Not only can the method work during surgeries, King said, but potentially with patients who already suffer metastatic cancer in multiple sites and who have no worthwhile treatment options. Because all the components of the TRAIL-coated leukocytes occur naturally in the body, it increases the potential for a quicker path from the bloodstreams of mouse models to human trials. 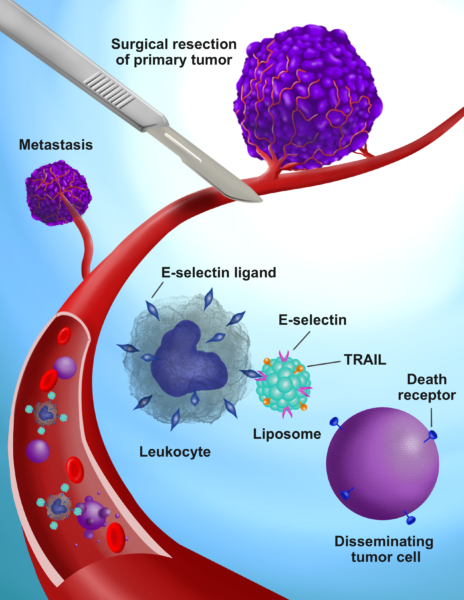 Surgical intervention in breast cancer is a known cause of metastatic growth and accelerated tumor relapse, either because of cancer cells shed during the process, inflammation at the wound site or a combination of the two factors. Chemotherapy is the most widely used treatment for the resulting metastasis, but still, the five-year survival rate for triple negative breast cancer sits well below 30 percent.

The group’s past experiments with TRAIL-coated leukocytes were effective in blocking metastasis, but required multiple repeated injections to sustain their beneficial effect. King said this new breakthrough overcomes those issues by designing three simple doses to coincide with the surgical procedure.

Postdoctoral scholar Nidhi Jyotsana is first author on a paper describing the work that appears today in the journal Science Advances.