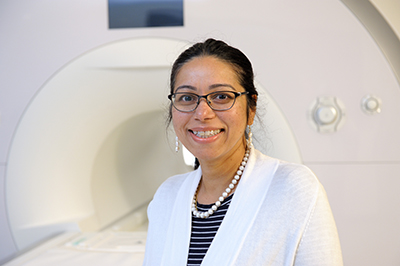 Fatima Husain’s group is interested in understanding the effects of mindfulness-based cognitive therapy on tinnitus.

Living with tinnitus means hearing a constant sound, even in a quiet room. Unfortunately, 12% to 30% of the population suffers from this condition. Most people get used to it, but tinnitus can also cause anxiety and depression.

“Tinnitus is thought to be both a symptom and a disorder,” said Fatima Husain, an associate professor of speech and hearing science and a part-time faculty member at the Beckman Institute. “For example, when you have a tumor that presses on your auditory nerve, it can cause tinnitus. However, if you’ve had tinnitus for three decades, it’s no longer a symptom but a disorder.”

Generally, two approaches are taken to cure tinnitus: addressing the underlying disorder or using methods that help in managing tinnitus’ effects. Mindfulness-based cognitive therapy (MBCT) falls into the second category. MBCT involves meditation and accepting unpleasant thoughts, feelings, and sensations. This technique allows the participants to develop a new relationship with the distress caused by the disorder.

Husain’s group members used MRI to scan the changes in the brain structure and function, something not done in previous studies by other researchers. The Illinois researchers also added in a follow-up period to confirm whether the behavioral changes associated with MBCT would persist. Previous studies looked at behavior both before and after introducing MBCT, with no such follow-up period.

The study, “Assessing Mindfulness-based Cognitive Therapy Intervention for Tinnitus Using Behavioural Measures and Structural MRI: a Pilot Study,” was published in the International Journal of Audiology in June.

“We saw that without the intervention there is no change in behavior during the baseline period,” Husain said. “However, with intervention, a change happened and is maintained even during the follow-up period.”

Interestingly, the behavioral changes correlated with anatomical changes in brain regions associated with vision, attention, and cognitive processing, said Husain, who also is a faculty member in the Neuroscience Program.

The Husain group’s second paper, which will be published soon, looked at different networks of the brain during “rest,” including the default mode network. This network is the state of the brain when it is not performing a task.

Furthermore, the lab believes that the problems associated with tinnitus are not localized to a specific region of the brain but are manifested in neural networks that span multiple regions, affecting attention, rest, hearing, and emotional processing.

The group is currently working in collaboration with Lackland Air Force base in San Antonio on a separate tinnitus study and hope to repeat the MBCT study with a larger number of participants.

“Tinnitus is the No. 1 cause of disability among veterans,” Husain said. “Our work was supported by a seed grant that aimed at facilitating research into the issues and concerns of veterans.”

University of Illinois units providing grant funding include the Chez Center for Wounded Veterans in Higher Education, the College of Applied Health Sciences, and the Beckman Institute.

Researchers also are working to test the efficacy of apps that incorporate mindfulness-based exercises on tinnitus patients.

“A lot of the therapies associated with tinnitus tend to be very expensive,” Husain said. “However, if you have a smartphone, you can have apps that you can access anywhere in the world. The particular app we are using provides relaxing sounds and images as well as meditation exercises.”