This student wants to make sure the world ‘restores their names.’ 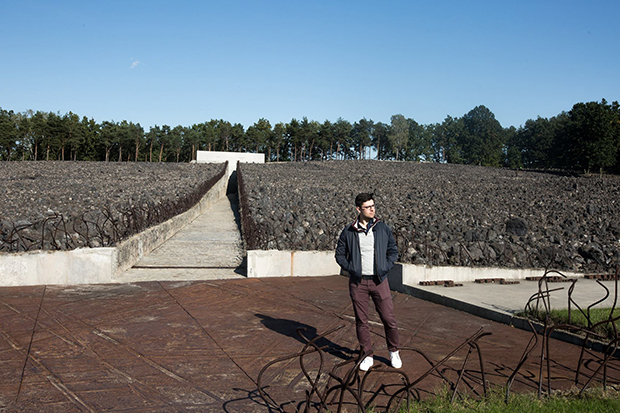 Growing up, Elan Kawesch ‘20 heard that his extended family members had perished during the Holocaust, though he never learned more about who they were. Kawesch knew that none of his great-grandparents had been in the concentration camps, though eight of his great-grandmother’s siblings were taken from Kolomyia – a former Polish town in what is now Ukraine – to the Belzec concentration camp in Poland.

“I remember walking through this memorial in Belzec and seeing the name of each town where people were sent from, and I came across the town I knew my family was from,” said Kawesch, who is from Brookline, Massachusetts.

“And standing there at that memorial in the Polish countryside, I started a Google search and learned that right there was where my family was killed,” he said. “My great-grandmother and one of her siblings survived, but eight others were brought to Belzec.” 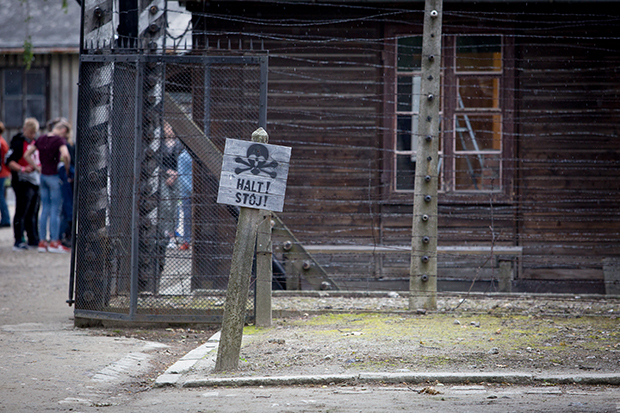 A chilling site adjacent to the living quarters at Auschwitz-Birkenau

That moment has had a profound impact on Kawesch, who now organizes annual trips to Europe through a program he launched called “Together, Restoring Their Names.” The trips, which consist of visits to sites of great importance to Jewish culture and history, are attended by groups of college students from across the Boston area.

The program offers participants an expenses-paid trip thanks to support from Combined Jewish Philanthropies’ IACT Campus Initiative. Almost 40 students, both Jewish and non-Jewish who represent different colleges from across New England, have made the trip over the last five years.

This year’s trip, which happened in June, included a four-day visit to Auschwitz-Birkenau. In addition, students participated in daily writing seminars while in Poland which required them to write a reflection piece based on prior research of concentration camps and their personal experience of the visit.

Some of their work has been picked up by national media: Cheyenne Paris, MA’20 wrote a poem about her experience which the Jewish Advocate published on July 10. 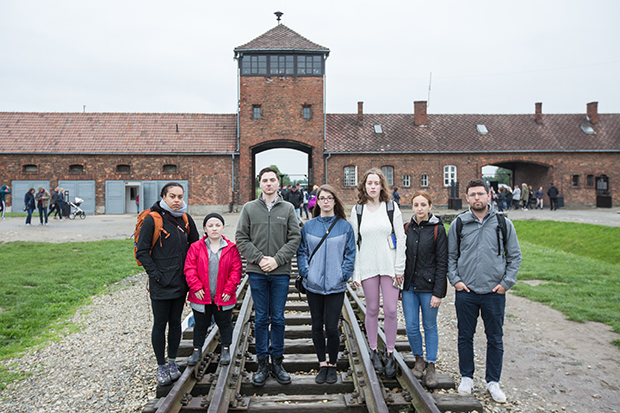 This year’s cohort of students from “Together, Remembering Their Names” at Auschwitz-Birkenau

“The program has expanded in a special way,” Kawesch said. “Jews and non-Jews find their connections to Holocaust education on the trip. We place a strong emphasis on finding that connection.”

“It’s more than an academic experience – there’s a sense of why this history is so important,” he added. “And it’s amazing to see how the trip impacts that students. It’s really motivated me to keep it going.”

Kawesch, who transferred to Brandeis from Suffolk University in 2016, took two gap years to work as a photojournalist. He also worked for Combined Jewish Philanthropies in Boston, which connected him with the resources necessary to organize the trip after he decided to launch Together, Restoring Their Names.

Though he is set to graduate from Brandeis in spring 2020, the business major and Near Eastern and Judaic Studies minor said he intends to keep the trip going.

“I do all the logistics myself, so it will be challenging but I want to keep the organization going,” he said. “We’re unique in that we’re completely student-run, and also because we bring Jewish and non-Jewish students together for a learning opportunity on a tragedy we should never forget.”