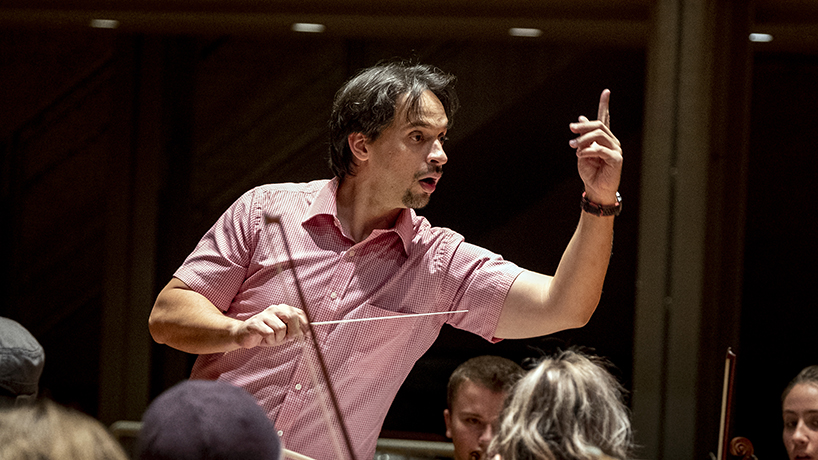 Love started Darwin Aquino’s life in St. Louis. In 2017, while conducting a production of the opera “Carmen,” he met his now-wife, and the two relocated here.

“We really love the city,” Aquino said on Tuesday’s episode of “St. Louis on the Air” on St. Louis Public Radio| 90.7 KWMU . “The musical scene here in St. Louis is a privilege.”

Now, Aquino is an assistant teaching professor of music and director of orchestral studies at the University of Missouri–St. Louis. He also serves as the conductor-in-residence of the Washington University in St. Louis Symphony Orchestra and music director of the Gateway Festival Orchestra of St. Louis. Aquino is an accomplished musician, noted composer and sought-after conductor who has led symphonies and operas around the world.

On Tuesday, he spoke with St. Louis Public Radio’s Jeremy D. Goodwin about life in St. Louis, two recent compositions that premiered locally and Aquino’s career progression. Working as a concert master in the Dominican Republic, he got a lucky break when the conductor stepped down. Although Aquino had no experience, he volunteered to take over.

“I started conducting at 18 years old, I want to say, so I’ve been conducting for almost 20 years now, more than 20 years,” Aquino told Goodwin. “I was trying to do everything at the same time because, believe me, in my country, the Dominican Republic, to earn a life as a classical musician is not very easy, so I was playing the violin, composing and conducting at the same time, just to be able to make it. At the beginning, I thought that maybe that was not very good, but I was wrong. That was the best experience that could have happened to me because I was able to go from one perspective to another and very easily move from conducting to composing to playing.”

Aquino believes that wearing those three hats is part of what gives him unique insight.

“If you compose, you know the intentions of a composer when you are conducting a work that is not yours,” he said. “You understand the sounds of the orchestra better, every detail the composer puts in the score when you conduct.”

To listen to Tuesday’s conversation, click here. Then catch Aquino, along with UMSL Director of Keyboard Studies Alla Voskoboynikova, on Sunday for the Gateway Festival Orchestra’s final show of the season, Piano at the Movies, at the 560 Music Center in University City, Missouri.