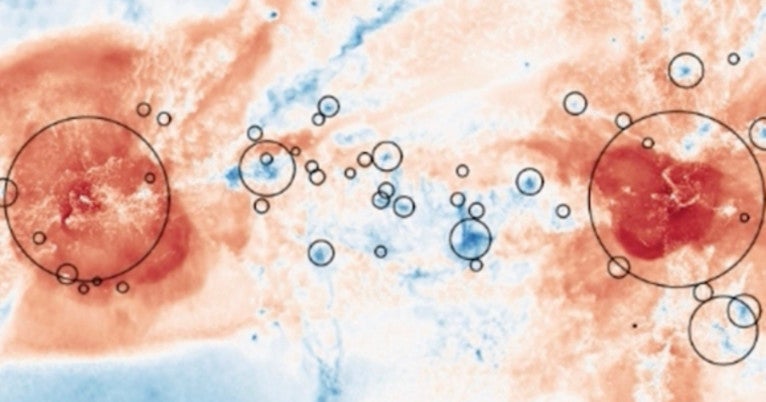 To understand the most ordinary matter in the universe — and the extraordinary things that happen to it — a Yale-led team of astronomers took a deep dive into the cosmic fog.

They learned intriguing new details about the dynamics of baryons, the collection of subatomic particles (including protons and neutrons) that accounts for much of the visible matter in the universe. Most baryons reside in the intergalactic medium (IGM), which is the space in-between galaxies where matter is neither bound to nor tugged upon by surrounding systems.

In a new study, Yale postdoctoral associate Nir Mandelker and professor Frank C. van den Bosch report on the most detailed simulation ever of a large patch of the IGM. For the first time, they were able to see how cold, dense gas clouds in the IGM organize themselves and react within much larger “sheets” or “pancakes” of matter in the vastness of space.

The findings appear in the Astrophysical Journal Letters.

Researchers have tried for years to piece together the structures and properties of the IGM — in part to test the standard model of Big Bang cosmology, which predicts that 80%-90% of baryons are in the IGM, but also to investigate the IGM’s crucial role as the universe’s fuel source.

“The reason galaxies are able to form stars continuously is because fresh gas flows into galaxies from the IGM,” said Mandelker, lead author of the study. “It is clear that galaxies would run out of gas in very short order if they didn’t accrete fresh gas from the IGM.”

Yet detecting the IGM’s gas has been supremely difficult. Unlike galaxies, which shine brightly in starlight, gas in the IGM is almost never luminous enough to detect directly. Instead, it has to be studied indirectly, through the absorption of background light. Such absorption studies allow researchers to learn about the density and chemical composition of gas clouds; in particular, they’re able to find out if star formation in nearby galaxies has polluted the gas with metals (elements heavier than helium).

With its new simulation, the Yale team learned quite a lot — including new properties of those aforementioned sheets of baryons.

“These are flattened distributions of matter, known as ‘pancakes,’ that extend across many millions of light years across,” said van den Bosch. “We found that rather than being smoothly distributed, the gas in these pancakes shatters into what resembles a ‘cosmic fog’ made up of tiny, discrete clouds of relatively cold and dense gas.”

Such dense clouds of gas had been thought to form only in areas of space close to galaxies, where the gas is naturally denser. But the new simulation shows that they also can condense out of the low-density IGM. The researchers said the phenomenon occurs naturally, as the result of an instability triggered by the efficient cooling of the gas.

Another aspect of this cosmic fog, based on the Yale simulation, is that it is pristine; it is too far away from any galaxy to be polluted with metals. According to Mandelker, this is significant because it explains recent, puzzling observations of dense, metal-free clouds at large distances from galaxies. Astronomers could not explain this phenomenon, but the new simulation suggests their presence may simply be the outcome of a natural process.

“Our work highlights the importance of properly resolving the properties of gas in the IGM, which is often neglected in favor of better resolving the central galaxies,” Mandelker said. “It has been very difficult to understand how the gas in the IGM could possibly become so dense and optically thick, especially when previous generations of cosmological simulations did not reveal any such dense gas in the IGM.”

Mandelker is a Tschira Postdoctoral Fellow in a collaborative program in astrophysics operated by Yale and the Heidelberg Institute for Theoretical Studies (HITS). The principal investigators of the program are van den Bosch and Volker Springel of HITS, who is a co-author of the new study. Freeke van de Voort of the Max Planck Institute for Astrophysics also is a co-author of the study.

The research was supported by the Klauss Tschira Foundation through the HITS Yale Program in Astrophysics and a grant from NASA.

A legacy of excellence: YAA Assembly and Convocation gets underway