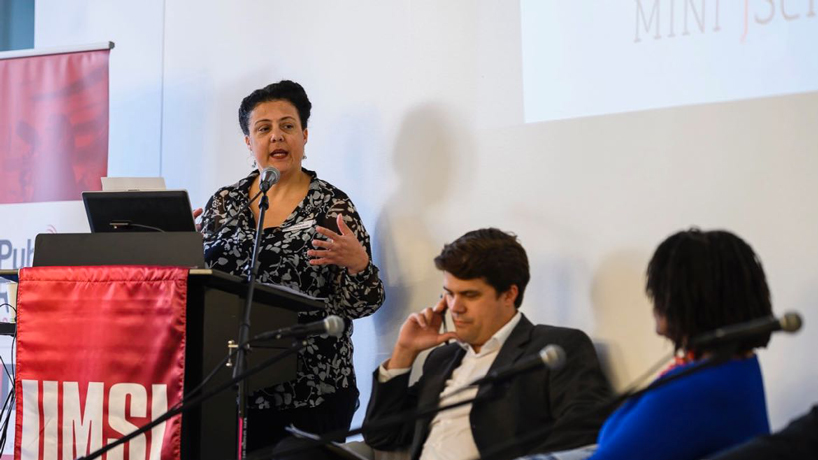 News consumers face a growing challenge to determine the credibility of information they encounter on television or online.

They need to be discerning about the sources of content and who is credible and who is not.

St. Louis Public Radio| 90.7 KWMU, a service of the University of Missouri–St. Louis, lent a hand earlier this year to readers and listeners looking to become more sophisticated “shoppers” in the modern media environment when it hosted the first “Mini Journalism School.”

Current, a nonprofit news service for and about public media in the United States, recently reported on the series of six weekly sessions held in April and May at UMSL at Grand Center.

About 100 people – among them both young professionals and older retirees – attended the evening sessions for a total cost of $120. They met with journalists from the station as well as KMOX (1120 AM), The St. Louis American and the Riverfront Times and discussed topics such as media literacy, libel law, food reporting and TV weather coverage.

“At this moment, we’re hearing a lot about ‘fake news,’ or seeing people sharing things that they think are news and maybe are not,” Kerley told reporter Joey Peters. “ We felt a need and a desire for people to know and understand more deeply how you can tell the news you’re getting is from a reputable source, but even going deeper than that, to understand the profession of journalism and why it’s important for democracy.”

The sessions were well received by those who attended, and Leslie Davis, the station’s special events director, said there are plans to hold another Mini J School next year.

To find out more about the course, read the full Current story here.