Opinion: Thereâ€™s a reason populists like Elizabeth Warren and Bernie Sanders are gaining on Joe Biden 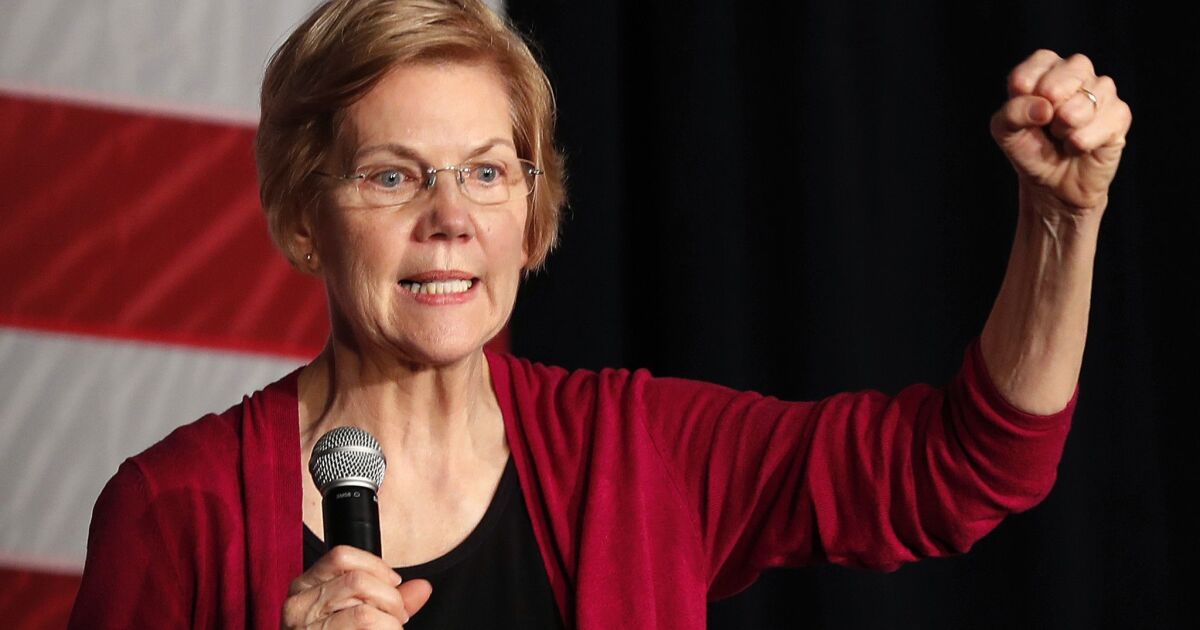 Looking beyond personalities, Thursdayâ€™s Democratic debate will be about three fundamentally different paths to 2020: embrace moderation; mobilize a â€œmajority-minorityâ€� electorate; or come out strongly as economic populists.

Populists Elizabeth Warren and Bernie Sanders are gaining on Joe Biden, not because they perform better on their feet but because they have the more compelling story of what ails America. The problem with a centrist politics of returning America to â€œnormal,â€� as Biden commends, is that normal meant a four-decades slide in the living standards for most Americans. That brand of normal brought us Donald Trump.

Centrism in practice has meant a Democratic Party in the pocket of Wall Street. When 15 Democratic senators voted with Republicans in March 2018 to weaken the Dodd-Frank Act, it was not because the constituents of senators such as Michael Bennet of Colorado, Tom Carper of Delaware or Tim Kaine of Virginia were urging more license for investment bankers. The vote was pure inside baseball on behalf of financial elites.

The all-too-accurate perception that Democrats havenâ€™t stood up for working people gave Trump his opening in 2016. His strategy was to racialize grievances that were in reality a complex stew of cultural and economic. Hillary Clinton, running as a social liberal on race, gender and other forms of identity, while taking large speaking fees from Wall Street, fell right into the trap â€” letting the plutocrat Trump play the populist.

As white-nationalist strategist Steve Bannon told me, in the 2017 interview that cost him his job, â€œThe Democrats â€” the longer they talk about identity politics â€” I got â€˜em. I want them to talk about racism every day. If the left is focused on race and identity, and we go with economic nationalism, we can crush the Democrats.â€�

Yet Democrats can hardly ignore race. African Americans who felt a surge of hope with Obama have suffered extreme whiplash under Trump. The dog-whistle racism of the Trump presidency has stimulated a profound racial reckoning among blacks and liberal whites, a painful conversation that is long overdue and worthy of great respect.

Yet if the 2020 presidential contest is defined primarily in terms of identity, Trump could win an election that he richly deserves to lose.

To win, the Democrats need to address race in the context of common pocketbook interests. For decades, the entire working and middle class, of all races and identities, has suffered in an economy that rigs the rules in favor of the wealthiest.

One candidate who narrates that story compellingly is Warren. Speaking at the Netroots Nation convention last year, she said: â€œAccording to Trump, the problem is other working people, people who are black or brown, people born somewhere elseâ€¦.They want us pointing our fingers at each other so that we wonâ€™t notice that their hands are in our pockets.â€�

If the election is about drastic economic change to benefit working people generally, it will bridge differences and not default to an election about identity. Trump talked a good game about making America great for working families, but he delivered little. In an election mainly about pocketbook issues, he is vulnerable.

Focusing primarily on mobilizing minority voters, by contrast, fails the test of arithmetic. Only 28% of Americans are considered nonwhite by the Census Bureau. Even if such a campaign won a narrow victory, it would leave America more bitterly divided than ever. The Democrats need a big win, based on a broad coalition.

While a centrist Democrat might appeal to moderate Republicans, there is far more pay dirt in a narrative and campaign that could bring home workaday voters in the heartland who once were the soul of the Democratic Party.

The oft-repeated clichÃ© that Democrats are torn between their hearts (sweeping economic reform) and their heads (winning the 2020 election) has it backwards. It is by embracing pocketbook reforms at least as radical as those of Franklin Roosevelt that the Democratic candidate can bridge over schisms of race and identity, win back some working-class Trump voters, and win the election.

Robert Kuttnerâ€™s new book is â€œThe Stakes: 2020 and the Survival of American Democracy.â€� He is co-editor of the American Prospect and teaches at Brandeis University.