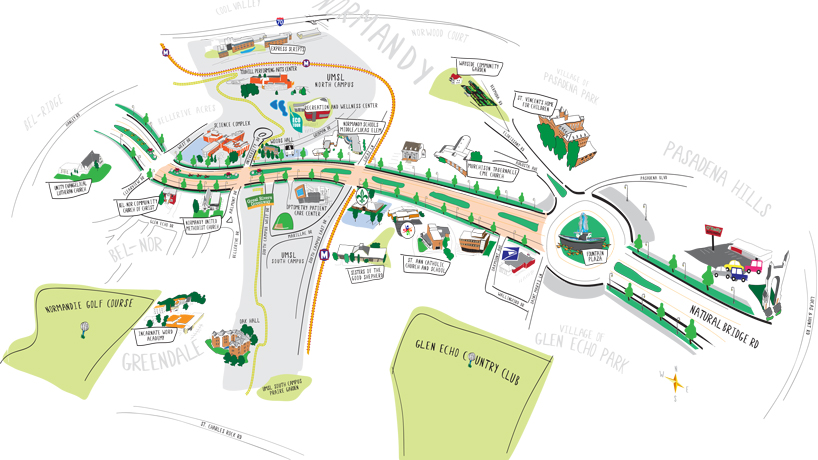 UMSL strives to be engaged with the surrounding community. (Graphic by Wendy Allison)

The latest edition of the Community Connection is due to land in subscribersâ€™ inboxes in the next week.

The monthly newsletter was created two years ago as a way to keep University of Missouriâ€“St. Louis neighbors informed about events and activities occurring on campus and in nearby parts of north St. Louis County.

It reaches more than 4,000 people in communities around campus, including residents, elected officials, business owners, community organization leaders and alumni.

â€œEach issue has a message from the chancellor, and itâ€™s been a great way for campus leadership to communicate directly with the community,â€� said Karl Guenther, director of UMSLâ€™s Anchor Institution Initiative who helps produce the newsletter. â€œWe also have easily accessible links if you want to explore working here, links if you want to track projects and business opportunities with the university, as well as things that the university has that are community assets like the Blanche M. Touhill Performing Arts Center, Gallery 210 and UMSL athletics. Itâ€™s a way to welcome folks onto campus and to help them make the most of whatâ€™s in their own backyard.â€�

The idea to create the newsletter grew out of a series of focus groups held with nearby business leaders, residents and elected officials.

â€œWe learned that folks did not feel that we were communicating as frequently or strongly with them as they would like,â€� Guenther said. â€œWe decided that we needed to start taking action on that, and one way to do that was to create what is now Community Connection. Itâ€™s not the only strategy for how we connect with the community and how we share information, but we wanted something that was reliable and that people could expect â€“ and where we could lift up not only what the university and community are doing together but also great things that are going on in areas around our campus.â€�

The August edition shared a story â€“ originally published in The St. Louis American â€“ about new investments the Urban League is making in Ferguson and Dellwood. The April issue links to one story from the Riverfront Times about the Breakaway CafÃ© offering jobs to Goody Goody Diner staff members whose regular positions were put on hiatus because of a fire. Last Septemberâ€™s touts the groundbreaking for the Boys & Girls Clubsâ€™ $12.4 million teen center in Ferguson.

Those stories are in addition to sharing news of initiatives and events spearheaded by UMSL and its partners such as Wednesdayâ€™s local business engagement event held with St. Louis County government scheduled for 7:30 a.m. to 4:00 p.m. in the J.C. Penney Conference Center.

Importantly, each issue also links to a place where readers can ask questions, leave comments or share additional stories to create a dialogue between neighbors and the university.