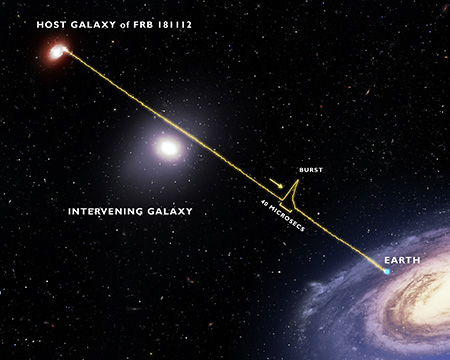 This illustration shows the radio signal from the fast radio burst FRB 181112 passing through the halo of a foreground galaxy on its way toward the telescopes that detected it on Earth. (Illustration Â© J. Josephides, Centre for Astrophysics and Supercomputing, Swinburne University of Technology)

Imaging with the Very Large Telescope (VLT) in Chile shows the host galaxy of the fast radio burst, with the position of the burst depicted by the red ellipses. The brighter galaxy located nearby is in the foreground, and the sight-line to the burst passes through the halo of this foreground galaxy. (Image credit: Prochaska et al., Science 2019)

Using one cosmic mystery to probe another, astronomers have analyzed the signal from a fast radio burst, an enigmatic blast of cosmic radio waves lasting less than a millisecond, to characterize the diffuse gas in the halo of a massive galaxy.

A vast halo of low-density gas extends far beyond the luminous part of a galaxy where the stars are concentrated. Although this hot, diffuse gas makes up more of a galaxyâ€™s mass than stars do, it is nearly impossible to see. In November 2018, astronomers detected a fast radio burst that passed through the halo of a massive galaxy on its way toward Earth, allowing them for the first time to get clues to the nature of the halo gas from an elusive radio signal.

â€œThe signal from the fast radio burst exposed the nature of the magnetic field around the galaxy and the structure of the halo gas. The study proves a new and transformative technique for exploring the nature of galaxy halos,â€� said J. Xavier Prochaska, professor of astronomy and astrophysics at UC Santa Cruz and lead author of a paper on the new findings published online September 26 in Science.

Astronomers still donâ€™t know what produces fast radio bursts, and only recently have they been able to trace some of these very short, very bright radio signals back to the galaxies in which they originated. The November 2018 burst (named FRB 181112) was detected and localized by the instrument that pioneered this technique, CSIROâ€™s Australian Square Kilometre Array Pathfinder (ASKAP) radio telescope. Follow-up observations with other telescopes identified not only its host galaxy but also a bright galaxy in front of it.

â€œWhen we overlaid the radio and optical images, we could see straight away that the fast radio burst pierced the halo of this coincident foreground galaxy and, for the first time, we had a direct way of investigating this otherwise invisible matter surrounding this galaxy,â€� said coauthor Cherie Day at Swinburne University of Technology, Australia.

A galactic halo contains both dark matter and ordinary (â€œbaryonicâ€�) matter, which is expected to be mostly hot ionized gas. While the luminous part of a massive galaxy might be around 30,000 light-years across, its roughly spherical halo is ten times larger. Halo gas fuels star formation as it falls in toward the center of the galaxy, while other processes (such as supernova explosions) can eject material out of the star-forming regions and into the galactic halo. One reason astronomers want to study the halo gas is to better understand these ejection processes, which can shut down star formation.

â€œThe halo gas is a fossil record of these ejection processes, so our observations can inform theories about how matter is ejected and how magnetic fields are threaded through galaxies,â€� Prochaska said.

Contrary to expectations, the results of the new study indicate a very low density and a feeble magnetic field in the halo of this intervening galaxy.

â€œThis galaxyâ€™s halo is surprisingly tranquil,â€� Prochaska said. â€œThe radio signal was largely unperturbed by the galaxy, which is in stark contrast to what previous models predict would have happened to the burst.â€�

The signal of FRB 181112 consisted of several pulses, each lasting less than 40 microseconds (ten thousand times shorter than the blink of an eye). The short duration of the pulses puts an upper limit on the density of the halo gas, because passage through a denser medium would lengthen the radio signals. The researchers calculated that the density of the halo gas must be less than a tenth of an atom per cubic centimeter (equivalent to several hundred atoms in a volume the size of a childâ€™s balloon).

â€œLike the shimmering air on a hot summerâ€™s day, the tenuous atmosphere in this massive galaxy should warp the signal of the fast radio burst. Instead we received a pulse so pristine and sharp that there is no signature of this gas at all,â€� said coauthor Jean-Pierre Macquart, an astronomer at the International Center for Radio Astronomy Research at Curtin University, Australia.

The density constraints also limit the possibility of turbulence or clouds of cool gas within the halo (â€œcoolâ€� being a relative term, referring here to temperatures around 10,000 Kelvin, versus the hot halo gas at around 1 million Kelvin). â€œOne favored model is that halos are pervaded by clouds of clumpy gas. We find no evidence for these clouds whatsoever,â€� Prochaska said.

The FRB signal also yields information about the magnetic field in the halo, which affects the polarization of the radio waves. Analyzing the polarization as a function of frequency gives a â€œrotation measureâ€� for the halo, which the researchers found to be very low. â€œThe weak magnetic field in the halo is a billion times weaker than that of a refrigerator magnet,â€� Prochaska said.

At this point, with results from only one galactic halo, the researchers cannot say whether the unexpectedly low density and magnetic field strength are unusual or if previous studies of galactic halos have overestimated these properties. ASKAP and other radio telescopes will use fast radio bursts to study many more galactic halos and resolve their properties.

â€œThis galaxy may be special,â€� Prochaska said. â€œWe will need to use FRBs to study tens or hundreds of galaxies over a range of masses and ages to assess the full population.â€�

In addition to Prochaska, Day, and Macquart, the coauthors of the paper include UCSC graduate student Sunil Simha and researchers at eight other institutions in Australia, the United States, South Korea, and Chile. This work was funded in part by the U.S. National Science Foundation and the Australian Research Council.