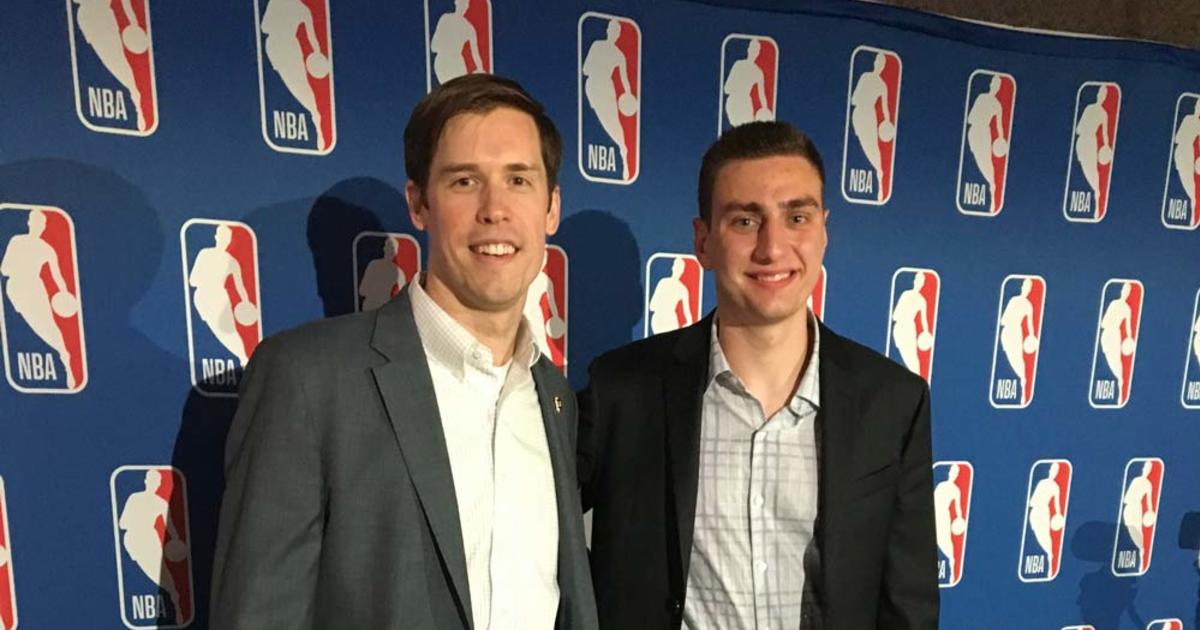 Zanca, who is pursuing a dual MBA/Master of Science in Business Analytics degree at Notre Dameâ€™s Mendoza College of Business, competed in the Hackathon final round on Sept. 21 with teammate C.B. Garrett, a recent graduate of Syracuse University. The competition, held at the NBA office in Secaucus, New Jersey, featured two tracks â€” basketball analytics and business analytics.

Zanca and Garrett won the basketball analytics track, earning prizes that include lunch with NBA Commissioner Adam Silver, tickets to an NBA game, a gift card to the NBA Store and a technology product. A total of 27 teams representing 36 colleges and universities competed.

â€œOur research project was â€˜Challenge Accepted: Identifying Optimal Cases for Exercising NBA Coachâ€™s Challenges,â€™â€� said Zanca, who interned this summer with the Indiana Pacers and has been involved with analytics projects for the Notre Dame Athletic Department. “My partner and I used an expected value approach to model the expected points gained on different types of calls that can be challenged under the NBAâ€™s newly implemented coachâ€™s challenge.â€�

After an initial application process, each team submitted a research abstract and executed a research project using data supplied by the NBA prior to the event. Projects were selected based on their novelty and usefulness.

On the day of the event, teams collaborated with league analytics professionals to finalize their research projects before participating in a sprint coding event. Each team then presented its research project and findings to a panel of judges. Projects were evaluated based on creativity, rigor of statistical work and the quality of presentation.

The judges for the basketball track were Cathy Engelbert, WNBA commissioner and former CEO of Deloitte; Nate Silver, founder and editor-in-chief of FiveThirtyEight; Charlie Rohlf, senior director of basketball technology and products for the NBA; and Phil Chang, senior manager of basketball analytics for the Los Angeles Lakers.

Zanca credits the choice of topic and presentation style for their win.

â€œThe NBA just announced the implementation of the coachâ€™s challenge in July 2019, so our topic was very timely and relevant,â€� said Zanca, who aspires to work for the NBA or one of its teams, using analytics to help the organization make better-informed decisions after he graduates from Notre Dame in 2020. â€œWe also were very intentional to articulate our findings in a way that coaches and teams would find actionable and useful.â€�

The NBA Hackathon has gained in popularity since its launch in 2015, especially as analytics plays an increasingly vital role in sports. The competition is intense. Sports Illustrated described it as â€œa slumber party with code and algorithms replacing junk food and ghost stories, combined with the time-sensitive pressure of Cupcake Wars.â€�

â€œThe biggest challenge was balancing the research project with the demands of school and extracurriculars in the weeks leading up to the competition,â€� said Zanca, who currently supports University Vice President and James E. Rohr Director of Athletics Jack Swarbrick on stats-related projects. Last year, he worked with Fighting Irish Media, the departmentâ€™s media group, on an analysis of television ratings.

â€œThat being said, I couldnâ€™t have done this project without the skills Iâ€™ve learned in the past year at Mendoza, from data management to data visualization to storytelling.â€�

Originally published by Carol Elliott at conductorshare.nd.edu on Sept. 25.