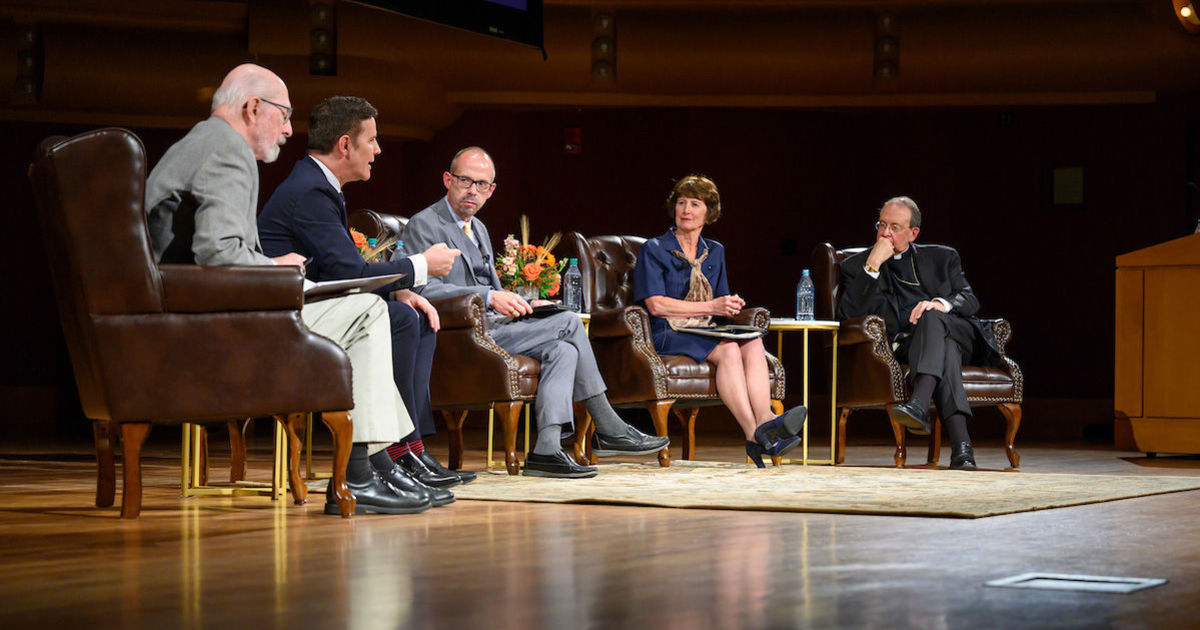 In opening remarks for the inaugural event of the 2019-20 Notre Dame Forum, â€œâ€˜Rebuild My Churchâ€™: Crisis and Response,â€� Rev. John I. Jenkins, C.S.C., president of the University of Notre Dame, welcomed a near-capacity crowd in the Leighton Concert Hall of the DeBartolo Performing Arts Center to hear an expert panel report on â€œThe Church Crisis: Where Are We Now?â€�

â€œWe will try to take an honest and informed look at the clergy sex abuse scandal and responses to it as we attempt to discern how we might best respond,â€� said Father Jenkins. â€œOur reflections will be informed, of course, by the facts, but also by faith in God who brings life out of death â€” who shines light in darkness.â€�

Father Jenkins called for this yearâ€™s forum to examine the sexual abuse crisis in the Catholic Church and explore possible reforms. This yearâ€™s theme echoes Godâ€™s summons to St. Francis of Assisi during a time of Church corruption in the late Middle Ages.

Steinfels, named Notre Dameâ€™s 2003 Laetare Medalist with his wife, Margaret Oâ€™Brien Steinfels, opened the discussion with an acknowledgement: â€œI have followed and written about the sex abuse story for about three decades, and the one thing I am most certain about is that most of us, myself very much included, know much less about this painful, stomach-churning scandal than we think we know.â€�

Turning to some statistics, Steinfels cited the John Jay Reportâ€™s finding that from 1950 to 2002, 4 percent to 5 percent of Catholic clergy sexually abused well over 10,000 young people. According to Steinfels, the numbers of those abused by clergy dropped precipitously in the 1980s and â€™90s, and they continued to do so following the implementation of the U.S. Bishopsâ€™ zero-tolerance policy in 2002. Steinfels said the count was around 600 cases annually between 1965 and 1985, and about 20 cases annually since 2004.

Steinfels said, â€œStatistics like this can be dangerous, because they can blind us to the excruciating, life-derailing devastation caused by a single case of abuse.â€�

Still, said Steinfels, the statistics cannot be ignored, either. â€œSuppose if current horrid rates of deaths by gun violence or opioid overdose declined, like Catholic clergy sex abuse cases, by almost 97 percent. Would we pretend that nothing significant had happened?â€� he said. â€œAnyone who obscures this dramatic drop [in clerical sex abuse] is simply not telling the truth.â€�

Cruz, a survivor of clergy sex abuse, initially had his claims dismissed by Pope Francis. He later received an apology from the Vatican and has become an internationally recognized advocate for other victims. He told the Notre Dame Forum audience that he was educated at a Holy Cross school in Chile and spent one and a half years at Notre Dame in Moreau Seminary, where, under the pastoral care of Holy Cross priests, he found some healing from the abuse he had suffered.

â€œIf I am here today, itâ€™s because my faith has sustained me,â€� Cruz said.

He offered words of encouragement to anyone listening who may also be a victim: â€œI want you to know itâ€™s really hard to speak out and tell your story, but also so many people are waiting to lend you a hand, and to help you in that horrible pain.â€�

Cruz also criticized factions within Catholicism that have weaponized the pain of victims to advance what he called an â€œultra conservative agendaâ€� to challenge the papacy of Pope Francis.

McChesney, the former law enforcement professional, listed some disappointments with the handling of the Catholic sex abuse crisis, as well as some predictions. She especially emphasized the need for better selection of those entering seminaries to become priests versus formation once they are in seminary. â€œIf you donâ€™t have the right candidates, you can never form them properly,â€� McChesney said.

She pointed to lack of interest from law enforcement, failure to act upon victimsâ€™ recommendations, lack of research, and the Churchâ€™s slow embrace of technology as areas of disappointment and opportunities for improvement in dealing with the sex abuse crisis. McChesney also predicted that there would continue to be cases brought against Church authorities, that the issue would continue to be used to promote personal agendas, that there would be civil, canon and criminal law changes over time and that the Church will continue to be slow to reform.

Last to speak on the panel was Archbishop Lori, who said: â€œI have been the bishop nearly 25 years, and in that ministry, there have been a lot of learning curves. I donâ€™t think any of them have been as steep as discovering, learning and struggling to deal in some adequate way with the ugly specter of child abuse.â€�

According to Archbishop Lori, learning how to listen to victims â€” how to put them in the driverâ€™s seat in that listening context â€” has been an essential skill in addressing clerical sex abuse and identifying areas for reform. He conducted 18 listening sessions with victims and said he heard two things loud and clear: 1. People want bishops to be held accountable â€” for their own behavior, and for negligence in handling other cases. 2. People want more lay voices at the table.

Archbishop Lori also spearheaded a system for reporting on bishops, which he calls the â€œmetropolitan model,â€� in which reports against a bishop are evaluated by two retired judges who sit on an independent review board and whose role it is to report to local law enforcement if appropriate, and also by the Papal Nuncio. In this way, reports from within a diocese can be independently evaluated outside of the accused bishopâ€™s diocesan structure. Archbishop Lori was able to test this model in his investigation of the now-former bishop of Wheeling, noting that it was â€œnot perfect â€” rough, bumpy, rocky â€” but it least it shows [this system] could work.â€�

In closing, Archbishop Lori said: â€œI love the Church. We all love the Church. We love its mission. We are all fallible human beings made up of weaknesses and blind spots, and sometimes we are tragically flawed. Weâ€™ve got to address this. Weâ€™ve got to continue being held accountable. The Churchâ€™s mission to spread the good news of Jesus Christ depends on it.â€�

Since its establishment in 2005, the Notre Dame Forum has featured major talks by leading authorities on issues of importance to the University, the nation and the larger world, including the Catholic artistic heritage, the challenges and opportunities of globalization, the role of presidential debates, immigration, sustainability and the place of faith in a pluralistic society.