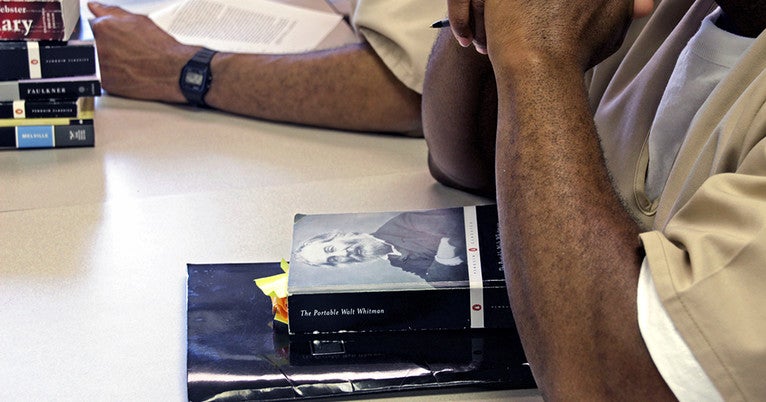 â€œMany of us here have potential that was never realized,â€� said Luis (last name withheld), an incarcerated student, when reflecting on his experience in two Yale English classes. â€œEducational opportunities like this, which actually challenge us, help us realize what weâ€™ve had all along.â€�

The Yale English classes Luis took were offered during the first summer of the Yale Prison Education Initiative (YPEI) at Dwight Hall, which commenced officially in July 2018 under the leadership of founding director Zelda Roland, â€™08 B.A., â€™16 Ph.D. As of fall 2019, Luis has completed five Yale classes, two in English, one in Latin, one in art, and one in sociology.

In the summer of 2018, YPEI offered four for-credit Yale Summer Session courses at two Connecticut prisons. At Manson Youth Institution in Cheshire, recent M.F.A. graduates of the Yale School of Art instructed 10 students in two sequential introductory art classes, â€œBasic Drawingâ€� and â€œPainting Basics,â€� in part funded by the Art and Social Justice Initiative, an initiative funded by Marta Kuzma, the Stavros Niarchos Foundation Dean of the School of Art (see below). Meanwhile, at MacDougall-Walker Correctional Institution in Suffield, 12 students took two staples of the introductory-level Yale English curriculum, â€œReading and Writing the Modern Essayâ€� (ENGL 120) and â€œReadings in American Literature,â€� (ENGL 127) with Yale English instructors. Nearly 600 people applied for the 12 slots in these classes at MacDougall-Walker.

For summer 2019, YPEI returned with four for-credit classes from the School of Art and Yaleâ€™s sociology, philosophy, and classics departments. In the past, professors from the Yale Law School and Yale Divinity School have taught â€œinside-out classesâ€� in Connecticut prisons, which bring typical Yale students and incarcerated students together for class meetings inside the prisons that focus on criminal justice and pastoral wisdom respectively. But YPEI marks the first time incarcerated students have earned Yale College credits for their coursework. Much like typical students in Yale Summer Session courses, students in YPEI classes were issued Yale transcripts with individual class credits earned, which they can later use towards a degree-granting program at a college or university.

How YPEI came to be

Prior to summer 2018, many Yale professors had already been devoting significant time to teaching in prisons, explained Roland, whose own experience with higher education in prisons began several years ago when she was still an art history graduate student at Yale. The incarcerated students she encountered during her time with the Wesleyan Center for Prison Education at Cheshire Correctional Institution were among â€œthe brightest and most exceptional studentsâ€� sheâ€™d ever had, Roland said, adding that many Yale faculty she met along the way shared this sentiment from their own experiences teaching in prison.

A few years later, inspiration struck Roland after a summer spent teaching non-matriculated, non-degree-seeking students on Yaleâ€™s campus during Yale Summer Session. She went to Jeanne Follansbee, the dean of Yale Summer Session, with an idea.

â€œI asked, â€˜If there was some way I could make it revenue neutral, could we potentially use one of the Connecticut correctional facilities as an off-site summer session site?â€™ We do Yale in Paris, Yale in London. â€¦ It would even be in line with our online Open Yale courses philosophy.â€�

Follansbee was excited by this proposal. With the support of Dwight Hall and the Yale College Deanâ€™s Office; the help of James Jeter, the inaugural Tow Foundation Fellow for YPEI at Dwight Hall and a formerly incarcerated student from the Wesleyan program; and support from external donors, Roland was able launch the first for-credit Yale courses at Manson and MacDougall during summer session 2018.

Except for their setting, the four classes proceeded more or less like their on-campus counterparts, and that fact was important to Roland, the teachers, and the students. Course expectations, contact hours, and academic regulations for classes in prison are identical to those on the Yale campus, Roland emphasized.

â€œIf youâ€™re expecting an incarcerated student to do the same work that students are doing on campus and receiving credit for, then not giving the incarcerated students credit is necessarily sustaining inequality,â€� said Roland. â€œA lot of educational programs in prisons are sort of continuous. They just run indefinitely. So instead, to have a Yale class that starts and ends, and to be able to say as a student, â€˜I finished this; I achieved this. Itâ€™s done, and itâ€™s something that I can carry with me wherever I goâ€™ â€” thatâ€™s so important.â€�

Liberal arts for all

YPEI is a member of the Bard Prison Initiativeâ€™s Consortium for the Liberal Arts in Prison, which is based on the fundamental belief is that â€œa liberal education can transform the lives of individual students, and our public institutions, in ways that far exceed the prevailing response to crime, punishment, and the need for change.â€�

â€œBy bringing a serious liberal arts education to incarcerated students, programs like YPEI give students more than just a better chance of improving their lives when they are released from prison,â€� said Caleb Smith, professor of English at Yale, who taught â€œReadings in American Literatureâ€� last summer at MacDougall-Walker.

For some of them, intellectual work is not a means to an economic end. It has its own value.

â€œI’ve seen how reading and writing become ways for incarcerated people to live, to make it through their days, on the inside. For some of them, intellectual work is not a means to an economic end. It has its own value. Encountering their intelligence and their toughness makes us better teachers, too,â€� Smith said.

Other universities are already looking to YPEI as a model for bringing for-credit liberal arts courses into prisons. Roland said that Harvard is leveraging the success of YPEI to establish their own program for incarcerated students. To Roland, itâ€™s only natural for universities like Yale to take this step.

â€œI spend a lot of time looking at the Yale College mission statement and thinking about how prison education is such an appropriate answer to it,â€� she said. â€œâ€˜To find exceptional students from all over the country and the world who show great promise â€¦â€™ If thereâ€™s one truly exceptional place where students show promise but have been deprived of any educational opportunity, itâ€™s students in Connecticutâ€™s own prisons.â€�

Sarah Mahurin, dean of Timothy Dwight College and the instructor for â€œReading and Writing the Modern Essayâ€� at MacDougall-Walker, said she agreed with Roland about how YPEI aligns with the work Yale already does.

â€œYPEI expands Yaleâ€™s educational mission outward,â€� said Mahurin. â€œOur YPEI student population has been disproportionately underserved, and â€” not coincidentally â€” is eager to learn: They often completed required readings twice in advance of our class discussions.  Itâ€™s exciting and important to understand that this level of intellectual energy and commitment exists in all kinds of spaces, not only on traditional university campuses.â€�

The power of education

When the first 22 students in YPEI were asked to reflect on their experiences at the end of last summerâ€™s semester, they were eager to share how much the classes repaid them by building confidence in their own minds and voices â€” in addition, of course, to the Yale credits they earned. [Note: all the incarcerated studentsâ€™ last names have been withheld.]

â€œComing in, I had no sense of accomplishment or achievement,â€� said Evan, a student in the MacDougall English classes. â€œMahurinâ€™s class was the biggest accelerator to my confidence.â€�

Evan said that writing creative non-fiction had another major benefit for him. â€œI’ve been through a lot in life, and in her class, I used the nonfiction essays as kind of a therapeutic process just to write down what Iâ€™ve been through and kind of let that stuff go,â€� he said. â€œEducation as a tool is wonderful; itâ€™s miraculous. I see it working in my life.â€�

â€œProfessor Mahurin and Professor Smith were both amazing teachers who brought out the best in us,â€� added Adrian, another student in the English classes. â€œIt just breeds confidence in what you can do, and that’s what you need in life to succeed â€” confidence. Knowing that you can do and be something else.â€�

One student, Bryan, wanted to emphasize that there are positive effects of these classes that â€œtranslateâ€� to the broader community.

â€œThis is not just about the 12 people you see here,â€� he said, gesturing to the other students around the Yale seminar table and the stacks of required reading in front of them. â€œIâ€™m a ninth-grade drop-out, so most of the things I learned about reading and writing I learned in prison from other inmates. Most classrooms here are just tables in the cell blocks with people who know more than you. In every block that one of us from this class goes back to, the conversation is about whatâ€™s going on in this room.â€�

Bryan said the positive impact of this educational opportunity has rippled out to communities beyond the prison too. He said that the phone conversations heâ€™s had with his family about what he was learning in the Yale classes encouraged his daughter to go back to finish high school â€” making her the first high school graduate in his family â€” and even sparked an interest for her to pursue higher education.

Jeter, the Tow Foundation Fellow who works on YPEI with Roland, is himself proof of the value of prison education programs. With the credits he earned through Wesleyanâ€™s Center for Prison Education, Jeter was able to apply to and matriculate in fall 2018 at Trinity College, where he is currently completing his college degree.

It was liberating because it allowed me to think on so much, really challenge myself, and gain some confidence in my own thought process.

Of his own experience as an incarcerated student, Jeter said, â€œIt was liberating because it allowed me to think on so much, really challenge myself, and gain some confidence in my own thought process.â€� He emphasized that getting credit for those courses has also influenced his life trajectory after prison.

This semester, an ad hoc faculty committee is convening to determine YPEIâ€™s future, including whether it will be able to offer courses year-round. In the meantime, YPEI is putting on a series of special not-for-credit lectures by Yale faculty across disciplines, and not-for-credit semester-long seminars in literature, art, and Latin. To date, lectures have been given by the following Yale faculty: Stephen Pitti, Samuel Moyn, Kathryn Slanski, Kishwar Rizvi, Paul North, Jason Stanley, Caleb Smith, Monica Bell, Emily Greenwood, Lisa Lowe, Leah Mirakhor, Stephen Poland, and Brian Kane. Forthcoming lectures will be given by Emily Bazelon and Kathryn Lofton, among others.

Faculty, graduate students, and undergraduate students who are interested in getting involved with YPEI at Dwight Hall should contact Roland and Jeter via email at ypei@dwighthall.org

The Art and Social Justice Initiative was started in 2017 by Marta Kuzma, the Stavros Niarchos Foundation Dean of the Yale School of Art, to â€œrecognize that graduate art education needs to explore the intersections of art through economic, social, political, and cultural perspectives.â€� The school-wide initiative will contribute to scholarships, promote research, extend pedagogical offerings, and explore practical approaches and projects that foster critical and collective consciousness around social engagement and civic dialogue. As the first program to be launched by this initiative, the Yale School of Art partnered with YPEI at Dwight Hall to offer the two summer art classes program to incarcerated students at Manson, and continued in Summer 2019 with the class on â€œVisual Thinkingâ€� offered at MacDougall-Walker.