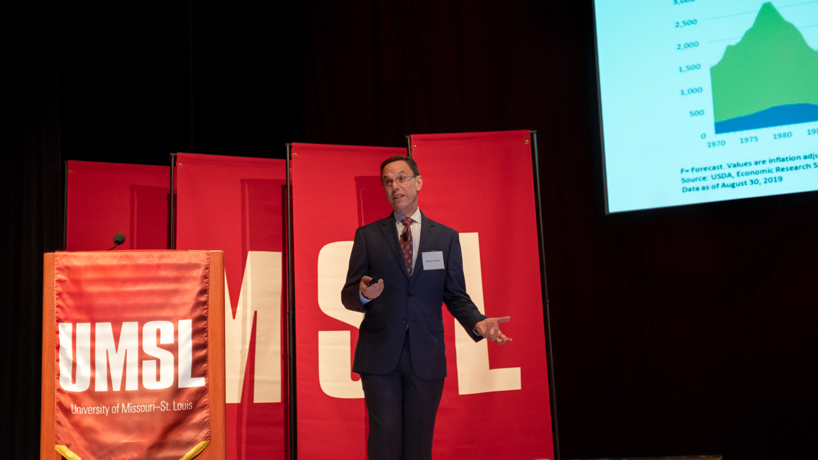 A historically rainy spring and international trade disputes sowed seeds of doubt among economists, farmers and other agriculture professionals in 2019.

Despite these challenges, the United States Department of Agriculture predicts a better-than-expected corn crop and record livestock production this year.

Thatâ€™s the message Warren Preston, deputy chief economist for the USDA, brought to the University of Missouriâ€“St. Louis on Tuesday morning at the Blanche M. Touhill Performing Arts Center. It was part of Prestonâ€™s keynote address at the forum titled Agriculture, Markets & Supply Chains Series: Trade, Floods & the Future.

The event included several presentations and two panels on topics such as the agricultural economy, agricultural trade, flooding and supply chain management. It was presented in partnership by St. Louis Regional Freightway, the UMSL Center for Transportation Studies, UMSL Department of Supply Chain & Analytics and the University of Missouri Food and Agricultural Policy Research Institute.

George Zsidisin, the John W. Barriger Professor of Supply Chain Management and director of the Center for Transportation Studies at UMSL, said the event was well attended and the audiences were engaged all day. He said collaborating with the USDA gave the UM System the opportunity to leverage its strengths and show how Missouri fits into national and international issues.

â€œI think itâ€™s an indication of the good work thatâ€™s being done at Mizzou as well as UMSL,â€� Zsidisin said.

Preston supplied a broad perspective on the current state of U.S. agriculture and the outlook for the near future. Extreme weather events, such as the recent flooding in the Midwest, and trade retaliation from China have created some uncertainty in the industry, but there are also positive signs.

Perhaps the most encouraging â€“ and contentious â€“ news of the day was the USDAâ€™s forecast for American corn. This spring was record setting in terms of moisture received throughout the Corn Belt, which delayed farmersâ€™ planting progress.

â€œWeâ€™ve had a lot of skepticism about the National Agricultural Statistics Service estimates of corn acreage,â€� Preston said. â€œThe industry thought that corn acreage would be down quite a bit because of that late wet spring, and they thought that a lot of farmers would turn to soybeans instead if they could get in the field at all.â€�

â€œI think, finally, the analysts started to accept the USDA projections,â€� Preston said. â€œThey went through the KÃ¼bler-Ross stages of grief. I think, at first back in March, it was complete denial. They didnâ€™t believe our numbers at all. They were shocked. There was anger. There was bargaining, â€˜Go back out and resurvey! What are you doing wrong? What are you missing?â€™ There was depression, and finally, I think there was acceptance.â€�

Patrick Westhoff, director of FABRI-MU, took the stage after Preston and provided a local perspective with a look at the financial prospects of Missouri farms. The picture is not as grim as the farm bankruptcy crisis of the 1980s, but there is some cause for concern. Missouri net farm incomes are still lagging compared to boom years earlier this decade.

â€œWe actually had some amazing levels of net farm income in Missouri by the USDAâ€™s reckoning in 2013 and 2014,â€� Westoff said. â€œWell over $3 billion per year for two straight years.â€�

Net incomes dropped steeply in 2015 due to factors that limited crop production and low prices on livestock products. Since then, they have gradually increased and are predicted to continue this year, but they are still far below the peak in 2013.

Later in the day, the topic of discussion shifted from agriculture to supply chain issues.

Zsidisin provided balance to the discussion by representing the customerâ€™s perspective â€“ people who are buying agricultural products from Missouri.

His talk focused partly on his research specialty, risk in supply chains, but he also covered the risks of price volatility, which is an ever-present issue in agricultural markets.

â€œWe have been fortunate,â€� Zsidisin said. â€œFor many of the basic commodities, the agricultural products that are grown here in Missouri, most of them have been relatively stable.â€�

But pricing is always a concern, especially because agricultural producersâ€™ margins are relatively thin, so any shift in price has a significant effect.

Zsidisin believes the forumâ€™s programming is indicative of the strength of the UM System.

The collaborative efforts between UM System schools and outside entities, like the USDA, showcase how problems can be solved at regional, national and international levels.

He said, â€œItâ€™s an example of how we can leverage the UM System to make peopleâ€™s lives better.â€�