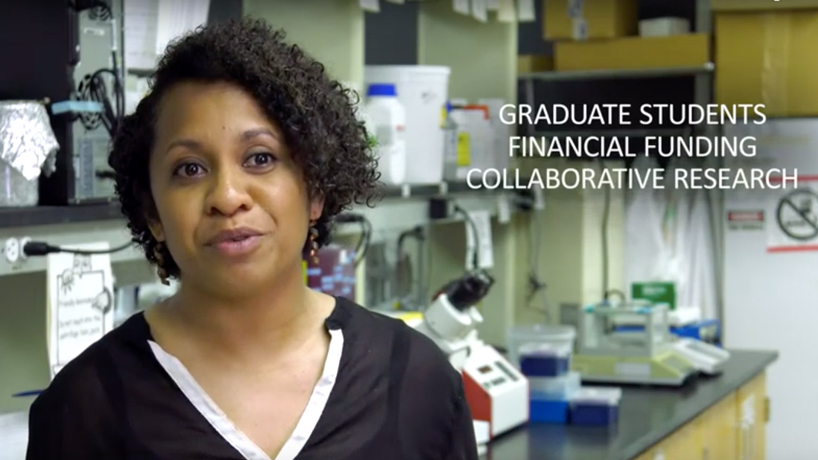 Samoa Asigau, a 2018 PhD graduate from Papua New Guinea, is just one of the former and current students offering testimonials in a new promotional video for the Whitney R. Harris World Ecology Center. (Screenshot from promotional video)

There are no better ambassadors for the Whitney R. Harris World Ecology Center than the affiliated students at the University of Missouriâ€“St. Louis who have earned degrees in biology and gone on to work around the globe in ecology and conservation.

â€œWe have a worldwide network now,â€� said Patricia Parker, the Harris Centerâ€™s interim director and the E. Desmond Lee Endowed Professor in Zoological Studies in the Department of Biology. â€œWe have had more than 275 graduates with masterâ€™s degrees or PhDs who have come from 38 countries.â€�

Itâ€™s those students and graduates who are featured in a new recruitment video highlighting the way the center works to cultivate a new generation of scientific leaders working to preserve and protect biodiversity around the globe.

The center offers financial support for education and training through six endowed fellowships and has a competitive grants program that helps even more students launch their research.

â€œThe department is great and the Harris Center is great because it provides you that environment to thrive academically but also socially too, which is really, really important,â€� said Samoa Asigau, a 2018 PhD graduate from Papua New Guinea. â€œIt creates an opportunity for a lot of students here in the department to collaborate.â€�

Doctoral candidate Emma Young suggests all first-year students trying to plan pilot studies apply to the Harris Center. The funding available to support those initial studies helps students gather data that can be used to boost their applications for national grants.

â€œIt also provided me funding to go to different scientific conferences that have really helped integrate me into the scientific community,â€� doctoral candidate Matt Austin said.

Vicki Brown of Beyond Motion Productions produced a series of videos for the Harris Center, including a promotional video that highlights some of the history of the center and its collaborations with the Missouri Botanical Garden and Saint Louis Zoo as well as longer version of the recruitment video.

To see all the videos, visit the Harris Centerâ€™s channel on YouTube.