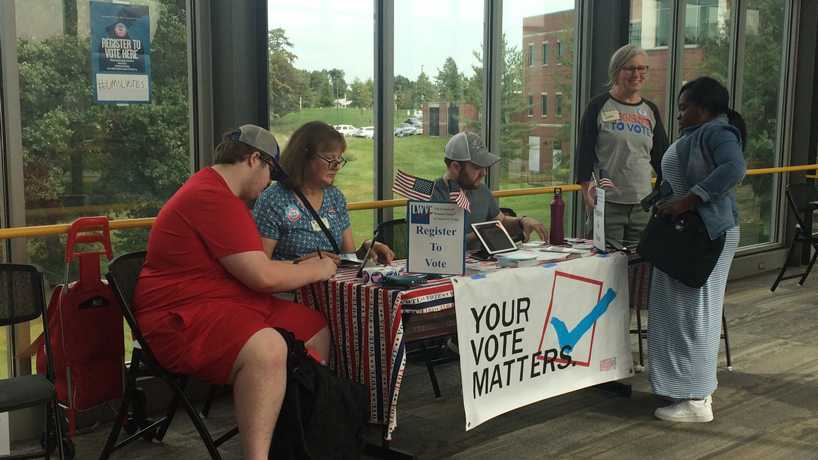 They were there to register students and other campus community members on National Voter Registration Day in just the latest example of how the University of Missouriâ€“St. Louis is working to foster civic engagement.

That work continues to pay off, as seen most recently in the release of a report from the National Study of Learning, Voting and Engagement conducted at Tufts University on voter participation in the 2018 midterm elections. It showed that UMSL students voted at a 17 percent higher rate â€“ 56.1 percent â€“ than the national average.

That came two years after UMSL showed the highest voter participation in the country â€“ 67.4 percent â€“ in a Tufts study looking at the 2016 presidential election.

â€œWe really do have engaged students in their community, so it was really nice when I got the report,â€� said Patricia Zahn, UMSLâ€™s director of community outreach and engagement, who helps coordinate many of UMSLâ€™s initiatives to boost civic engagement. â€œI was thrilled.â€�

Student voter participation spiked in 2018 compared to four years earlier as political engagement grew across the country. Whereas 2014 election saw only 19.7 percent of all students turn out at the polls, that number rose to 39.1 percent last year.

UMSL, already higher than the national average, saw an even bigger jump from 25.7 percent in 2014.

â€œIf you look through the report, you will see that we increase across the board â€“ by field of study, by gender, by race and ethnicity,â€� Zahn said. â€œEverybody was engaged. I think thatâ€™s what we were really working for.â€�

There has been a concerted effort made across campus in recent years to help students be more involved.

To that end, UMSL created the Civic Engagement Coalition to take a more coordinated approach to driving voter participation with programming such as the events planned around Constitution Day. Itâ€™s helped ensure those efforts were reaching different student organizations.

Members of the Associated Students of the University of Missouri as well as UMSLâ€™s Political Science Academy have contributed to the work. Two ASUM members â€“ Jennifer Mossgraber and Ami Diallo â€“ were CEEP fellows last year, and Moser has taken on that role this year. They have all helped coordinate voter registration drives throughout the year, not just before one election.