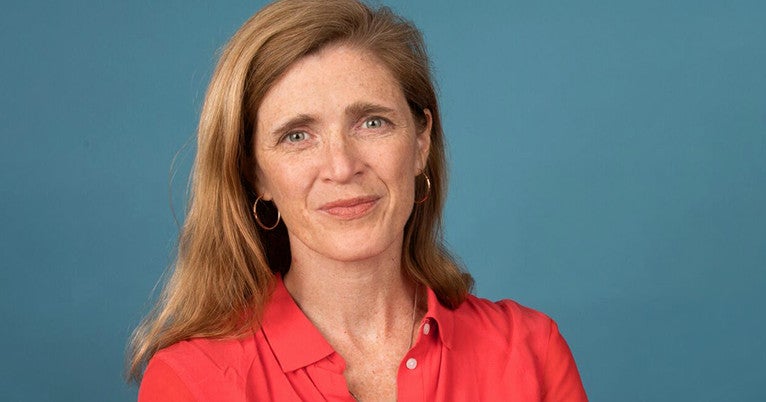 â€˜The Education of an Idealistâ€™: Samantha Power in conversation with Jake Sullivan and Harold Koh

Samantha Power, the 28th U.S. ambassador to the United Nations, will speak on campus on Wednesday, Oct. 2 as part of â€œThe Big Pictureâ€� lecture series held under the auspices of the Brady-Johnson Program in Grand Strategy.

Powerâ€™s talk is titled â€œThe Education of an Idealist.â€� She will be joined by Jake Sullivan and Harold Koh for the event, which will take place at 2 p.m. in Levinson Auditorium, Yale Law School, 127 Wall St.

Power served as ambassador to the United Nations from 2013 to 2017. From 2009 to 2013, she served on the National Security Council as special assistant to the president and senior director for multilateral affairs and human rights. Power, the author of the new memoir â€œThe Education of an Idealist,â€� is now the Anna Lindh Professor of the Practice of Global Leadership and Public Policy at the Harvard Kennedy School.

Sullivan is a former national security advisor to Vice President Joe Biden and previously served as director of policy planning at the U.S. Department of State and deputy chief of staff to Secretary of State Hilary Clinton. He is currently the Martin R. Flug Visiting Lecturer in law at the Yale Law School as well as a distinguished practitioner in the Brady-Johnson Program in Grand Strategy.

Koh was the assistant secretary of state for democracy, human rights, and labor from 1998 to 2001 and the 22nd legal advisor of the U.S. Department of State. One of the countryâ€™s leading experts in public and private international law, national security law, and human rights, Ko is currently a Sterling Professor of International Law at Yale Law School.