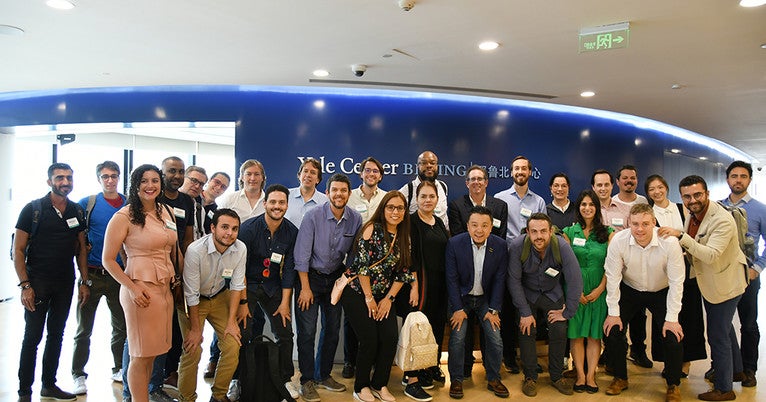 Twenty-five founders of fintech startups from around the world â€” including Colombia, Brazil, Italy, Kenya, Lebanon, Mexico, Nigeria, the U.K., and the U.S. â€” gathered at Yale Center Beijing on Sept. 17 for a wide-ranging discussion on the latest trends in fintech (short for â€œfinancial technologiesâ€�) and cryptocurrency.

This group of fintech entrepreneurs from around the globe were on a tour in China organized by Endeavor Global, co-founded by Linda Rottenberg â€™93 J.D., which supports the most promising, high-impact entrepreneurs in 30 countries and a number of underserved cities in the U.S.

Throughout the trip, the group connected with top fintech players in China, sharing trends and insights from their home markets and exploring potential business opportunities with their counterparts in China.

How do we use blockchain to promote the freedom of choice and bring financial access to people around the world?

In discussing Binance and cryptocurrency, Zhou emphasized what he called the freedom of money and â€œhow you store money, move money, value money.â€� Zhou continued, â€œHow do we use blockchain to promote the freedom of choice and bring financial access to people around the world?â€�

â€œThereâ€™s a lot of friction in fiat money,â€� said Zhou, referring to the difficulty in trading with traditional currency. â€œMoney is the most regulated industry in the world.â€�

Vogel agreed, explaining that â€œif you look at the history of money, the evolution of money, it has changed over time. And cryptocurrency is the next step.â€� He continued: â€œWhen you envision global money, things can change. When you travel, you wonâ€™t have to change currencies. It can be recognized around the world.â€�

Talking about the speculation and trendiness of cryptocurrency, Zhou noted that â€œanytime something new comes up, thereâ€™s going to be a boom and bust cycle, but that also attracts attention. You canâ€™t discount the speculators, because they bring risk-taking to the table, and risk-taking is important when thereâ€™s new technology because it brings capital. When thereâ€™s capital and risk and smart people, something amazing happens.â€�

Among the other entrepreneurs in attendance were Jay Alabraba, co-founder of Paga, the largest multichannel mobile money operator in Nigeria. Asked why he decided to join this trip to China, Alabraba said that China is leading the world in applying technology to everyday life and pointed to the level of adoption of technology in China as the most impressive thing he observed in the nation.

Noting the success and widespread use of mobile payment platforms like WeChat pay and Alipay in China, Alabraba cited â€œtrust and the ability to evolve along with the marketâ€� as key factors in Chinaâ€™s rapid adoption of new technology. â€œTechnology is just one piece of the picture. Itâ€™s really critical to have local knowledge to deliver services that actually target the customer directly,â€� Alabraba emphasized.

Vogel said he was also impressed with the level of technology usage in China. â€œChina is very difficult to understand because itâ€™s just so different than Mexico. But coming here, and seeing how advanced China is â€¦ the rest of the world is way behind.â€�

After visiting China and meeting with local fintech leaders, Vogel said he was even more optimistic about the future of cryptocurrency. â€œI think everything is going to become 100% digital. And I think the ability to transact with people globally will become significantly easier.â€�

Yale Center Beijing, Yaleâ€™s first university-wide center outside of the United States, is a convening space and intellectual hub that advances Yaleâ€™s mission to improve our world and develop leaders worldwide who serve all sectors of society. Founded in 2014, the center acts as an activity space for Yaleâ€™s collaborations in China, enables the university to expand existing activities and form new partnerships, supports research and study from each of the universityâ€™s schools and divisions, and serves as a gathering place for alumni from throughout Asia.