Long before we curated our recipes on Pinterest or posted photos of our plates to Instagram, we shared recipes by writing them out by hand. Many times, these well-worn pieces of paper found their way into recipe boxes or books, ready to be handed down to the next generation crumbs and all. 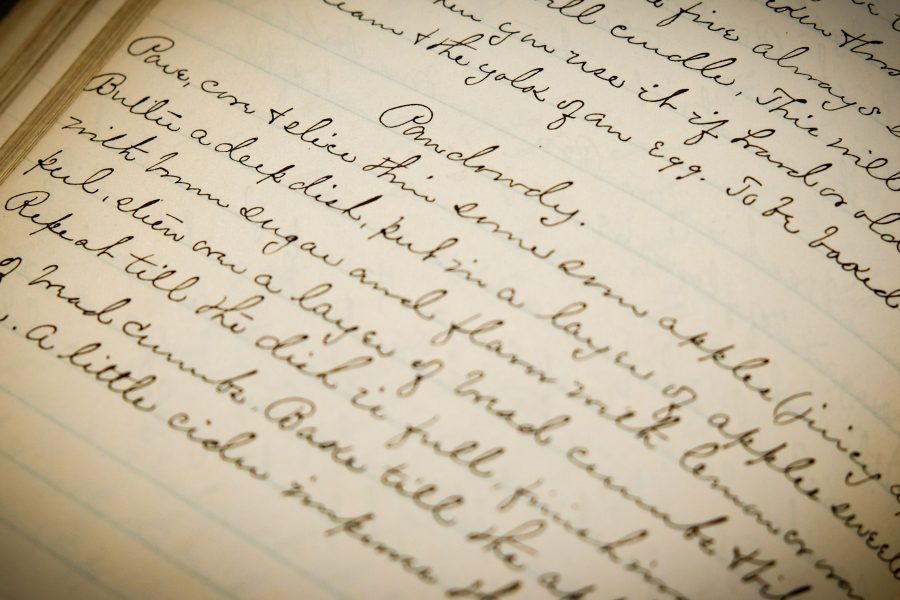 Apple Pandowdy recipe found in a recipe book from 1933 in the Illinois History and Lincoln Collections at the University of Illinois at Urbana-Champaign library.

Sometimes someone took the time to write out an entire collection of recipes. These handwritten treasures, called manuscript cookbooks, are a rare find, and one that invites us right into peopleâ€™s kitchens.

We found just such a manuscript cookbook tucked away in the Illinois History and Lincoln Collections on the third floor of the main library. This small, lined notebook has a green cloth cover with no other markings. Inside, the pages are surprisingly cleanâ€”no splatters of sauce or errant crumbs stuck in the binding. Each page is written in meticulous script, and an index reveals that this collection includes recipes from multiple contributors.

The care with which the recipes are written and the addition of the whimsical watercolor images that open each section suggest that perhaps this was a gift, maybe for a wedding or new home. We donâ€™t know many things about the origin of this collection. Weâ€™re left wondering: Where did the author live? How did it find its way into our library collection? Did the cookbook reach its intended home, and did some of the recipes end up serving a hungry family?

We do know that our library acquired the book in 1933. It was catalogued and shelved andâ€”eighty-five years laterâ€”we flipped through its pages.

Charmed by this collection of recipes, we wanted to bring one of the recipes, apple pandowdy, to life.

So, with the help of the faculty and students of Bevier CafÃ©, we set out to recreate it.

Apple pandowdy resembles an apple crumble or cobbler. The difference is in the dowdy. To dowdy means to press down on the crumb topping with the back of a spoon so that the juices from the simmering apples spill up and over the topping. When this is done partway through baking, it creates a caramelized crust.

There is one other unique aspect to our found recipeâ€”the use of stale bread instead of a traditional combination of butter, flour, and brown sugar for the topping. This ingredient is likely reflective of the Depression era during which this version of the recipe was created. Finding a way to use stale bread meant that nothing was wasted in the kitchen.

The challenge to recreate this apple pandowdy recipe was taken up enthusiastically by Jorden Brotherton (ACES â€™10), clinical assistant professor in hospitality management, and Carter Philips (ACES â€™01), quantity foods manager and instructional chef for the CafÃ©. Brotherton and Phillips run the class, â€œFood Production and Service,â€� considered a kind of boot camp for dietetics and hospitality management students. In the course, students learn how to run Bevier CafÃ©. They test recipes, scale them up to quantities that will feed a lunch crowd, purchase the ingredients, and cost out the items. They also take turns at the different stations in the kitchen prepping, cooking, and serving the food.

Brotherton and Phillips used the apple pandowdy recipe as an exercise for their class, walking them through the process of recreating this decades-old recipe without provided measurements, cooking times or temperatures, or even the vessel the pandowdy should be cooking in.

â€œWhoever wrote the recipe probably made a fantastic pandowdy. Thatâ€™s why itâ€™s in the book,â€� said Brotherton. â€œBut in order to replicate it or to make that recipe shareable, we had to figure out what quantities made sense.â€� 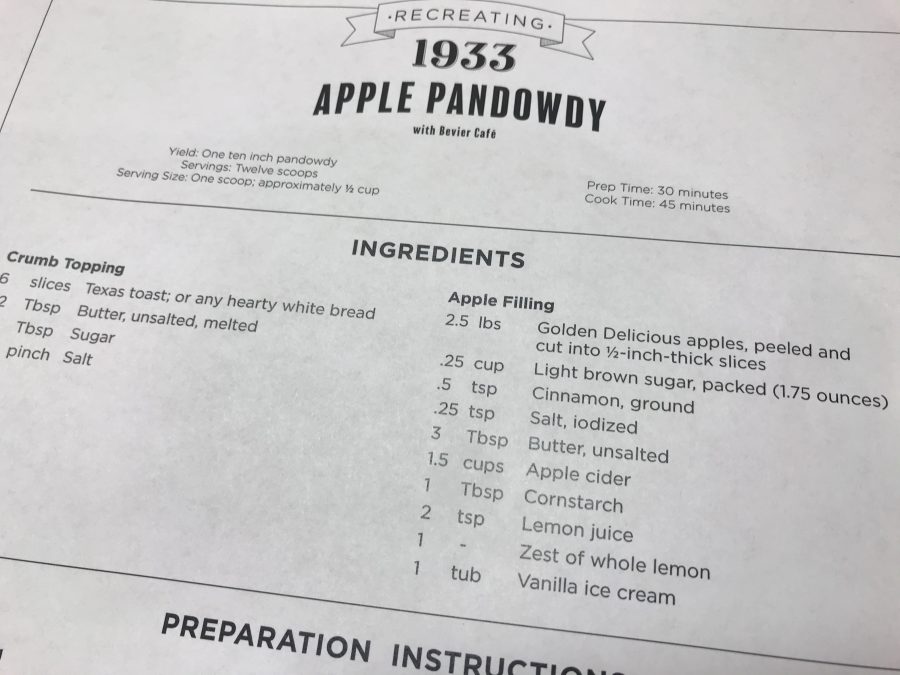 They started with modern versions of the recipe to test time and temperature, while also using cider, lemon zest, and bread crumbs included in the original recipe. Knowing only that the recipe used a â€œdeep dish,â€� Phillips decided to use a cast iron skillet, an item that provided the depth needed and was appropriate to the time period.

After eight tests (more cornstarch here, less cider there), Brotherton, Phillips, and the students felt they came up with the right balance of ingredients. Ultimately, they were able to offer the pandowdy in the CafÃ© during a busy lunch hour.

Thanks to their hard work, the team transformed this heirloom recipe from words on a page to a warm, comforting dessert. By capturing the spirit of the recipe, they celebrate not only the woman from whose kitchen it came, but food as a language, as a way of communicating love and honoring tradition. Now it is something to be enjoyed and savoredâ€”and shared.

Named for Isabel Bevier, an Illinois professor who revolutionized household science, Bevier CafÃ© has been operating as a student laboratory for over one hundred years. Bevier brought a scientific approach to the study of food preparation, nutrition, human development, and running a home.