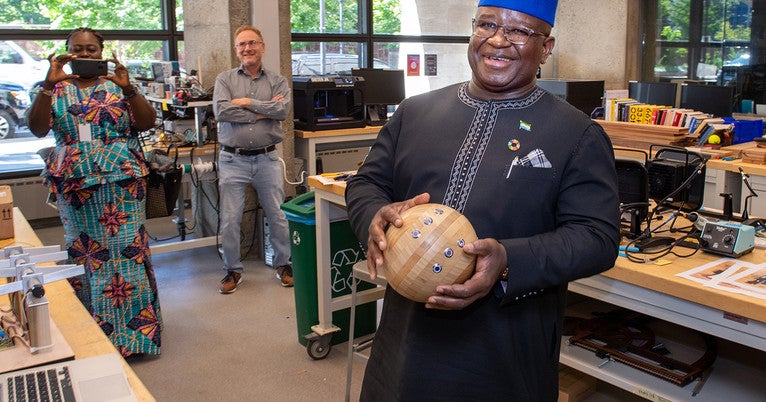 Yale Africa Initiativeâ€™s African Leaders Forum welcomed the president of Sierra Leone, Julius Maada Bio, for a panel discussion hosted by the Council on African Studies. On his Sept. 24 visit to the Yale campus, President Bio was accompanied by First Lady Fatima Maada Bio; Dr. David Moinina Sengeh, chief innovation officer in the Office of the President, and several members of his cabinet.

President Bio headlined a Yale African Leaders Forum panel titled â€œHuman Capital Development & Innovation: Pillars for Sierra Leoneâ€™s Transformation.â€� Upon its arrival, the presidential delegation met with President Peter Salovey, who reiterated his commitment to strengthening Yaleâ€™s ties to the continent through the Yale Africa Initiative, an effort he announced at his inauguration in 2013 with the aim of fostering new directions in research on Africa, identifying new partnerships with those on the continent, and strengthening Yaleâ€™s recruitment efforts, all while emphasizing teaching and learning. Bio and Salovey pledged to explore pathways for cooperation the areas of public health, preservation of cultural heritage, and technology.

Bio acknowledged the historic ties between New Haven and the Sierra Leone capital, Freetown, in his visit to City Hall for a special ceremony hosted by Mayor Toni Harp in his honor. Harp presented Bio with a key to the city to commemorate the â€œsister-cityâ€� relationship between the two cities and peoples. Stemming from the shared history surrounding the Amistad revolt, in which captives from Sierra Leone who led a revolt on board the Amistad in 1839 were brought to New Haven during their struggle to regain freedom, the sister-city relationship spans more than two decades. Following the ceremony at City Hall, Bio and the First Lady visited Grove Street Cemetery to lay a wreath at the cenotaph of the six freed Amistad captives who died and were buried in New Haven. In nearby Jean Pope Memorial Park, a tree was also dedicated to honor the Amistad captives and those who fought to secure their freedom, including Yale College alumni of the era.