FOTAD Dinner Theater to Perform Love, Loss, and What We Wore at SIUE - EduBlog.News

FOTAD Dinner Theater to Perform Love, Loss, and What We Wore at SIUE 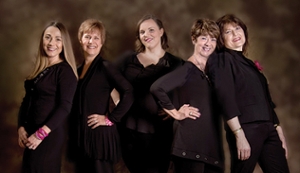 Southern Illinois University Edwardsvilleâ€™s Friends of Theater and Dance (FOTAD) will present its fall fund raiser â€œFOTAD Dinner Theaterâ€� on Saturday, Nov. 2. The evening will include a buffet dinner and special live performance at Fixinâ€™s Restaurant in SIUEâ€™s Morris University Center. Doors open at 6 p.m., with dinner served at 6:30 p.m. followed by the performance at 7:30 p.m.

Director Diana Enloe presents the hilarious theater performance of Love, Loss, and What We Wore. This play by Nora Ephron and Delia Ephron is based on the 1995 book of the same name by Ilene Beckerman. It is organized as a series of monologues and uses a rotating cast of five women, Carol Hodson, Christy Luster, Debbie Maneke, Dianna Pallas and Donna Wilson. Through a series of touching and humorous vignettes and monologues, the quintet shares its charactersâ€™ stories, exploring themes of relationships, oppression and sexuality, loss of loved ones, divorce, and the fullness of life through the metaphor of the charactersâ€™ love/hate relationship with clothes.

Love, Loss, and What We Wore was originally performed Off-Broadway at the Westside Theatre in New York City. The cast originally included Rosie O’Donnell and Tyne Daly. The show won the 2010 Drama Desk Award for Unique Theatrical Experience, as well as the 2010 Broadway.com Audience Award for Favorite New Off-Broadway Play.