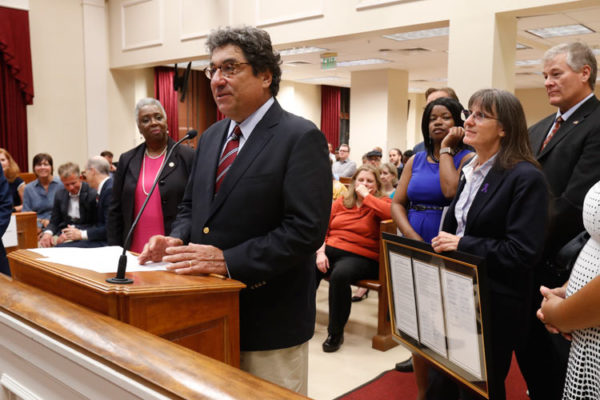 Chancellor Emeritus Nicholas S. Zeppos was honored by the Metro Council on Oct. 1 for his service to Vanderbilt and Nashville. (Wade Payne/Vanderbilt University)

The resolution commending Zeppos, introduced by At-Large Council Member Burkley Allen, acknowledged his â€œoutstanding leadership and many accomplishments as chancellor of Vanderbilt University.â€� The council acknowledged the numerous accomplishments achieved at the university under Zepposâ€™ leadership, including the launch of Opportunity Vanderbilt, the development of the FutureVU campus development framework, the reorganization of the university and Vanderbilt University Medical Center as separate entities, the universityâ€™s support of the Nashville community and the emergence of Vanderbilt as one of Americaâ€™s best research universities.

â€œWhen our city does well that means Vanderbilt thrives,â€� said Zeppos following the presentation of the resolution. â€œIf Vanderbilt can contribute to the equality, education and spirit of a healthy, loving community, that is a beautiful partnership.â€� 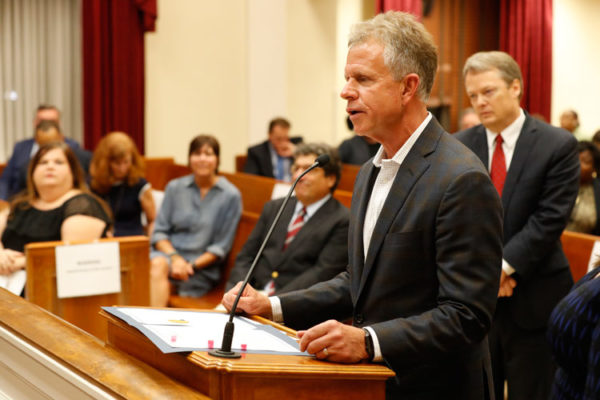 West Nashville Councilwoman Kathleen Murphy introduced the resolution in honor of Corbin and the VandyBoys, congratulating the coach and team on their historic 2019 season and College World Series championship. The resolution also acknowledged the entire coaching staff and 2019 Commodore baseball roster. Corbin accepted the resolution on behalf of the team.

â€œWe appreciate the honor to Vanderbilt University, the athletic department and our baseball program,â€� said Corbin. â€œVanderbilt has allowed our team to be an extension of the university and a part of Nashvilleâ€™s growth.â€�