The inaugural cohort of the Bass Military Scholars Program, comprising seven U.S. military veterans who are pursuing professional degrees across several of Vanderbilt Universityâ€™s schools, were honored at a reception in Alumni Hall on Sept. 19. Among those in attendance were Lee and Ramona Bass, whose foundation established the program with a $25 million gift in 2018; their son and alumnus Perry R. Bass II, BAâ€™10; and alumnus John S. Beasley II, BAâ€™52, JDâ€™54, a former U.S. Navy officer and longtime Vanderbilt administrator for whom one of the scholarships within the program is named. 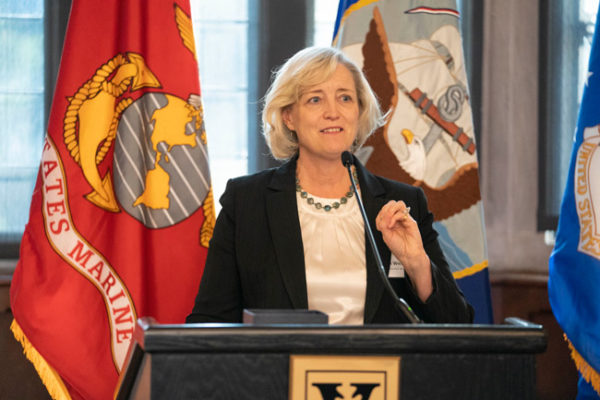 â€œHaving military veterans on campus helps expose our community to the character and values that can only be known by individuals whoâ€™ve served their country,â€� said Interim Chancellor and Provost Susan R. Wente during her opening remarks at the reception. â€œThis program, which is the result of the strong commitment and vision of Lee, Ramona and Perry Bass, establishes a path for us to build upon those values throughout our entire educational, discovery and learning environment.â€�

Lee Bass, an emeritus trustee of the Vanderbilt Board of Trust, spoke to the gathering about his admiration and gratitude for the scholars and echoed Wenteâ€™s sentiment about the benefits to Vanderbilt as a whole, saying that the community will â€œlearn and prosper and be inspired by their interaction with them.â€� Bass offered a uniquely Texan perspective on the seven scholarsâ€™ role as the first cohort.

â€œThe part of Texas I grew up in is known for its cattle drives, and thereâ€™s an expression there called â€˜riding point,â€™â€� he said. â€œIt refers to the cowboy who would lead the drive. He set the direction and the pace, and the success or failure of the drive was largely up to the decisions he made. As the first cadre, you scholars are riding point for us. Iâ€™m confident you will do a great job of setting a direction for the program.â€�

Retired Lt. Gen. Gary H. Cheek, director of the Bass Military Scholars Program, introduced the scholars and talked about their backgrounds, noting the individual strengths that make them ideal representatives of the program. He also presented each of them with specially designed Bass Military Scholar challenge coinsâ€”a tradition borrowed from the military that, he explained, dates back to the Roman Empire. 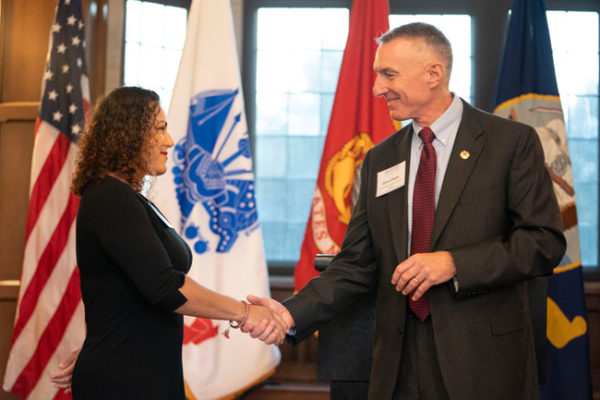 â€œWe use coins in three ways,â€� Cheek said. â€œOne, just like the Romans, to reward excellence and service. The second is to welcome new members to the team and bring them into the unit. And the third is to use those coins as a way of making ambassadors for the unit and building teams across units within the organization.â€� The scholars later handed out coins to others at the gathering, which included Vanderbilt administrators and faculty as well as members of the Middle Tennessee military community, in the spirit of strengthening bonds across the groups.

A highlight of the reception was the recognition of John Beasley for his military service and his years of commitment to Vanderbiltâ€”71 in all when counting Beasleyâ€™s time as an undergraduate and law student. In his introductory remarks Brett Sweet, vice chancellor for finance and chief financial officer, spoke to the significance of holding the reception in Alumni Hall. Not only was it the location of Beasleyâ€™s former office, it also has a special importance in Vanderbiltâ€™s shared history with the military.

â€œItâ€™s not an accident that this event is occurring in this room,â€� said Sweet, who is himself a former U.S. Navy officer. â€œIf you look at the fireplaces, youâ€™ll see the names of 44 individuals above them. This building was planned in 1919 to honor the 44 faculty, students and staff who perished in World War I. The Bass Scholars are joining a long history of supporting veterans here at Vanderbilt.â€� 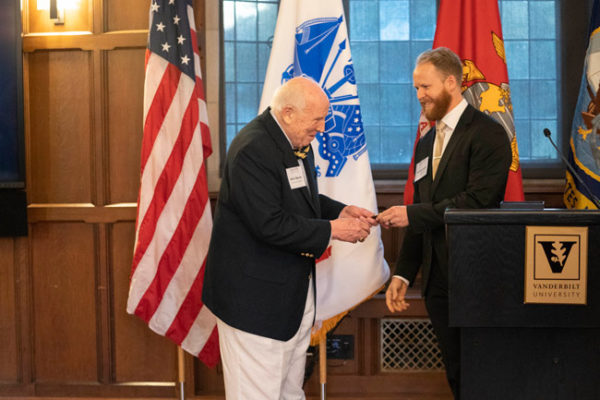 As part of the gift to establish the program, the Lee and Ramona Bass Foundation stipulated that one of the scholarships be named in honor of Beasley and be awarded to a Navy veteran each year. The initial recipient of the John S. Beasley II Scholarship is Matthew Smith, who graduated with honors from the University of Georgia in 2012 but delayed enrolling in medical school so that he could serve his country as a Navy SEAL. He is currently a student in the School of Medicine.

â€œAs these students begin their classes, not only do they bring the intelligence and the history of their service, but I think they infuse the rest of their classmates with the sense of joy that comes in serving other people and your country,â€� said Beasley before receiving a coin from Smith. â€œItâ€™s a privilege to serve your country.â€�

To learn more about the Bass Military Scholars Program, visit vu.edu/bass-scholars and read a Q&A with Gary Cheek.