Yinan Liang ’20 has always been fascinated by what makes people tick. Now she studies psychology and works in the Gutchess lab. 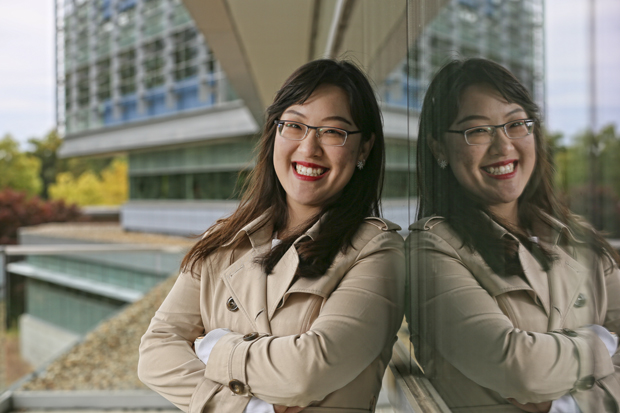 Even before she arrived at Brandeis from Beijing, Yinan Liang â€™20 knew she wanted to pursue a career in psychology: sheâ€™s always been fascinated by what makes people tick.

At Brandeis, sheâ€™s been able to channel this interest into research. Sheâ€™s worked in professor Angela Gutchessâ€™ laboratory studying the relationship between memories, depression and culture and currently serves as a research assistant at Brigham and Womenâ€™s Hospital in Boston. At Brigham and Womenâ€™s, she provides social and support and assists in translations for immigrant Chinese women who are receiving obstetric and gynecological care.

â€œI like that there are no correct answers for how every individual thinks and behaves,â€� Liang said. â€œPsychology is complicated â€“ like solving a puzzle.â€�

Liang is considering a career in clinical psychology or counseling, and also hopes to earn a PhD, conduct her own research, become a psychology professor and run a personal practice.

Along with majoring in psychology, Liang minors in theater arts at Brandeis. She arrived on campus as a first-year in the Gateway Scholars Program, an intensive, seven-week English language program for high-performing and talented international students.

At the time, Liang was nervous about leaving China despite her passion for psychology and her parentsâ€™ encouragement that she attend school in America.

â€œI was definitely nervous,â€� Liang said. â€œI am very family-oriented â€“ I love my mom and dad â€“ and most of my friends are still in China.â€�

Liang credits her friends at Brandeis and mentors like Gutchess and neuroscience professor Don Katz for encouraging her to open up to her new surroundings, particularly during office hours.

Shortly after she arrived as a first-year on campus, Liang attended a psychology research fair as well as a professor and student mixer, which was hosted by the academic advising department. Thatâ€™s where she met Gutchess, who immediately helped Liang identify a research focus and offered her a place in the laboratory.

Her love of theater helped, too.

Liang was part of her high schoolâ€™s theater club and had experience playwriting, acting, directing and set designing. That pushed her to pursue the theater arts minor, and to take her Brandeis friends to shows and musicals on Broadway or sing Karaoke in Boston.

She managed to shrink the distance between her and her family as well.

â€œI like sharing my experiences on campus with parents and friends back in China a lot,â€� Liang said. â€œIâ€™ll ring my family in China at least once a week. And I use WeChat to communicate with friends every day.â€�

Liang is proud of how far sheâ€™s come and wants to be an example for her peers back home.

â€œI definitely opened myself up more and was willing to reach for new opportunities,â€� she said. â€œWhen I was a first-year, because English isnâ€™t my first language, I considered myself not good at speaking it. But now I am a lot more confident. I see the benefit of having sought out opportunities here at Brandeis, and Iâ€™ve gained a lot from it.â€�