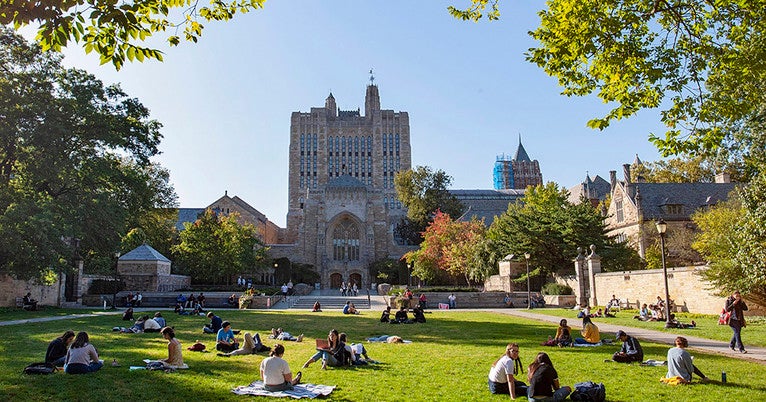 Yale President Peter Salovey, Provost Benjamin Polak, Dean of Yale College Marvin Chun, and Dean of Undergraduate Admissions and Financial Aid Jeremiah Quinlan announced a major expansion of Yaleâ€™s financial aid policies on Oct. 4. The changes will make a majority of American families with school-aged children eligible for a scholarship from Yale that will cover all standard billed expenses, including tuition and fees, on-campus housing, a full meal plan, and hospitalization insurance. The changes will make an additional 1.8 million U.S. families eligible for Yaleâ€™s most generous financial aid awards.

Since 2010, Yale has not required parents earning less than $65,000 annually â€” with typical assets â€” to make any contribution toward the cost of a childâ€™s education. The financial aid awards for these students are commonly referred to as â€œzero parent shareâ€� awards. Recently, Yale further enhanced these awards providing a $2,000 startup grant for a studentâ€™s first year and free hospitalization insurance coverage.

Beginning next year, Yale will raise the threshold for zero parent share awards to $75,000 in annual income, increasing the number of families eligible for Yaleâ€™s most generous financial aid award. The U.S. Census Bureau reports that $75,000 is above the median household income for families with children ages 6-17. Under the new policy, more than 15 million American families in this range would qualify for a zero parent share award from Yale. Remarking on the new policy, Salovey said, â€œEleven years ago, Yale removed parent contributions for lower-income families. And over the last six years, the university has continued to make significant investments in financial aid. More than ever before, we are welcoming excellent students from every walk of life and ensuring that they have opportunities to thrive once they are on campus. Today, we make Yale even more accessible. We underscore our commitment to educating the most promising students, from all socioeconomic backgrounds, who will make great contributions to our nation and to the world.â€�

More than ever before, we are welcoming excellent students from every walk of life and ensuring that they have opportunities to thrive once they are on campus.

Yale also announced a reduction in student effort for all students receiving zero parent share awards. The student effort is the amount all students are expected to contribute toward the total cost of their Yale education, including the billed expenses â€” like tuition and fees, a meal plan, and housing â€” and unbilled expenses such as travel expenses, course books, and laundry costs, which all students manage and pay on their own. Currently, Yaleâ€™s zero parent share awards include a student effort of $4,450 in the first year and $4,950 for subsequent years. The new policy reduces this to $3,700, consistent for all four years. This is equal to Yaleâ€™s annual estimates for a studentâ€™s books and personal expenses. As a result of the change, students and families with zero parent share awards can expect that their scholarship funds will cover the complete cost of Yale College tuition, on-campus housing, the meal plan, and hospitalization coverage. These students will still receive a $2,000 startup grant in their first year. The $1,250 reduction in student effort for upper-level students will replace the $600 supplemental grants that was previously included in zero parent share awards for sophomores, juniors, and seniors.

Director of Undergraduate Financial Aid Scott Wallace-Juedes said he is excited about the changes, not only because they provide greater support to Yale students, but also because they will help simplify the process of explaining Yaleâ€™s policies and commitment to affordability. â€œYaleâ€™s financial aid policies are remarkably generous, but just as a familyâ€™s finances can be complicated, so too can need-based aid awards. These new policies send two messages loud and clear: Yale doesnâ€™t expect parents earning incomes below the national median to contribute towards the cost of their childâ€™s education, and students from those households will only need to cover their own out-of-pocket expenses â€” not any portion of the expenses typically billed by Yale.â€�  Wallace-Juedes explained that all students will still have multiple options for covering their own expenses, including funds from on-campus and summer jobs, savings, and outside scholarships.

The changes will go into effect in the 2020-2021 academic year and will apply to incoming first-year students and returning students. Returning students with zero parent share awards will see a reduction in their student effort from the previous year. Student effort levels for all other students receiving financial aid will remain frozen at levels set in 2015.

See the chart below for an overview of Yaleâ€™s commitments to affordability over the past decade.

Quinlan highlighted the rapid growth in the number of students from lower-income backgrounds in Yale College. â€œFor the second year in a row, 20% of students in the incoming first-year class qualify for federal Pell Grants. There are more than 1,000 Pell Grant recipients enrolled in Yale Collegeâ€”nearly 300 more than were enrolled just three years ago,â€� said Quinlan. He explained that from the time he became Dean in 2013, the combination of the increase in the size of the undergraduate student body and increasing representation of Pell-eligible students has translated into a near doubling of the size of this cohort within the first-year class. â€œThe diversity of the Yale student body is an essential component of our educational mission, and I am proud of Yaleâ€™s commitment to remaining accessible and affordable to students of all backgrounds.â€�

To encourage high-achieving students from lower-income backgrounds to consider Yale, the Office of Undergraduate Admissions has created several new initiatives in recent years. Director of Outreach and Communications Mark Dunn highlighted a targeted affordability mail campaign that has now reached more than 150,000 high school students over five years. Dunn also oversees the Yale Ambassadors program, which enlists nearly 300 Yale College students annually to visit upwards of 800 high schools across the United States. Yale also partners with several national organizations including QuestBridge, the American Talent Initiative, and Matriculate to amplify the message and promote accessibility across all selective colleges and universities. â€œThere is a persistent misperception that colleges like Yale are financially out of reach for lower- and middle-income families,â€� said Dunn. â€œOur financial aid policies ensure that a Yale education is truly affordable for everyone. My top priority is spreading that good news to the students and families who benefit the most from hearing it.â€�

Yale does not require students or their parents to take out loans, and 86% of recent graduates left Yale with no student debt. More than 64% of undergraduates receive some form of financial assistance, and the average Yale Scholarship last year was more than $52,000. For the more than 50% of students who received a need-based Scholarship from Yale, the median net price paid for tuition, housing, meals, books, and personal expenses was only $11,200. Kiplinger recently named Yale the #1 best value among private universities. Prospective students can estimate their cost to attend Yale in less than three minutes with the online MyinTuition quick cost estimator.