Donald Trump calls impeachment a coup. It's not. - EduBlog.News

Donald Trump calls impeachment a coup. It's not. 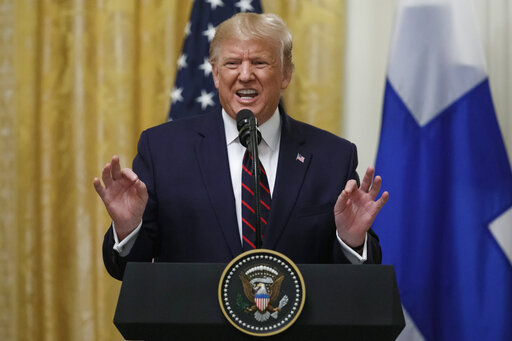 As the pressures of impeachment have risen, President Donald Trump has increasingly used the word “coup.”

On Oct. 1, Trump tweeted, “As I learn more and more each day, I am coming to the conclusion that what is taking place is not an impeachment, it is a COUP, intended to take away the Power of the……..People, their VOTE, their Freedoms, their Second Amendment, Religion, Military, Border Wall, and their God-given rights as a Citizen of The United States of America!”

As I learn more and more each day, I am coming to the conclusion that what is taking place is not an impeachment, it is a COUP, intended to take away the Power of the….

It was not the first time Trump has used the word “coup” â€” which is shorthand for “coup dâ€™etat,” a French term that means overthrow of the government.

But the House of Representativesâ€™ move to open a formal impeachment inquiry seems to have supercharged Trumpâ€™s use of the “coup” language. On Oct. 2, Trumpâ€™s campaign unveiled a new ad that says, “Itâ€™s nothing short of a coup, and it must be stopped.”

On a literal level, Trump is misusing the word. What is happening now is not a coup.

What is a coup?

The defining element of a coup is that it is carried out beyond the bounds of legality.

“We define a coup d’Ã©tat as the sudden and irregular (i.e., illegal or extra-legal) removal, or displacement, of the executive authority of an independent government,” wrote the Coup Dâ€™etat Project at the University of Illinoisâ€™ Cline Center for Democracy in 2013.

Violence is part of many coups, but being violent is not a necessary condition.

Of the 12 types of coups recognized by the Cline Center, nine do not seem to have anything to do with what Trump is talking about, including military coups, rebel coups, popular revolts, dissident actions, palace coups, foreign coups, internationally mediated transitions, forced resignations, and self-coups, in which the leader strong-arms other branches of government to entrench power.

Two other types cited by the center are defined by how far they got â€” attempted coups (which try and fail) and coup conspiracies (which never get to the stage of being carried out). Any supposed coup against Trump would have been a coup attempt, since heâ€™s still in office. But that doesnâ€™t mean there actually was a coup attempt.

The Trump camp defended the presidentâ€™s comments by saying that dictionary definitions allow usages that are more informal than the ones used by academics such as the Cline Center. Merriam-Webster, for instance, says the word can mean “a sudden decisive exercise of force in politics.”

The Trump camp pointed to widespread examples of Democratic lawmakers using “coup” to describe the 1998 impeachment of President Bill Clinton, and to media reports using the word to characterize a 2009 change in leadership in the New York state legislature.

Is impeachment equivalent to a coup?

Legal scholars, however, say itâ€™s important for a prominent political figure like Trump to use words as strong as “coup” with care.

They noted that there is nothing beyond the bounds of legality about the impeachment process. Impeachment is explicitly described in the Constitution as the way to remove a president who has committed “high crimes and misdemeanors.”

You canâ€™t get much more within the bounds of legality than to be an explicit power outlined in the Constitution, said Michael Klarman, a Harvard Law School professor.

“Itâ€™s obviously not a coup for the House to launch impeachment proceedings,” Klarman said.

“What is going on today in the United States is a constitutionally sanctioned process that is an integral part of the checks and balances that have been vital to the longevity and success of the U.S. Constitution and the Republic it created,” he told PolitiFact.

Of the Cline Centerâ€™s categories, Trump would presumably be referring to a “counter coup,” which is defined as involving “the elimination of a usurper by members of the prior regime within a month of the initial coup.”

But in Trumpâ€™s case, he didnâ€™t take office through a coup (he was duly elected by the Electoral College) and if he is removed from office, his duly elected vice president, Mike Pence, would take over. So calling it a counter coup is problematic, too.