Yale and other universities file amicus brief in support of DACA - EduBlog.News

Yale and other universities file amicus brief in support of DACA 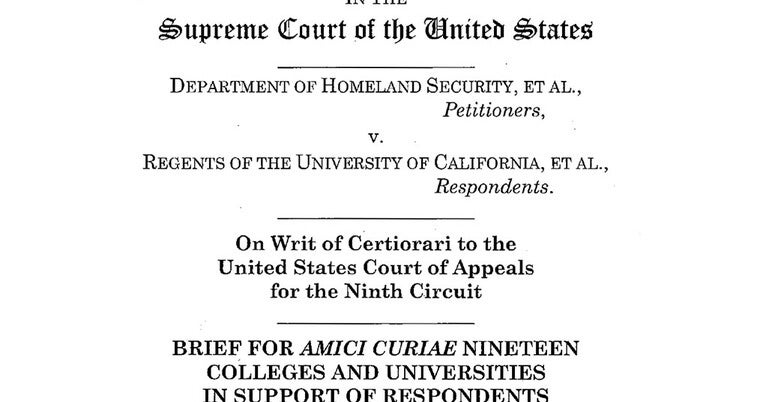 Yale joined 18 colleges and universities in filing an amicus (friend of the court) brief in the Supreme Court Oct. 4 in an ongoing case addressing the Trump administrationâ€™s decision to rescind the Deferred Action for Childhood Arrivals (DACA) program. DACA protects against near-term deportation for covered students, allowing them to work lawfully and travel abroad.

The brief was filed in support of the respondents in the case, which include the Regents of the University of California and the National Association for the Advancement of Colored People, among others. In 2017, the Trump administration announced its plan to phase out the DACA program, but several U.S. courts have halted the action.

In their brief, Yale and the other schools note that discontinuing DACA would â€œpreclude the remarkable students enrolled at amici institutions [the schools filing the brief] from obtaining the full benefit of their time on our campusesâ€� and would â€œundermine [the schoolsâ€™] educational missions by threatening their ability to attract and educate the most talented young people.â€�

The brief states that the amici institutions are united in their mission to educate â€œextraordinary students from diverse backgrounds and prepare them for leadership, active citizenship, and achievement in every field of human endeavor.â€�  It continues: â€œThe DACA students at amici institutions were selected because they are outstanding students. Like their classmates, these young people were valedictorians, student government leaders, varsity athletes, inventors, academic award winners, accomplished artists, and role models for younger children in their communities. And like many of their classmates, they are the pride of the neighborhoods in which they grew upâ€¦.â€�

The brief shares some of academic and other accomplishments of students at the various amici institutions and notes, â€œDACA studentsâ€™ presence on amiciâ€™s campuses is all the more notable given the enormous challenges that undocumented youth face in order to obtain higher education.â€� It also highlights some of the challenges faced by the students, many of whom come from families living below the federal poverty level and are the first in their families to attend college.

Among the DACA students quoted in the brief is one from Yale who explained, â€œ[The] challenges â€¦ start in high school â€¦ when many undocumented students, seeing no way out of their limbo status, lose motivation. Others pick up jobs on the side to financially help their families, slowly drifting away from their classwork. Even for those who remain dedicated to their classes, studies show a lack of information regarding university options and an inability to obtain financial aid obstructs the path to higher education.â€�

â€œDACA students are American in everything except immigration status,â€� the amicus brief states, later adding, â€œWhile DACA does not provide our students and alumni a path to citizenship, it does offer them a measure of security and access to opportunities for educational and professional development.â€�

Ending the DACA program, the brief states, â€œwould send a clear message to the more than one million undocumented children in the United States that the trails amiciâ€™s students and alumni have blazed lead nowhere and are not worth following. That message is antithetical to the commitment to equal opportunity on which this country was foundedâ€¦.â€�

Furthermore, the brief argues, rescinding DACA would deprive American society of â€œinvaluable resourcesâ€� â€” the contributions that these undocumented students can make while in school and after graduation.

â€œThe DACA students at amici institutions â€” and the many thousands more at other colleges and universities â€” are by definition the product of this nationâ€™s educational system and the communities that support it. Through the opportunities provided by this country, including amiciâ€™s â€” these young people now have the skills to give back â€” in ways big and small â€” to the country that raised them. And they want nothing more than the opportunity to do so.â€�

Two years ago, Yale President Peter Salovey wrote a letter to President Donald Trump urging him to maintain the DACA program, and in 2018 Yale joined with 18 other schools to file an amicus brief in U.S. District Court against a legal challenge to the program brought by Texas and six other states.