Scholarships empower optometry student to give back, work toward dreams - EduBlog.News

Scholarships empower optometry student to give back, work toward dreams 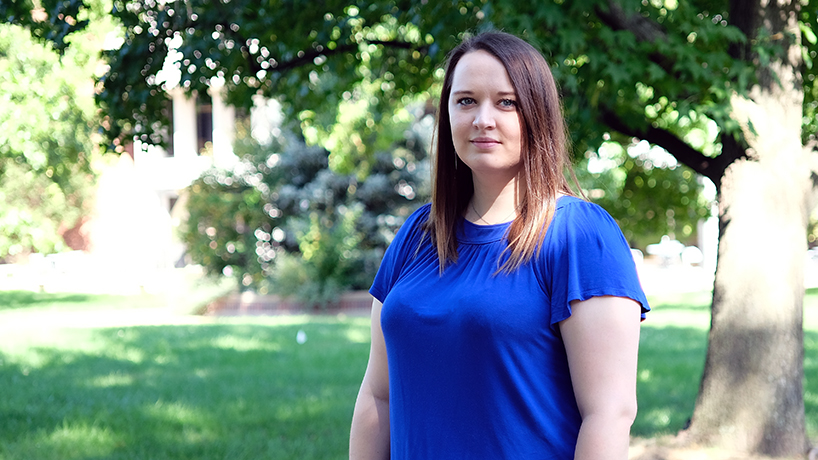 Fourth year optometry student Krystal Matson received the Dr. Larry J. Alexander Scholarship in recognition of her service to others and the profession. (Photo by Jessica Rogen)

Even for a high-achieving student such as Krystal Matson, the amount of information in optometry school required a bit of an adjustment.

Sheâ€™d gone from taking a full load â€“ 15 to 18 credit hours â€“ at the University of Central Missouri to 20 or 21, and the amount of information her undergraduate professors covered in a month now fit into one lecture at the University of Missouriâ€“St. Louis College of Optometry.

She needed to learn how to adapt â€“ fast.

â€œI ate, breathed and slept optometry,â€� Matson said. â€œI did not do anything fun. I missed a lot of family events. I went to class, took notes, paid attention, came home, studied everything we learned that day and reviewed things from the day before. I studied constantly. Even at meals, Iâ€™d have my iPad in front of me.â€�

Her hard work paid off, and Matson acclimated, especially after second year, which for many is the most difficult year of optometry school. Soon, she had time to resume her passion for service, and before long, she was doing volunteer vision screenings, serving as an admissions ambassador, working in Student Services and getting involved with the legislative side of optometric service with the Missouri Optometric Association and the student chapters of American Academy of Optometry and the American Optometric Association.

In recognition of Matsonâ€™s contributions to the profession and her academic achievement, the Optometry Cares American Optometric Association Foundation awarded Matson its Dr. Larry J. Alexander Scholarship for the 2019 academic year. The $2,500 grant recognizes a student that exemplifies Alexanderâ€™s belief in giving back and helping others. 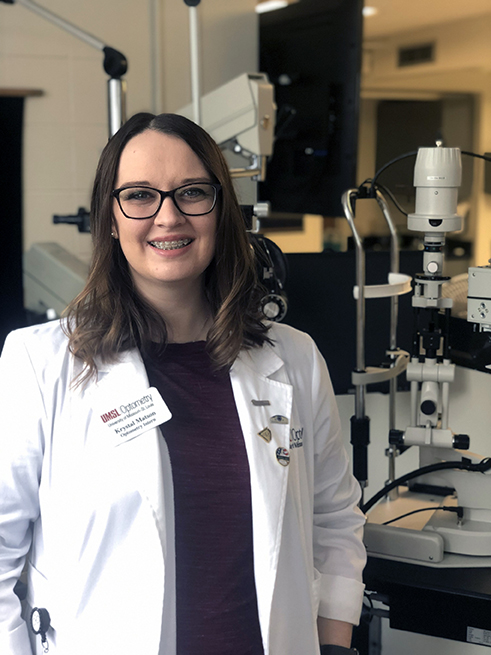 Matson, who came to UMSL with 1,200 undergraduate volunteer hours, embodies the spirit of the scholarshipâ€™s namesake.

â€œVolunteering started early for me,â€� Matson said. â€œI grew up in a household that was pretty dedicated to public service. My dad being a public servant, law enforcement, it was about serving others and doing what you can to help other people.

â€œItâ€™s really humbling for me to look back. Iâ€™ve been incredibly blessed in my life to be where I am. Things have gone right for me. Thatâ€™s not always true for other people, and seeing situations where if people are able to get that little bit of help, you never know what theyâ€™re capable of.â€�

Matson felt surprised and grateful to receive the AOA scholarship as well as another from the MOA Auxiliary worth $4,000, which she received last October at the organizationâ€™s awards luncheon.

But all this might not have come to be. Through Matson always had an interest in medicine growing up, she started undergraduate with a focus on teeth, not eyes.

â€œI thought I was going into dentistry, but everybody hates the dentist,â€� she said. â€œAnd you canâ€™t talk to your patients very much because your hands are in the mouth.â€�

A dentist Matson was shadowing suggested she look into other health sciences and before long, Matson found herself intrigued by optometry. Not only did she appreciated the professionâ€™s work-life balance, the ability to bond with patients and the challenges of patients who were each a little different from the next, but Matson was drawn by the prospect of using her other undergraduate major â€“ business â€“ to manage a private practice.

Though UMSL was one of three top-choice optometry schools for Matson, the College of Optometryâ€™s tight-knit atmosphere and proximity to her family sealed the deal. She still fondly recalls receiving her acceptance letter. Sheâ€™d done an interview double-header â€“ Houston and then St. Louis â€“ and was on the drive home.

Her choice has been rewarded. Now a fourth-year student, Matson has found an unexpected passion for ocular disease. That encompasses everything from how diabetes affects the eyes to glaucoma to retinopathy of prematurity, which is a condition sometimes seen in premature babies.

After her expected graduation in May, she hopes to eventually use that interest in a general private practice, hopefully in a rural or small town in the vicinity of Kansas City, Missouri.

But until then sheâ€™ll be studying for the second and third rounds of the National Boards of Examiners in Optometry and classes â€“ all while reflecting on her time at UMSL academically and socially.

â€œI think the culture at UMSL is phenomenal,â€� Matson said. â€œI think our faculty right now is second to none, and the administration is great as well. But my classmates: I would not have survived without some of my classmates. You really have to depend on people, whether itâ€™s a class project or sharing notes or just â€˜Hey, I donâ€™t understand this, and I need a little bit of help.â€™ My experience has been so rewarding.â€�