When he was in high school in the late 1990s, Theodore Kim liked art and he liked computers, but wasnâ€™t sure how to connect the two interests. Then he saw the first â€œToy Storyâ€� movie – one of the earliest films to feature computer animation – and it clicked. 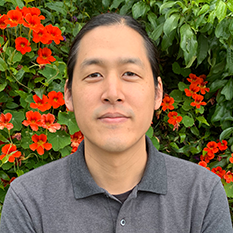 â€œIt wasnâ€™t even a thing before that,â€� said Kim, associate professor of computer science. â€œI thought that you couldnâ€™t combine art and engineering in some interesting way, but now it was like â€˜Oh, actually you can!â€™â€�

A couple decades later, â€œToy Story 4â€� is out this week on DVD, and itâ€™s one of the many movies that feature the work of Kim. In this case, it includes an innovation of his that gives life to the pull string that provides Woody (the cowboy voiced by Tom Hanks) his catchphrases. For the first three Toy Story movies, it took a lot of arduous work to get the string to move in a way that looked realistically, and even then, it could look a little too stretchy or awkward at times. Strings have whatâ€™s known as anisotropic properties – that is, they contain fibers with varying degrees of resistance. Itâ€™s what makes things like breaking wood or plants swaying in the wind tricky to animate.

â€œUsually, the artist has to go in and sculpt everything by hand, so they have to intuit what the physics is supposed to be, and then animate it by hand,â€� said Kim, formerly a senior research scientist at PixarResearch, who joined the Computer Science department this summer. â€œThis time around, we figured out the physics of the fibers so that animators can use a simulator to see how it should behave.â€�

Part of the work involved creating a simulation of a rope with nearly 19,000 degrees of freedom. Simulations of stiff fibers were factored in â€œso it squishes in one direction but is stiff in the other.â€� The work involves high-level mathematics, physics and computer science. In the movie, the effect is only about a second long each time it appears, but it adds a valuable touch that manages to be both realistic and whimsical. Kim and his colleagues detailed their work in a recent paper (with the decidedly less whimsical title â€œAnisotropic Elasticity for Inversion-Safety and Element Rehabilitationâ€�) in ACM Transactions on Graphics. The paper highlights the fact that math is everywhere – itâ€™s in how cloth stretches, how muscles flex and in the stretching of octopus tentacles.

Itâ€™s not the first time that Kim has broken new ground in the field. In 2009, he won an Academy Award for devising a better way to depict smoke and fire. Itâ€™s been used in â€œAvatar,â€� â€œThe Amazing Spider-Manâ€� and a lot of other movies. Before, it would take animators weeks to create realistic explosions and house fires, but with Kimâ€™s technology, known as Wavelet Turbulence, it can be done in hours. More than 10 years later (a very long time in the fast-changing world of computer animation), Kim still sees it occasionally in new films. And its usefulness goes well beyond Hollywood: Medical researchers can apply it to studying the turbulence of blood flow, for instance, or it can help the aerospace industry better understand air turbulence in their design of airplanes.

In fact, thereâ€™s a decent chance that if a movie effect catches your eye, it started out as a series of dense equations that fill the whiteboard in Kimâ€™s office. His work has led to new ways to create such phenomena as water boiling and the formation of ice. Even lightning bolts – one of cinemaâ€™s oldest and most popular go-to effects – gets an upgrade, courtesy of Kimâ€™s work. Some of these techniques are covered in the course heâ€™s teaching this semester, Physics Simulation for Movies, Games, and Fabrication. Others will be covered in his course next semester, Introduction to Computer Graphics. 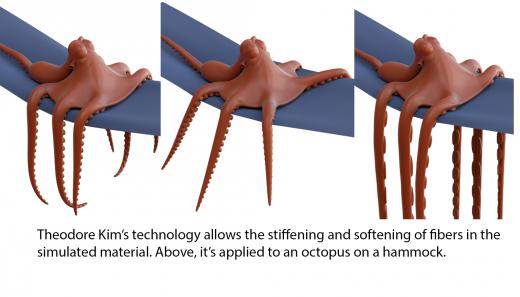 A lot of what Kim does is similar to what mechanical engineers do: identify certain physical movements or phenomena, and then write out a series of equations that represent those movements. In his case, though, itâ€™s usually a lot more exaggerated than what happens in real life. For instance, while a ball might deform by 10% from its normal shape in the real world, in the animated world it will routinely change its shape by 300%.

â€œYou can use the stuff that people use for normal mechanical engineering, but then it doesnâ€™t quite fit into the movie-making mold, so you have to create a new version of it,â€� he said.

He likes working in both academia and the film industry for their own reasons.

â€œIn the movie industry, they have some very concrete problems that need to be addressed, but the research timelines are around two weeks to a month,â€� he said.

At a university, though, he can work on problems that interest him, with a lot more time to figure them out. In both cases, itâ€™s a matter of finding better ways to capture the physical world on screen. â€œThereâ€™s something very satisfying when I do technical stuff and when I do art stuff and I can merge them together somehow,â€� he said.