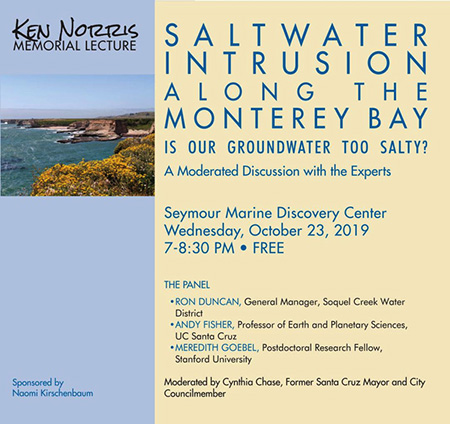 An expert panel will provide a perspective on saltwater intrusion during the annual Ken Norris Memorial Lecture at the Seymour Marine Discovery Center on Wednesday, October 23, from 7 to 8:30 p.m. Doors open at 6 p.m. for this free public event.

Saltwater intrusion is a pressing problem along the Monterey Bay coastline. For years, groundwater levels in the region have been dropping to record-level lows at such a rate that the aquifers are no longer being naturally replenished by rainfall. As groundwater levels fall, salty ocean water infiltrates inland. When the aquifers become contaminated with seawater, wells become too salty and unusable.

Saltwater intrusion is potentially irreversible and can result in costly changes for users of groundwater. What does this mean for the future? The Seymour Center will host a lively and informative panel discussion to reveal the complexities of saltwater intrusion and explore viable solutions.

Moderating the discussion will be Cynthia Chase, former Santa Cruz Mayor and City Councilmember. The panelists will include:

The Ken Norris Memorial Lecture is named after acclaimed scientist, naturalist, teacher, and conservationist Kenneth S. Norris. Norris was a professor of natural history at UC Santa Cruz for 18 years. His legacy includes helping to found UC Santa Cruzâ€™s Long Marine Laboratory and the campus’s Institute of Marine Sciences. Known for his pioneering research with dolphins and his efforts to establish the University of Californiaâ€™s Natural Reserve System, he was a key author of the federal Marine Mammal Protection Act of 1972. The lecture is sponsored by Naomi Kirschenbaum.