Electrum, the University of Michigan Solar Car Teamâ€™s car that will be competing in the upcoming 2019 World Solar Challenge this fall. Image credit: Joseph Xu/Michigan Engineering

ANN ARBORâ€”In a slender, bullet-shaped car, the University of Michigan Solar Car team will soon race down the Australian outback in the Bridgestone World Solar Challenge. The team is counting on its new battery system and solar cells to propel it to a first-place finish.

The multiday, 1,800-mile competition starts at 8:30 a.m. Sunday, Oct. 13, in Darwin in Australiaâ€™s Northern Territory. Thatâ€™s 7 p.m. ET Saturday, Oct. 12, in the U.S. The team will drive against more than 40 cars from around the world as they travel to Adelaide, South Australia.

â€œThis close to the race there really isnâ€™t an emotion you donâ€™t feel,â€� said Juliette Shaheen, a computer science undergrad and the teamâ€™s weather strategist. â€œWe built this car. And weâ€™re about to race it through the Australian Outback, so it really doesnâ€™t get much better than that.â€�

This yearâ€™s vehicle, Electrum, might look like the one that raced at the last world challenge, but under the hood are significant changes. In a complete electrical system overhaul, the team ditched traditional lithium ion batteries and switched to lithium polymer cells. Theyâ€™re seeing double-digit boosts to power efficiency, while cutting down weight per cell. This is crucial because race rules dictate the total weight of batteries on board. The team expects its competition to still be using lithium ion. 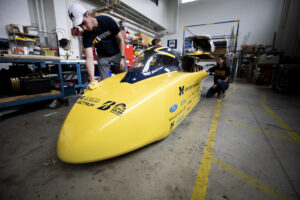 The new batteries were first scoped out by Daniel Kohler, a computer science senior and the teamâ€™s high voltage lead, when he joined in winter 2018. At the time, he was blown away by their specs.

â€œWhen I ran the numbers during research, the new batteries came up with double-digit efficiency improvements over what we had been using. When I told the team originally, they couldnâ€™t believe it,â€� Kohler said.

They ordered some samples for testing and turned to Jason Siegel, an assistant research scientist in mechanical engineering at U-M who specializes in lithium batteries. With Siegelâ€™s mentorship, the team put the new batteries through the paces. To Kohlerâ€™s surprise, the numbers were legit. The students had found their most innovative addition to Electrum.

â€œThe team has done a good job of characterizing the cells and usage pattern over the race to design a pack with minimum weight that will safely operate over the race parameters,â€� Siegel said. â€œIt was fun to work with such an energetic and committed team of students.â€�

With the electrical system overhaul and tuned-up aerodynamics, the team members believe theyâ€™ll be able to go faster than ever at the Bridgestone World Solar Challenge, beating their 2017 second-place finishâ€”a best-ever result for U-M.

The race ends in Adelaide, South Australia. While itâ€™s officially over Oct. 20, the U-M team typically finishes in four or five days. For live updates from the Bridgestone World Solar Challenge, follow @UMSolarCarTeam and @WorldSolarChlg on Twitter and @UMSolarCarTeam on Instagram. 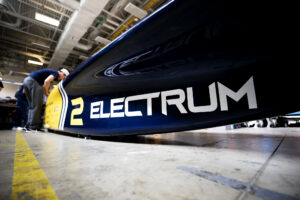 Electrum is the 15th car made by Michigan Solar since being founded in 1989. The team has won the American Solar Challenge nine times, had podium finishes in the Bridgestone World Solar Challenge six times, and won its first international championship in 2015 at the Abu Dhabi Solar Challenge. With more than 100 students from schools and colleges across the university, itâ€™s one of the largest student organizations on campus.

â€œGiven the long hours weâ€™ve been pulling to make a competitive, top-tier solar car, and considering the fact thatâ€”unlike many other top teamsâ€”weâ€™re all undergraduates that were taking classes through the start of the summer, Iâ€™m impressed that our character and strong work ethic can bring us all together when this should be, by all rights, an extremely tenuous relationship,â€� said Ian Stewart, an electrical engineering sophomore who serves as the race microsystems engineer.

â€œAll of us feel the stress of competing on the world stage, but weâ€™re using it to band together.â€�