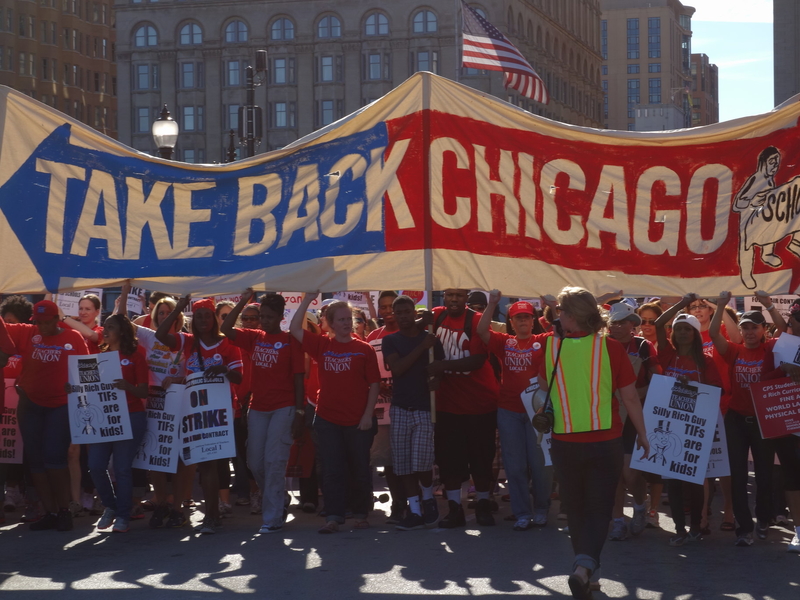 Asked what it will take to avoid a threatened strike next week, leaders of the Chicago Teachers Union have repeatedly used the same phrase of late: â€œPut it in writing.â€� That language is a tell: It signals whatâ€™s really at issue as the city heads toward what could be a brutal war of attrition that makes or breaks the start of Mayor Lori Lightfootâ€™s tenure.

Whatâ€™s at stake really isn’t money, at least in the form of pay hikes. The outcome of the standoff will determine who will have the power over Chicago Public Schoolsâ€”who will control and set priorities for a system that educates more than 361,000 students and employs 37,375 people. This confrontation, whether it leads to a strike or not, pivots on both sides’ willingness to change the nature of the relationship between City Hall and one of its major labor unions.

Lightfoot wants the power to remain where it has resided for decades, with the mayoral-controlled Chicago Board of Education. In particular, she wants to retain a 1995 state law that gives her the option of not bargaining over matters such as class size and the availability of school support staff such as nurses, librarians and social workers.

The CTU, meanwhile, wants a rewrite. The administration’s offer of a 16 percent pay raise over five yearsâ€”one that will lift average teacher pay to the $100,000 range by the end of the contractâ€”and its concessions on union priorities like support-staff spending have done little to mollify the teachers’ rank and file, 94 percent of which voted to authorize a walkout if leadership doesn’t get what it wants. Sensing that the time has arrived in which it can regain some lost stature, the union seeks to effectively ax that 1995 law by including binding guarantees about staffing in its new contract and presumably others to come.

Though a negotiated settlement still is possible before the Oct. 17 strike date, both sides increasingly are clear about whatâ€™s going on. Theyâ€™re also quite aware of the stakes.

With other unions representing CPS support staff and Chicago Park District workers threatening to also hit the picket line next week, Lightfoot faces a mass walkout like no mayor has witnessed in perhaps half a century, says University of Illinois at Chicago professor Bob Bruno, author of an award-winning book on the brief 2012 teachersâ€™ strike. â€œShe needs to demonstrate to the community that sheâ€™s in controlâ€� of an often chaotic city, he says.

CTU’s demands stem from and in some ways sparked a wider, national sociopolitical movement in which the progressive left is flexing its muscle behind people like presidential hopeful Bernie Sanders, who personally led a CTU rally here just a few days ago.

â€œOur resistance in 2012 (to then-Mayor Rahm Emanuel) helped to ignite the national #RedForEd movement and reset the terms of the debate over public education grounded in equity, educational justice and working and learning conditions,â€� CTU President Jesse Sharkey says in an email. â€œOur goal is to win the schools Chicago students deserve, nothing less.â€�

Team Lightfoot says it wants good schools, too, and is willing to give CTU much of what it wants with staffingâ€”but not in terms that would overturn the law, not when it has to come up with the money to pay the eventual bills. The administration is keenly aware that, having just regained some financial stability after a near effective bankruptcy two years ago, CPS needs to keep a tight rein on its checkbook.

The 1995 law at the center of the current dispute was enacted by Springfield Republicans who handed power to then-Mayor Richard M. Daley, in part as a reason to tell the city to solve its own problems. Much to their surprise, Daley not only seized but embraced the opportunity to take direct control of CPS.

From the perspective of his team, it worked.

â€œThe objective was to give the schools the flexibility to allocate their resources,â€� says Paul Vallas, who was CPS boss from 1995 to 2001, and then left town before returning to run for mayor last winter. In fact, Vallas contends, the 1995 law was a major reason why CPS stabilized its operation, grew its enrollment, boosted its cash reserves and won 12 bond-rating upgrades during his tenure.

Daley successor Emanuel not only grabbed onto that new power but sought to expand it, pushing through in very blunt ways things such as a longer school day and controversial school closures. None of those changes sat well with CTU.

â€œA strike wouldnâ€™t be about money,â€� concedes one top labor insider. â€œItâ€™s 24 years of frustration, compounded by Rahm.â€�  The irony, he adds, is that Lightfoot seems willing to give the union much of what it wants, but not in contractual form. Perhaps they can agree on a side letter, a memorandum of understanding, that source suggests.

National education labor experts say whatâ€™s occurring here is very much part of a coast-to-coast phenomenon, as school workers have taken to the streets in political settings as diverse as Oklahoma, West Virginia and Arizona.

Alex Caputo-Pearl, president of the United Teachers of Los Angeles, says CTUâ€™s brief strike here in 2012 was an inspiration to his union in its recent seven-day strike for not only pay hikes but staffing and limits on class sizes. Now some hope UTLA will set a return pattern for Chicago, where the union is â€œfocusing on a broader program, where itâ€™s not just about teacher payâ€”as important as that is, and it is very importantâ€”(but) itâ€™s about making schools thriving places for students and hubs for the community.â€�

Joseph McCartin, executive director of Georgetown Universityâ€™s Kalmanovitz Initiative for Labor & the Working Poor, says this bargaining for what unions dub â€œthe common goodâ€� is on display elsewhere. That drive â€œhas led unions to say we donâ€™t want to bargain anymore in the box thatâ€™s presented to us by the law.â€�

That view gets some buy-in from others not associated with labor activism. Such as Diane Ravitch, an education historian who served as assistant U.S. secretary of education under Republican President George H.W. Bush.

Some other factors are hardening the union’s stance as well. Like the fact that Sharkey just got the job of president and has yet to make his bones, or the fact that the union would like to embellish its clout so it can get things such as an elected school board out of the Illinois General Assembly. But in the end, it’s all about who’s the boss.

â€œCTU needs to show power, particularly after the mayoral election,â€� in which the union bet a ton on a losing candidate, Cook County Board President Toni Preckwinkle, says one longtime major Chicago political player. â€œThey want to show power, to leverage other things from Springfield, to show their own members that they still have their stuff.â€�