Bacterial cell walls have several surface proteins that help them degrade different materials. For example, some proteins can help them degrade plant fibers. These protein complexes, named cellulosomes, are linked together by very strong interactions. 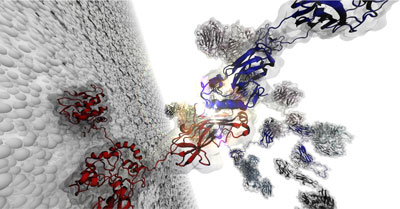 This illustration shows a complete cellulosome over a bacterial cell-wall surface. The image highlights a cohesin:dockerin interface. One of these interfaces was observed to withstand up to 1nN in force-load. (Image courtesy Rafael Bernardi)

â€œWe are interested in proteins that are very resilient to force,â€� said Rafael Bernardi, a research scientist at the Beckman Institute. Bernardi and his colleagues studied a protein system that can withstand up to 1 nN. According to Hermann Gaub, a professor at Ludwig Maximilian University of Munich and an author on the paper, the system is about 1000 times stronger than the muscle motor protein that allows us to move our arms and legs.

â€œThe whole system is a very large complex of proteins,â€� Bernardi said. â€œWe were interested in using computational methods to understand how they assemble because they are like Lego bricks: You have a lot of them and you can assemble them in different ways.â€�

After making the computational models, Bernardiâ€™s collaborators in Munich and Basel, make the protein complexes in the lab and try to pull them apart to understand how the complexes are assembled. â€œWhen they started doing the experiments, we realized that these complexes are much stronger than most systems that have been studied before,â€� Bernardi said.

The results are detailed in the paper â€œMechanisms of Nanonewton Mechanostability in a Protein Complex Revealed by Molecular Dynamics Simulations and Single-Molecule Force Spectroscopyâ€� that was published in the Journal of the American Chemical Society. 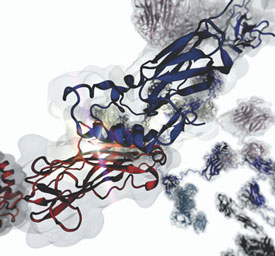 This up-close image of a cohesin:dockerin interface shows that a relatively simple and flat contact surface can be extremely stable under force-load. The interface is actually â€œactivatedâ€� when force is applied, in a mechanism that we call a catch-bond. (Image courtesy Rafael Bernardi)

Protein systems that can withstand forces are important for several reasons. â€œThere are bacteria that can adhere to implants and cause infections,â€� said Zaida â€œZanâ€� Luthey-Schulten, a professor of biophysics and quantitative biology and a Murchison-Mallory Endowed Chair in Chemistry. â€œWith these insights, we can come up with strategies to prevent that.â€�

Bernardi uses the Blue Waters supercomputer at the University of Illinois to make his computational models. â€œWe know the position of every atom in the protein at every moment in time,â€� Bernardi said. â€œWe can then use intelligent design to tell the experimentalists what aspects are important. All our simulations were able to predict what they found in the experiment.â€�

The computational models work the best when there are strong forces involved. In the future, Bernardi is interested in looking at proteins that are involved with weaker forces. â€œThere is a lot of biology that involves weaker forces, for example proteins like myosin. If you make a single mutation that increases the force resilience, you can cause heart problems,â€� Bernardi said.

â€œWe really like integrating experiments, theory, and simulations,â€� Luthey-Schulten said. â€œItâ€™s nice when you can start making predictions and you have willing collaborators who will do the experiments. Without Bernardiâ€™s simulations, Gaubâ€™s group would not know which experiments to do next.â€�

The paper, â€œMechanisms of Nanonewton Mechanostability in a Protein Complex Revealed by Molecular Dynamics Simulations and Single-Molecule Force Spectroscopy,â€� can be found at https://doi.org/10.1021/jacs.9b06776