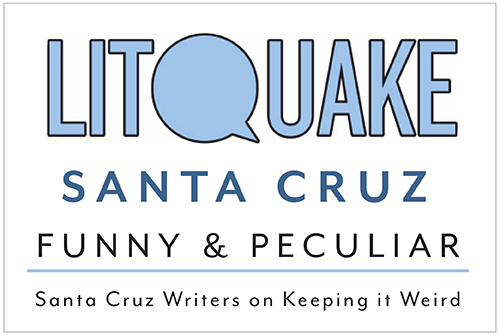 Since then, it has grown to become the largest independent literary festival on the West Coast, each year presenting a 10-day mix of hundreds of readings, interactive workshops, and cutting-edge panel discussions.

This year, in honor of its 20th anniversary, Litquake has created 20 new events in 20 cities across the country outside of San Francisco. One of those events will take place at Bookshop Santa Cruz on October 15, co-presented by The Humanities Institute at UC Santa Cruz.

Titled â€œFunny & Peculiar: Santa Cruz Writers on Keeping it Weird,â€� the LItquake Santa Cruz evening will be hosted by local authors Dan White and Amy Ettinger. White is the author of The Cactus Eaters: How I Lost My Mind and Almost Found Myself on the Pacific Crest Trail and Under The Stars: How America Fell In Love With Camping.

Ettinger, a UCSC alumna (Merrill ’95), is the author of Sweet Spot: An Ice Cream Binge Across America, and teaches writing at Stanford Continuing Studies.

Together they will moderate a panel of notable Santa Cruz writers that include Elizabeth McKenzie, Micah Perks, Peggy Townsend, Liza Monroy and Wallace Baine.

â€œThe theme for the event is ‘funny and peculiar,'” said White. â€œThe general idea is: itâ€™s 2019 and things could not get any stranger, so why not mine the oddities of life with these five distinguished local writers? Each of these writers has a joyfully off-kilter way of looking at the world. Their work will give the audience members a taste of the quirky side of life.”

“This is the first-ever Litquake event in Santa Cruz,â€� White added. â€œIt’s great for our writing community, and it sends a positive message. We’ve had a thriving literary scene for a long time, but our writing scene doesn’t get the same exposure as the larger writing hubs like LA and San Francisco. We have so many creative and talented people doing great work here. I think of our writing scene as one of those ‘best kept secrets.'”

Ettinger observed that it makes sense that Litquake would expand to include local writers because Santa Cruz has such a rich and vibrant literary community.

â€œI feel that each year the literary community grows, bolstered by the wonderful events that are hosted by Bookshop Santa Cruz,â€� she said. â€œWhen I was a student at UC Santa Cruz in the 1990s, I remember spending time at the bookshop, hearing authors speak, browsing the shelves, and jotting down the ideas for stories, which I later finished writing across the street at Lulu Carpenter’s. These were stories I workshopped at creative writing classes at UC Santa Cruz.â€�

â€œI’m proud to be joining the other writers on our panel in representing UCSC and also celebrating the wonderfully weird and sometimes peculiar Santa Cruz writing world,” Ettinger added.

Elizabeth McKenzie received a B.A. in Literature from UC Santa Cruz in 1981. Her novel The Portable Veblen was longlisted for the National Book Award for fiction and received the California Book Award for fiction. Her work has appeared in The New Yorker, The Atlantic, Tin House, and Best American Nonrequired Reading.

Micah Perks is a professor of literature and co-director of the Creative Writing program at UC Santa Cruz. She is the author of four books, most recently a book of linked short stories, True Love and Other Dreams of Miraculous Escape and the novel What Becomes Us, winner of an Independent Publisherâ€™s Book Award and named one of the Top Ten Books about the Apocalypse by The Guardian. Her short stories and essays have appeared in Epoch, Zyzzyva, Tin House, and The Rumpus, and various other journals and anthologies. She has earned five Pushcart Prize nominations, residencies at MacDowell and Blue Mountain Center, and the New Guard Machigonne 2014 Fiction Prize.

Wallace Baine is an award-winning journalist and arts writer who regularly contributes to Santa Cruz Good Times, Metro Silicon Valley and the San Francisco Chronicle. His work has been syndicated in newspapers nationwide and his fiction has appeared in the Catamaran Literary Reader, the Chicago Quarterly Review, and as part of the Santa Cruz Noir collection of short stories. His most recent book is a history of Bookshop Santa Cruz called A Light in the Midst of Darkness.

Peggy Townsend is an award-winning newspaper journalist and author of the bestselling 2018 mystery novel, See Her Run, as well as its follow-up, The Thin Edge, both published by Thomas & Mercer. As a reporter, she has covered serial killers, murder trials and once chased an escaped murderer through a graveyard at midnight. When she isnâ€™t outdoors, sheâ€™s either writing magazine profiles for UC Santa Cruz or working on her third novel. Townsend divides her time between Santa Cruz and Lake Tahoe.

Liza Monroy is the author of three books: the novel Mexican High; the memoir The Marriage Act: The Risk I Took To Keep My Best Friend in America and What It Taught Us About Love; and the essay collection Seeing As Your Shoes Are Soon To Be On Fire. Her writing has appeared in The New York Times, the LA Times, The Washington Post, O, Marie Claire, Jezebel, Catamaran, and other publications. One of her columns for the New York Times‘ “Modern Love” will appear in this fall’s anthology of the “most popular and unforgettable essays” of the series. She teaches writing at UC Santa Cruz and lives downtown with her husband, two tiny humans, a pug and unruly potbellied pig SeÃ±or Bacon. Currently, she is writing her second novel, a dark comedy of technology and obsession.

Litquake Santa Cruz: Funny & Peculiar: Santa Cruz Writers on Keeping it Weird takes place on Tuesday, October 15, beginning at 7 p.m. Admission is free and open to the public. This event is co-sponsored by The Humanities Institute at UC Santa Cruz.