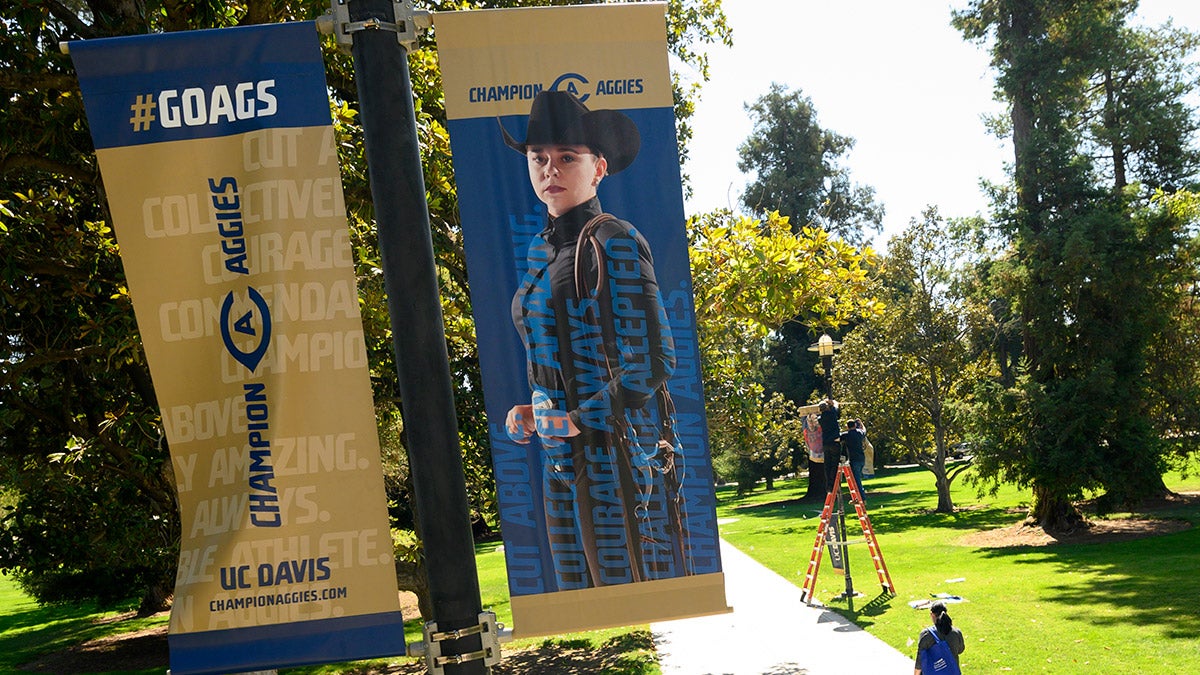 UC Davis is known for its world-class academics â€” with the university itself and numerous programs earning top global rankings â€” and now a new campaign is highlighting the success of the more than 700 student-athletes who have transformed the campus into one of the best Division I athletics programs in the nation.

â€œWe have a lot of Aggie Pride on campus, particularly for our academic programs,â€� said Kevin Blue, director of Athletics for UC Davis. â€œWe want to spread that pride to our student-athletes who personify the combination of excellence in academics, athletics and personal growth.â€�

The â€œChampion Aggiesâ€� campaign launched during the initial weeks of the fall quarter with a dedicated webpage housed on the universityâ€™s main site and light-pole banners featuring fall-sport student-athletes. The banners will change during the winter and spring quarters to feature members of teams competing in their respective seasons.

Also, for the first time, UC Davis Athletics has an advertising presence at Sacramento International Airport, with big poster ads in the terminals.

The community will see more signage in the Memorial Union and Activities and Recreation Center, sporting phrases that, like Champion Aggies, comprise two words starting with â€œCâ€� and â€œAâ€� â€” â€œCut Above,â€� â€œCollectively Amazing,â€� â€œCourage Alwaysâ€� and â€œChallenge Acceptedâ€� â€” a nod to UC Davis Athleticsâ€™ new heritage logo in which the â€œAâ€� sits inside a â€œCâ€� with a comet tail.

Soon, a Unitrans bus will turn from red to blue with a Champion Aggies-themed wrap showing some of the student-athletes from UC Davisâ€™ 25 Intercollegiate Athletics programs.

â€œThis campaign will help strengthen the connection of our athletics program to students, faculty, staff, alumni, the Davis community and sports fans across the country,â€� said Blue. â€œWe hope the campaign will foster even greater school spirit and support for our student-athletes.â€�

COVID-19 Science Six Months in: What Have We Learned?

A Living, Learning Laboratory for All