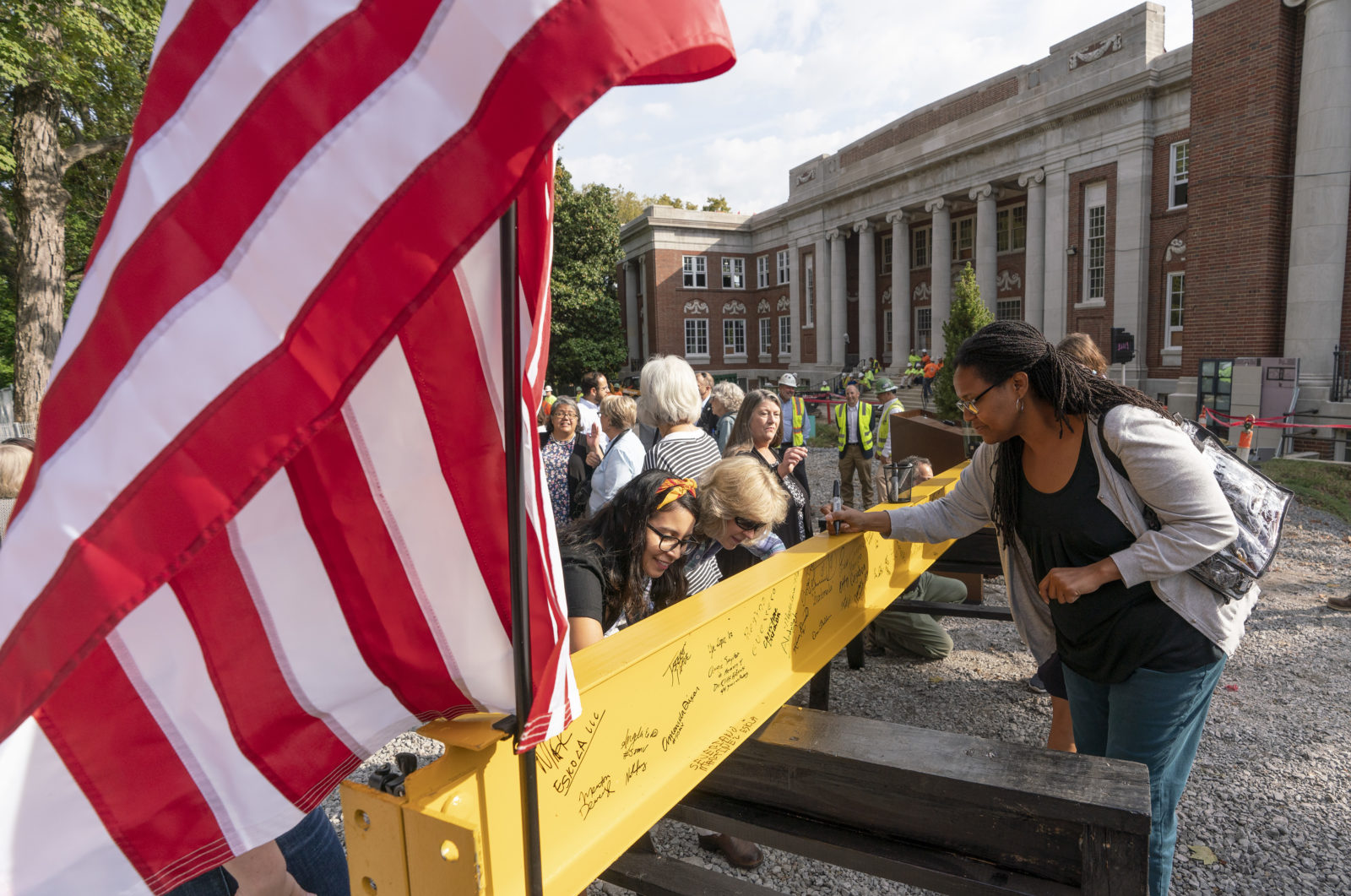 Vanderbilt Universityâ€™s Peabody Neighborhood project achieved a major milestone on Oct. 10 with the placement of the final steel structural beam in the new connector between the Home Economics and Mayborn buildings.

â€œAs we raise this last and highest structural beam, it is a symbol of our hope for the entire Peabody campusâ€”the departments, faculty, staff and studentsâ€”and a sign of looking ahead for the whole university,â€� Wente said. â€œA key component of our FutureVU efforts is to embrace our park-like setting, build greenways that connect us and allow people to feel our welcoming community. This design, renovation and addition will create access for all in an open and transparent space.â€�

Dating as far back as 700 A.D., topping out ceremonies mark the placement of the final or top structural beam during a construction project. As is the tradition, the Peabody College ceremony included the placement of an evergreen tree and flag on the gold-painted beam to symbolize protection for the construction crew and future occupants of the building. Members of the Peabody community also signed the beam before it was raised.

â€œWe can now, starting today, look forward to a campus graced by these two revitalized academic buildings with the new connector,â€� Dean Benbow said. â€œThese buildings will support student learning, discovery of new knowledge and engagement with the campus and the local community that Peabody serves. All three will contribute to making Vanderbilt more vibrant and inclusive, and each of you is part of that future, too.â€�

When completed, the renovated buildings will feature three active learning spaces, more than a dozen other classrooms, and nine research and work rooms and laboratories. The design and construction of the renovations and new connector are guided by the FutureVU Sustainability initiative, with a goal of earning Living Building and LEED certifications.

â€œPeabody Collegeâ€™s campus has been nationally recognized over the last decade, and this project will allow the continuation of that prominence throughout the nation, not just for teaching but also setting a new standard of sustainability with being Living Building certified,â€� Schneider said. â€œInnovation and technology will propel these classrooms into the next generation and the next century.â€�