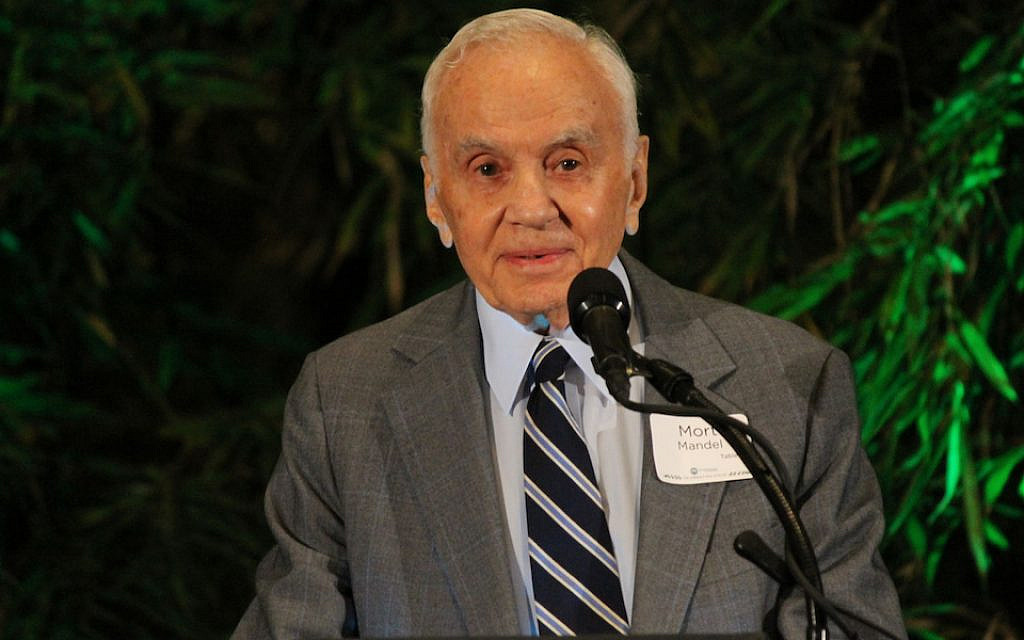 Morton Mandel, a Cleveland businessman who donated tens of millions of dollars to Jewish causes, has died.

Mandel died Wednesday at his home in Florida, according to the Cleveland Jewish News. He was 98.

His family left Poland for the United States in 1913. Mandel was born in Cleveland in 1921.

In 1940, he and his two brothers, Jack and Joseph, founded Premier Industrial Corp., an auto parts distributor that built off their uncleâ€™s small store. It became a worldwide company listed on the New York Stock Exchange in 1964 and merged with United Kingdom-based Farnell Electronics in 1996 to form Premier Farnell.

In 1953, the brothers founded the Jack, Joseph and Morton Mandel Foundation, which has contributed to a number of Jewish and non-Jewish causes. The foundation has supported institutions including the Mandel Center for Studies in Jewish Education at Brandeis University and the Mandel Center for Advanced Holocaust Studies at the US Holocaust Memorial Museum in Washington, D.C.

In 1990, the foundation launched a branch in Israel to support a range of programs there.

Mandel founded more than a dozen nonprofit organizations and served as president of United Way Services in Cleveland. He received a number of awards for his work, including the Presidential Award for Private Sector Initiatives presented by former US President Ronald Reagan.

â€œThe State of Israel and the Jewish people mourn the passing yesterday of a dear and beloved friend, a fine Jew who loved his people,â€� Rivlin said in a statement issued by his office. â€œMort said that the measure of success is not money or fame, but rather the ability to look at oneself in the mirror and see that the reflection is a good person, a â€˜mensch.â€™ There is no doubt that Mort was a true mensch, a man who built his successful businesses with his own two hands, but never forgot those he met along the way.

â€œMort loved Israel with his heart and soul and there are many institutions in our country that bear his name and will continue to do so, in the fields of research, education, science, society and economics,â€� he added.

â€œI do not doubt that the seeds Mort Mandel planted and cultivated until his last day, for the State of Israel and the Jewish people, will continue to bloom for generations to come,â€� Rivlin concluded.

Mandel is survived by his wife, Barbara, their three children and seven grandchildren.