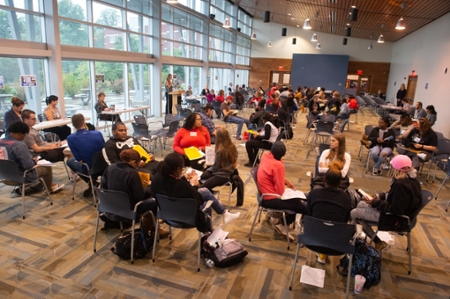 More than 60 Southern Illinois University Edwardsville students went through a few hours with their newly acquired identities, and more importantly, financial net worth, determining how to eat, shop, work, get to school, pay bills and survive.

The School of Education, Health and Human Behavior (SEHHB) Department of Applied Healthâ€™s Nutrition Program and the Food and Nutrition (FAN) Club held a poverty simulation on Thursday, Oct. 10 in the Multifunction Room in Evergreen Hall. During the simulation, students role-played the lives of low-income families to empathize with what life is like month-to-month for those living in poverty, according to Jennifer Zuercher, PhD, RD and assistant professor in nutrition, one of the event coordinators. 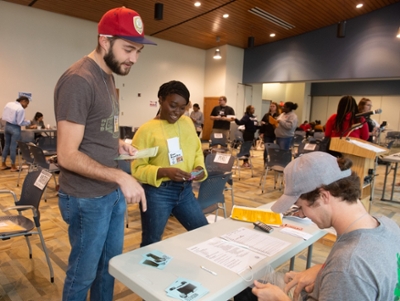 In the simulation, participants were assigned to various families. Some were newly unemployed, recently deserted by the â€œbreadwinner,â€� homeless, recipients of Temporary Assistance for Needy Families (TANF), senior citizens receiving disability or retirement, or grandparents raising their grandchildren.

â€œThis is a simulation and not a game,â€� said Zuercher. â€œYou may be tempted to treat it as a game because of the play money and other props that are part of it. The statistics and situations are real and based on real life experiences.

â€œPoverty is not a game for the more than 39 million Americans and the more than 35,000 Madison County residents who are living in poverty,â€� she emphasized.

SIUE junior Drake Aten is sitting in his â€œhouseâ€� with his â€œnine-year-old sonâ€� senior Michael Ademiyi, looking and feeling overwhelmed. Minutes ago, a representative from his mortgage company posted a warning on his front door, and told him he had until next week to make his payment or face eviction.

â€œI got the eviction warning, because I wasnâ€™t able to make it to work,â€� said Aten, who is playing the role of 40-year-old Quenton. â€œI donâ€™t have any transportation, and I didnâ€™t have the cash on me at the moment. I donâ€™t get paid until end of the week.â€�

Quenton is a single dad with a nine-year-old son, a 20-year-old daughter and a one-year-old granddaughter. His ex-wife does not pay child support.

â€œThis is tough. I tried to play this out 1,000 times in my head,â€� Aten continued. â€œA survey question asked â€˜Do you believe that people in poverty are not as smart as others?â€™ I answered I did not believe that at all. Looking at this, they have to be twice as smart just to make it.â€�

Poverty affects the entire family, added Ademiyi, who is playing Kirby, the nine-year-old son of Quenton. â€œItâ€™s crazy watching my parent and older sister go through this. It takes some of the fun away for me. Poverty can be hard on the kids, as well.â€�

Several SIUE students who completed the Oct. 10 poverty simulation will serve as community representatives in the same simulation that will be conducted for teenage participants from Metro East Community Church later this month.

(L-R) SIUE students Jake Schnettler a senior majoring in civil engineering; and Kaylin Daggs, a junior majoring in public health, talk to one of the community resources about something they need.