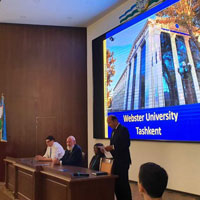 Members of the admissions team from Webster Uzbekistan visited lyceums and universities in two of the countryâ€™s regions, Samarkand and Kashkadarya.

The goal of the three-day-long series of meetings was to build the Webster brand in cities outside the capital and to inform current high school and undergraduate students about Bachelor’s and Master’s programs offered in the Tashkent campus.

Each visit in Samarkand and Karshi included a presentation covering Webster Universityâ€™s history, mission, and admissions, followed by a questions and answers session. This way, students received immediate responses to any concerns or confusion they had about Webster Uzbekistan.

The most frequent question was about entrance exams, an issue that often becomes a deciding factor for whether a student in Uzbekistan will even try to apply to any given higher learning establishment. They were assured that Webster Uzbekistan does not have entrance exams since as an American university, it uses other benchmarks to select candidates.

Those who came to the info sessions also learned about Websterâ€™s guiding principles of individualized education, lifelong learning, and global citizenship.

Having opened this fall, it is important for Webster University in Uzbekistan to actively cultivate its brand and promote the Webster idea of global American education. Traveling to meet potential students also demonstrates an openness to admitting applicants from across the country.

The admissions team has more city tours planned for the future, including Bukhara, Urgench and potentially Nukus in the Republic of Karakalpakstan.