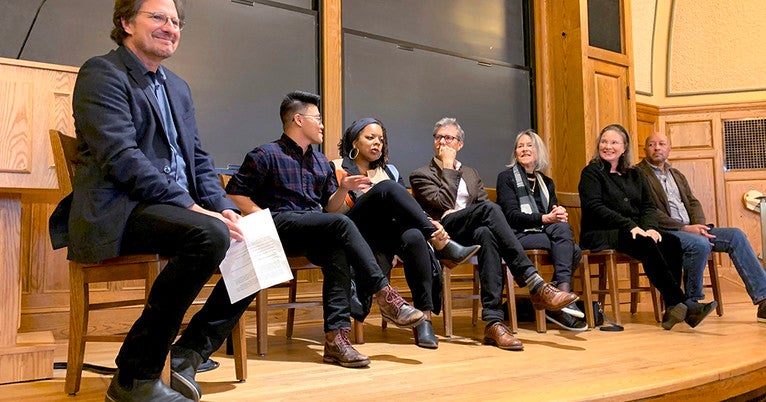 For a poet who is little known, winning an award like the Yale Younger Poets Prize can be life changing, noted Airea D. Matthews, who earned that honor in 2016.

In a panel discussion on Oct. 11, Matthews and several other poets who have won the Yale Series of Younger Poets competition agreed that the prize, awarded since 1919 by Yale University Press, has hugely benefitted their careers, but some said there can be a downside to prizewinning.

The Yale Younger Poets Prize is given to emerging poets who currently reside in the United States and have not previously published a book of poetry. It is the oldest annual literary award in the nation. Yale University Press publishes the winning manuscripts. Recipients have included such noted poets as Muriel Rukeyser, Adrienne Rich, W.S. Merwin, John Ashbery, and John Hollander. The panel discussion â€” which was sponsored by Yale University Press, the English department, and the Beinecke Rare Book and Manuscript Library â€” is part of a series of events being held to celebrate the prizeâ€™s 100th anniversary.

At the discussion, Matthews was joined by fellow prizewinners Carolyn ForchÃ© (1975), Peter Streckfus (2003), and Yanyi (2018). Also on the panel were the poets Carl Phillips, who has been the judge for the Yale Series of Younger Poets competition since 2010, and Louise GlÃ¼ck, the judge from 2003 to 2010.

Langdon Hammer, the Niel Gray Jr. Professor of English, moderated the discussion. He opened by asking whether a â€œprize cultureâ€� has pervaded the literary world, and whether or not the privilege of being chosen for a prize has any negative effects.

â€œI canâ€™t think of any drawbacks,â€� answered Streckfus. â€œThe year my book [â€œThe Cuckooâ€�] was selected, there were a lot of really amazing first books that came out, and I feel lucky to have somehow been in that pile that went to Louise [GlÃ¼ck] and that she selected. It felt like good fortune to have this special reader and friend, and to have more readers than I would otherwise because of the prize.â€�

Phillips said that while winning a prize for a first book of poetry is especially â€œconfirming,â€� he believes the plethora of literary prizes can be an intrusion of sorts.

The prize culture can distract you from what the purpose is, which is the very private art of making, it seems to me.

â€œThe prize culture can distract you from what the purpose is, which is the very private art of making, it seems to me,â€� he said, noting that prize-winning writers may sometimes feel anxiety about how their subsequent works will be received.

â€œIâ€™ve enjoyed being the judge of this particular prize because itâ€™s about the first book,â€� Phillips added. â€œThat seems so pure in some way. And it seems nothing but a good thing to help someone elseâ€™s voice into the world. After that, itâ€™s dicey.â€�

GlÃ¼ck said that a â€œculture of rewardâ€� can unintentionally influence whether a writerâ€™s reputation ascends or plummets. She added that such a culture â€œleaves many more outâ€� of having recognition, some of whom are â€œextraordinary writers.â€�

While noting that winning the Yale Younger Poets Prize for her first collection, â€œSimulacra,â€� validated her as a poet, Matthews said it also has made her feel a sense of responsibility to give back, particularly by helping emerging poets who havenâ€™t had access to the same resources and opportunities she did. She became inspired to do so, she said, after reading about the suicide of a Chinese factory worker who wrote â€œincredible versesâ€� and wanted to be a poet but didnâ€™t have the option to be anything but a laborer.

â€œItâ€™s been important for me, having somewhat of a platform since the win, to get resources to the people who are under-resourced,â€� Matthews said. â€œIâ€™ve tried to use the internet as a platform to get resources out.â€� She said she envisions an online global platform where those newer to the craft of writing can learn from established poets, writers, and literary prize judges.

Phillips noted other ways to give back include teaching, mentoring, or serving as a judge for literary prizes.

â€œIt could be writing reviews or inviting people to come to [give a reading],â€� he added. â€œIâ€™m acknowledging that itâ€™s luck, of course [to win a literary prize]. Itâ€™s talent as well, but itâ€™s luck because often the most talented donâ€™t get recognized ever. It seems that [we] owe it to help others, if possible. At least it can make the prize culture, in a way, do something good with the power that I feel compromised about sometimes.â€�

Like many prizewinners, ForchÃ© has given back by teaching and mentoring, she said. Since winning the Yale Younger Poets Prize, she has been honored with many other literary awards, including Yaleâ€™s Windham Campbell Prize.

ForchÃ© recalled that she came close to not even entering the Yale poetry competition. After first submitting her work in 1974, she received a letter from judge Stanley Kunitz complimenting her manuscript â€” but announcing she didnâ€™t win the prize. The following year, three days before the deadline, a friend called to encourage her to submit a manuscript again. ForchÃ© argued against it, saying that Kunitz clearly didnâ€™t think her poetry was â€œgood enough.â€� Her friend insisted.

â€œSo I typed it and I sent it off and I forgot about it,â€� recalled ForchÃ©, whose manuscript was titled â€œGathering the Tribes.â€� â€œYou just donâ€™t think youâ€™re going to win. You just think you are going to enter. And then I got a call from Chester Kerr [former director of Yale University Press]. I was completely stunned. I just screamed and danced around the office and ran out to the end of this sea of cars in the parking lot of San Diego State University and announced it to all.â€�

ForchÃ©â€™s experience was common, according to GlÃ¼ck, who said that many poets won the award on their second or even third try.

Coming from an Asian American immigrant family where he was pressured to become an engineer â€” and did so â€” Yanyi, who is also an editor and critic, said that his entire writing career has been about â€œgetting permission to do stuff because I didnâ€™t feel I could be a writer; I didnâ€™t think I could be a poet.â€� His winning manuscript is titled â€œThe Year of Blue Water.â€�

First books define a poetâ€™s relationship to themselves and to whatâ€™s come before them.

The panelists also discussed whether their subsequent poetry collections differed from their first. Streckfus described his first collection as a â€œcoming into the art,â€� explaining: â€œThe first book is largely about warming your relationship with the voices that come before you and thinking about what it means to be yourself. First books define a poetâ€™s relationship to themselves and to whatâ€™s come before them.â€�

GlÃ¼ck lamented what she described as a tendency of many poets to feel the need to identify with â€” or represent â€” a particular group because of their skin color or gender preference.

â€œIdentity politics is big in poetry right now,â€� agreed Matthews. â€œPeople very much care about who they are and what they appear to be.â€� She said that one of her manuscripts was probably rejected numerous times by publishers because she was writing â€œoutside a certain [expected] aesthetic for a black woman.â€�

As a judge, Phillips said he has a â€œslight allergyâ€� to poetry collections that are a â€œprojectâ€� â€” built on particular identities or themes.

â€œIâ€™m interested in a sensibility, and I want to be invited to spend time with it,â€� he said, comparing the feeling to meeting an interesting person. â€œIâ€™d like to think I enjoy talking to them about many things, because I think people in real life are spontaneous and unpredictable. I prefer a manuscript that doesnâ€™t announce itself as if itâ€™s going to be this big arc â€” every poem will be this way. [I want] each page I turn to offer me something Iâ€™m excited about.â€�

Following the discussion, Yanyi, Matthews, and ForchÃ© read from their work at the Beinecke Library. There it was also announced that Rae Armantrout will be the next judge of the Yale competition, succeeding Phillips.

As part of the Yale Series of Younger Poets Prize 100th-year celebration, nearly 20 winners of the award will participate in readings in cities across the country to mark the publication of â€œFirsts: 100 Years of Yale Younger Poets.â€� The book, edited by Phillips and published by Yale University Press, features selections from each Younger Poets volume.