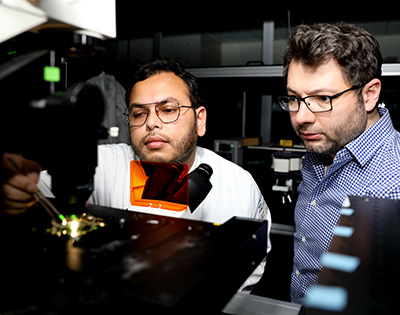 Researchers at UC Santa Cruz have developed ultrasensitive nanoscale optical probes to monitor the bioelectric activity of neurons and other excitable cells. This novel readout technology could enable scientists to study how neural circuits function at an unprecedented scale by monitoring large numbers of individual neurons simultaneously. It could also lead to high-bandwidth brain-machine interfaces with dramatically enhanced precision and functionality.

Monitoring the electrical activity of neurons is conventionally done using microelectrode arrays, but these are difficult to implement at a large scale and offer limited spatial resolution. In addition, the electronic wiring required for readout is a major limitation of microelectrodes, according to Ali Yanik, assistant professor of electrical and computer engineering at UCSC’s Baskin School of Engineering.

“The extremely limited bandwidth of the electronic wiring is a bottleneck created by the very nature of electrons,” Yanik said. “We turn to photons because light offers billion-fold enhanced multiplexing and information carrying capabilities, the same reason why the telecommunication industry moved to fiber optics. By converting bioelectric signals to photons, we will be able to transmit large-bandwidth neural activity optically.”

Yanik’s lab, working with collaborators at the University of Notre Dame, has developed extracellular nanoprobes that enable ultrasensitive optical monitoring of electrophysiological signals. Other optical monitoring techniques require genetic modifications to insert fluorescent molecules into cell membranes, which rules out their use in humans.

Yanik’s approach is similar to extracellular microelectrode techniques, except that the readout mechanism is optical and the probes have nanoscale dimensions. In addition, it yields a much brighter signal and higher signal-to-noise ratios than fluorescence-based probes.

“Harnessing the unparalleled multiplexing and information-carrying capability of light to dissect the neural circuitry and decrypt electrophysiological signals has been a goal of neuroscientists for nearly 50 years. We may have finally found a way to do that,” Yanik said.

The new technology is described in a paper published October 18 in Science Advances. Ahsan Habib, a Ph.D. candidate in Yanik’s lab, is first author of the paper.

Although the technology is still in the early stages of development, Yanik said it could open the door to a wide range of applications. Ultimately, he said, it may lead to powerful brain-machine interfaces, enabling the development of new brain-controlled prosthetic technologies for people with disabilities.

Yanik’s optical nanoprobes are nanoscale devices (less than 100 nanometers in diameter) based on a novel metallic antenna structure coupled to a biocompatible polymer called PEDOT. This polymer is “electro-chromic,” meaning its optical properties change in response to the local electric field. The antenna is a “plasmonic nanoantenna,” meaning it uses nanoscale interactions of light and matter in a way analogous to a radio antenna. The result is an “electro-plasmonic nanoantenna” that provides reliable optical detection of local electric field dynamics with remarkably high sensitivity.

“The electro-plasmonic nanoantenna has a resonance frequency that changes in response to the electric field, and we can see that when we shine light on it, so we can read the signal remotely,” Yanik explained.

The researchers performed a series of laboratory experiments to characterize and optimize the properties of the electro-plasmonic nanoantenna. They then tested its ability to monitor electrophysiological signals in cell cultures of cardiomyocytes (heart muscle cells which, like neurons, can generate electrical impulses). The results demonstrated real-time, all-optical detection of electrical activity in cardiomyocytes, with high signal-to-noise ratios.

Aside from not requiring genetic manipulations, the advantages of this technique over fluorescent probes include the very low light intensities needed, two to three orders of magnitude lower than the typical light intensities used for fluorescent voltage probes. In addition, the fluorescent molecules are susceptible to bleaching and generate disruptive oxygen free radicals.

Yanik described two possible approaches for using the optical nanoprobes to monitor neural activity in living animals, including humans. The probes could be integrated with an optical fiber into a flexible and biocompatible implant, or they could be synthesized as nanoparticles suspended in a colloidal solution, with surface proteins attached to enable the probes to bind to specific cell types.

“With the solution-based system, you could inject it into the bloodstream or into an organ, and the nanoprobes attach to the specific cell types you want to monitor,” Yanik said. “We are just at the beginning stages of this, but I think we have a good foundation to build on.”

An important consideration for using neural probes in living animals is the inherent immune response to foreign materials in the body. Previous studies have shown that coating electrodes with the biocompatible PEDOT polymer dramatically improves the long-term performance of microfabricated neural prosthetic devices. The size of implants also influences the immune response.

“The critical feature sizes are 10 to 15 microns. Recent studies have shown that smaller size implants lead to dramatically reduced inherent immune response,” Habib said. “In this sense, our PEDOT-coated probes with nanoscale dimensions are particularly advantageous for long-term operation.”

In addition to Habib and Yanik, the coauthors of the paper include UCSC graduate students Xiangchao Zhu and Maverick McLanahan, and Uryan Can and Pinar Zorlutuna at the University of Notre Dame. This work was supported by grants from the National Science Foundation.