Vanderbilt senior Kaylann Boyd has never been one to back down from a challenge.

And to be quite honest, she considers herself grateful for those challenges that have always been placed in front of her.

â€œItâ€™s hard. I mean, it really is,â€� Boyd said about life as a Vanderbilt student-athlete. â€œItâ€™s a lot of hard work, a lot of late nights of studying and a lot of times where youâ€™re like, â€˜God, my body is barely going to get through this practice.â€™ But, again, itâ€™s your mentality of how youâ€™re going to attack the day and how are you going to let it attack you?

A senior forward for the Commodores, Boyd has developed into one of the SECâ€™s top players throughout her career. But a collegiate path that included Vanderbilt seemed unlikely during childhood.

Boydâ€™s family and educators found that the promising athlete had dyslexia and attention-deficit/hyperactivity disorder.

â€œThey have been more than helpful when it comes to communicating that. Thatâ€™s on me to judge whether or not this class is going to be a struggle or in this class Iâ€™m going to be alright.â€�

An attitude of acceptance combined with a dedication to overcome has allowed Boyd to flourish â€“ not only on the field, but off of it.

Boyd started 21 games as a junior and scored eight times. Sheâ€™s played in 10 matches this season and started four of those as the Commodores make another late push toward the postseason.

In the classroom the psychology major â€“ with an emphasis in child studies â€“ has turned her learning disability into a passion for helping others.

â€œI just have a big heart for kids,â€� she said, â€œespecially because I think I do have that passion for never wanting some kid to think theyâ€™re dumb or that they donâ€™t fit in into a school system or wherever they are.â€�

Boyd remembers her early childhood being a struggle when it came to academics. She admits that a lot of the times she masked and hid her inability to read and comprehend even the simplest of tasks.

She felt dumb and different and played pretend in hopes that no one would notice her struggles. Teachers and family did notice, however, and soon Boyd was attending a speech school. After extensive testing she came to terms with what she had to do.

â€œI think once I accepted, OK, I really do need to get my hands dirty, learn how to read, listen to what these people are telling me, I just kind of jumped right in,â€� she said. â€œI took everything in that anyone was expressing to me and I also was just one of those kids that was just constantly asking questions wanting to know more â€“ which I donâ€™t think most kids are.

â€œThankfully my mom kind of ground that into me. â€˜If you donâ€™t understand something, ask.â€™ I was very open, asking questions, wanting to know more information on how to do certain things or different ways to do certain things. Then just sitting back and evaluating. Say I didnâ€™t do well on this test and I studied a certain way, maybe I shouldnâ€™t attack it that way the next time.â€�

A graduate of the Greater Atlanta Christian School, Boyd enrolled at Vanderbilt in 2016 and played in every match that season for head coach Darren Ambrose. Sheâ€™s been a part of a senior class that has won 48 games and counting.

Ambrose said Boydâ€™s growth has been in direct correlation with being placed in uncomfortable situations on the pitch and on West End.

â€œIâ€™ve had some very personal and private conversations with her as she was going through a lot of challenges,â€� Ambrose said. â€œThe reward has been seeing her give back and invest in an area that I know she feels that she can affect, an area in which she struggled herself, I think is really kind of cool. And it says everything about her.

â€œShe wants to give back, she wants to work with kids. I think she has the perfect personality to do that. Sheâ€™s a very giving person in so many ways and has a very kind personality. I think thatâ€™s what itâ€™s going to take for her to have the impact that she wants in that field.â€�

Boyd said during the past four years she has found her calling in wanting to help others who have may gone through the same struggles she has. She cited Ann Neelyâ€™s learning literature class as a major influence as well as courses in developmental psychology, adolescent development and womenâ€™s and gender studies.

She also recalls during her years as a tutor working with a child who showed signs of being autistic and explaining to the parents their child was simply different than others â€“ just like Boyd is different.

â€œIâ€™ve always kind of stuck with the same thing, which is just, â€˜thereâ€™s nothing wrong with you whatsoever,â€™ and making sure that they understand that. Theyâ€™re just different. There is nothing wrong with them,â€� Boyd said. â€œMy mom said that to me growing up because she never wanted me to feel in the wrong or that I was dumb or that I couldnâ€™t read. 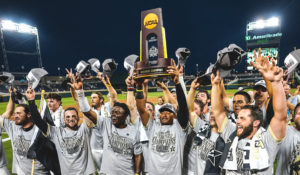