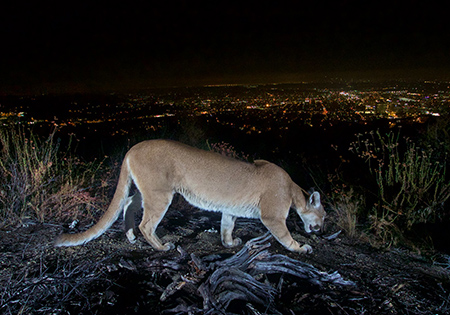 A female puma in the Verdugo Mountains overlooking the Los Angeles nightscape. Inbreeding in small, isolated populations can lead to reproductive failure and other problems. (Photo credit: National Park Service)

P-22, better known as the mountain lion of Hollywood, has been living in Griffith Park since early 2012. (Photo credit: National Park Service)

A Florida panther seeks refuge up a live oak in Big Cypress National Preserve. The consequences of geographic isolation on puma genetic diversity and fitness have been well documented in Florida panthers. (Photo by Darrel Land, Florida Fish and Wildlife Conservation Commission)

A puma kitten peers through a hole in a redwood log in the Santa Cruz Mountains. (Photo by Sebastian Kennerknecht)

When students at UC Santa Cruz found a dead mule deer on campus, they figured it had been killed by coyotes. Wildlife biologist Chris Wilmers rigged up a video camera to spy on the carcass at night. But the animal that crept out of the shadows to dine on the deer was no coyoteâ€”it was a mountain lion.

Mountain lions, or pumas, stay close to their prey, â€œso it must have been hiding in a nearby gorge all day,â€� said Beth Shapiro, professor of ecology and evolutionary biology at UCSC and a Howard Hughes Medical Institute investigator.

The persistent puma was already well-known by Wilmers, a professor of environmental studies at UCSC who had radio-collared and tagged the animal, dubbed 36m, as part of a long-term study of California mountain lions. Now 36m is becoming even more famous as the first puma to have its complete genome deciphered by scientists.

In a paper published October 18 in the journal Nature Communications, Shapiro, Wilmers, and their colleagues reported that the information in 36mâ€™s genes may lead to better conservation strategies.

Many puma populations across North America are becoming increasingly isolated, Wilmers said. That ups their chances of succumbing to inbreeding and its consequences, which include serious abnormalities such as damaged hearts and malformed sperm. With whole genomic information, however, scientists can pinpoint populations that need an influx of new genes or identify the best pumas to move between populations.

According to Shapiro, such work could stop inbreeding in its tracks and help keep local populations from going extinct. â€œThis is the first time that whole genomes have been used in this way,â€� she said.

The teamâ€™s new sequencing work is not the first effort to unlock pumasâ€™ genetic secrets. Years of painstaking research by geneticist Stephen Oâ€™Brien, molecular ecologist Warren Johnson, and others had previously shown that Floridaâ€™s tiny population of pumas (also known as cougars or panthers) had become dangerously inbred, resulting in health defects like holes in their hearts and missing testicles. These abnormalities threatened the animalsâ€™ ability to reproduce.

The research team also proved that the introduction of eight female cougars from west Texas in 1995 had added enough new genes to boost health and help the population grow from about 30 individuals to more than 120. But the teamâ€™s effort was limited by the genetic technology available at the time, which relied on analyzing just small snapshots of DNA, or markers, scattered throughout the genome. So the scientists didnâ€™t have a complete picture of the pumasâ€™ genes.

Animals get two versions of every gene â€“ one from mom and, usually, a different one from dad. This means that offspring have the genetic diversity needed to keep populations healthy. But when populations become small and isolated, relatives breed with each other. As a result, genetic diversity plunges, and many genome locations end up with two identical versions of a gene. Thatâ€™s when weird things happen to animals, like the kinked tails, damaged hearts, and malformed sperm found in the inbred Florida panthers before the infusion of Texas cougar genes.

Using DNA markers alone, scientists can estimate the average amount of genetic variation within a population and get a rough picture of the level of inbreeding. But this approach canâ€™t say whether major stretches of DNA between those markers contain copies of genes that are the same. These runs of identical gene copies are crucial, said Johnson, who is at the Walter Reed Biosystematics Unit and affiliated with the Smithsonian Conservation Biology Instituteâ€™s Center for Species Survival.

The number and length of these stretches provide a precise measure of both the extent of inbreeding and how recent it isâ€”and, therefore, how close a population is to falling off a genetic cliff. Inbreeding is not a slow and progressive process, Shapiro explained. Instead, she said, once enough long runs of DNA with identical copies accumulate, the effects of inbreeding kick in suddenly, like turning off a light switch.

From mammoths to mountain lions

Shapiro is best known for recovering and sequencing tiny bits of DNA from ancient bones, charting the genetic changes in mammoths and other now-extinct animals as their numbers shrank. But she also has a keen interest in applying the same techniques to existing creatures, like the North American mountain lion. She wants to learn more about the genetic roads to extinction and possibly prevent today’s creatures from suffering the same fate as the mammoths. Shapiro and Wilmers were talking one day about the Santa Cruz lion population when they realized that a crucial piece of information was missing: the pumaâ€™s complete genetic sequence.

Using blood that Wilmers had already collected from puma 36m, Shapiro and her team, including UCSC graduate student Nedda Saremi and postdoc Megan Supple (co-first authors of the paper), sequenced the lionâ€™s entire genome to serve as a reference for the species. Then, for comparison, they sequenced the genomes of nine other mountain lions using stored samples â€“ another from the Santa Cruz area, two from the Santa Monica mountains, one from Yellowstone, three from Florida, and one from Brazil.

The work let Shapiro see what had taken years to figure out in Floridaâ€”that the translocation of Texas cougars had boosted genetic diversity and health of the Florida panthers. The sequences also brought new insights: even after mixing in the Texas DNA, the Florida population remains closer to the genetic brink than previously thought.

â€œThe big takeaway is that translocation worked, but the lights are going to go off because they continue to inbreed,â€� Shapiro said.

Similarly, the population in the Santa Cruz Mountains â€œis not doing as well as we expected,â€� she said. The 10 genomes also held controversial hints that mountain lions may have existed in North America far longer than previously thoughtâ€”as long as 300,000 years, instead of fewer than 20,000 years.

â€œWhat Beth and her students are able to learn from just 10 individuals greatly extends what could be inferred with traditionally used DNA markers,â€� Johnson said.

More insights will come as scientists ramp up whole genome sequencing. Sequencing the full genomes of many individuals across a speciesâ€™ range is â€œtremendously valuable,â€� explains Brad Shaffer, director of the UCLA La Kretz Center for California Conservation Science. â€œThat can tell us a lot about the potential for climate adaptation and other critical conservation goals,â€� he said.

And with costs rapidly decliningâ€”Shapiro says reading 36mâ€™s genome cost about $10,000, down from $30,000 a couple of years ago, with subsequent lions sequenced for just $400 eachâ€”Oâ€™Brien and others are pushing for a much larger effort. â€œWhole genome sequencing should be done for every critter we can catch,â€� says Oâ€™Brien, of Nova Southeastern University.

Already, Shapiroâ€™s work is shining a powerful new spotlight on the genetic health of individual mountain lions and populations, pointing the way to more effective conservation strategies. Isolated populations, for example, may benefit from wildlife bridges across major highways, to allow animals to wander more widely. In other cases, scientists may need to move animals from one region to another. Overall, a more complete picture of the genome makes it possible to spot populations at greatest risk for inbreedingâ€”and the best candidates for translocation.

â€œNow we can make more informed decisions,â€� said Johnson. â€œIn the past, we made decisions based on limited genetic information.â€� The new approach takes out much of the uncertainty about a populationâ€™s genetic heritage, he said. It also offers clues about how to preserve genetic variation and may help populations adapt to change.

Though puma 36m didnâ€™t live to see any of these advances, his genetic legacy will remain. â€œWhile 36m was a badass puma by any measure, he might one day come to be the most recognized puma anywhere,â€� Wilmers wrote in a tribute.â€œ[His] will be the puma genome against which other puma genomes can be compared and used to test all sorts of evolutionary and ecological questions.â€�