Learning on the playground: How elementary school recess enhances every aspect of child development - EduBlog.News

Learning on the playground: How elementary school recess enhances every aspect of child development 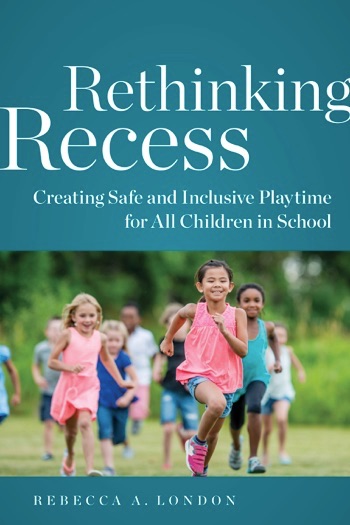 “Recess is an essential but often neglected part of the school day,” says Rebecca London. “Every child needs recess, but recess is not distributed equitably.” (Photo by Carolyn Lagattuta)

Recess is a lot like school lunch: Some kids get lasagna with an organic green salad, some get a burrito out of a box, and some do without. Like lunch, who gets recessâ€”and who gets good recessâ€”is often determined by what school district a student lives in.

Inequity doesn’t have to be baked into recessâ€”or lunch.

“Recess is an essential but often neglected part of the school day,” said Rebecca London, author of the new book Rethinking Recess: Creating Safe and Inclusive Playtime for All Children in School. “Every child needs recess, but recess is not distributed equitably.”

Students of color, low-income students, and students in urban areas are less likely to get recess at all, or they get less recess, said London, assistant professor of sociology at the University of California, Santa Cruz.

Withholding recess is the most common discipline meted out in elementary school, according to London. “It’s so common, people don’t even think about it,” she said.

But that practice flies in the face of evidence that recess attends to all the developmental needs of a child, offering opportunities for physical activity, the development of social and emotional skills like collaboration and empathy, and enhanced potential for academic success.

“When recess is built around principles of safety and inclusion, students learn to self-regulate their emotions and resolve conflicts that arise during the course of play,” she said. “When a child loses a game on the playground, they learn about anger management and working together with peersâ€”and adults. Kids can practice these skills in real time. Recess is an unregulated space. It’s not like the classroom.”

Moreover, recess gives students the opportunity to demonstrate respect and empathy for others and to establish positive relationships with peers and adults.

“A well-administered recess is the best anti-bullying program there is,” said London. “It shouldn’t be an afterthought to what happens inside the classroom. Recess improves school climate and helps students build valuable life skills. Even school districts with budget and space constraints can do a good job with recess.”

By contrast, recess that is neglected or poorly planned can be a major source of disciplinary incidents and office referrals. “When children spend their recess time arguing rather than playing, or bored rather than engaged, the time is wasted,” she said. “Worse, it can be detrimental to a child’s healthy development.”

For students who repeatedly “get in trouble” or are behind on their school work, repeated withholding of recess can contribute to feelings that they are “different,” or “don’t belong” in school, said London. “It’s a stepladder on the school-to-prison pipeline.” The students most likely to be disciplined in elementary school are boys of color, especially African American and Latinx boys, and special education students, according to Office of Civil Rights statistics London reviewed.

In the 1990s, schools in large swaths of the country began cutting back and even eliminating recess as part of a focus on standards-based accountability that also prompted cuts to art and music programs, said London. Some large urban school districts that serve low-income populations and students of color did away with recess entirely; new schools in some cities were even built without outdoor play areas.

Most districts have reinstated recess, but disparities in access and quality persist.

For recess to be successful, London says every school should have:

“A little preparation and training can go a long way,” said London.