Maxwell Gruver had been a student at Louisiana State University for only a few weeks in 2017 before he died of alcohol poisoning in a fraternity house hazing ritual known as â€œBible study.â€� He and other pledges were made to chug 190-proof alcohol called Diesel for not knowing how to recite the Greek alphabet or certain facts about the Phi Delta Theta fraternity.

Phi Delta Theta was ultimately banned from LSU, joining a list of several other fraternities banned at the school over the past few decades after hazing incidents. These incidents include the 1997 death of Ben Wynne, who died after a night of heavy drinking with fraternity brothers on a pledge night.

In October 2019, officials at Ohio University suspended all 15 fraternities on campus after allegations that at least seven of them were involved in hazing.

Drinking and hazing on campus have led to lawsuits, criminal charges, and stricter hazing laws. However, an analysis of much of the research on these punitive measures shows they have done little to change the behavior of fraternity men. 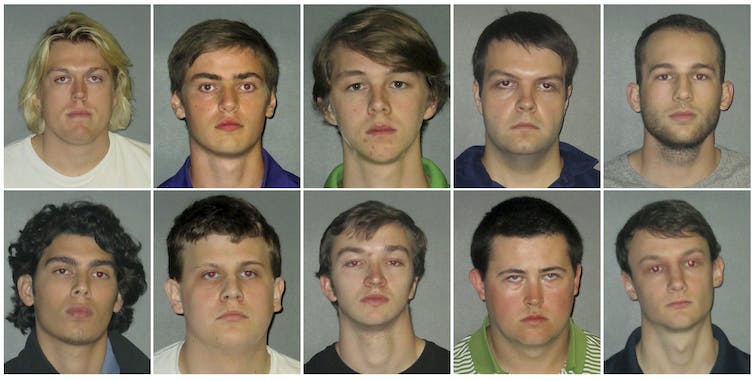 As a researcher who has examined masculinity in college fraternities, I conclude that the reason these efforts have not succeeded is because they fail to deal with the fact that drinking alcohol â€“ and other risky behaviors â€“ are deeply embedded in societyâ€™s notions about what it means to be a man.

Fraternity initiations provide a rite of passage into manhood for some college men. Some young men engage in risky behaviors such as drinking in excess to prove their manhood and gain acceptance from other men.

Numerous studies have found that commonly-held ideas associated with masculinity, such as risk-taking, competition and violence â€“ things sometimes espoused by fraternities â€“ are linked to worrisome behavior and beliefs. This may also include getting drunk and the viewing of women as lesser â€œobjects.â€�

This leads me to the conclusion that attacking the problem of drinking necessitates dismantling the idea that drinking is part of what makes one a man. 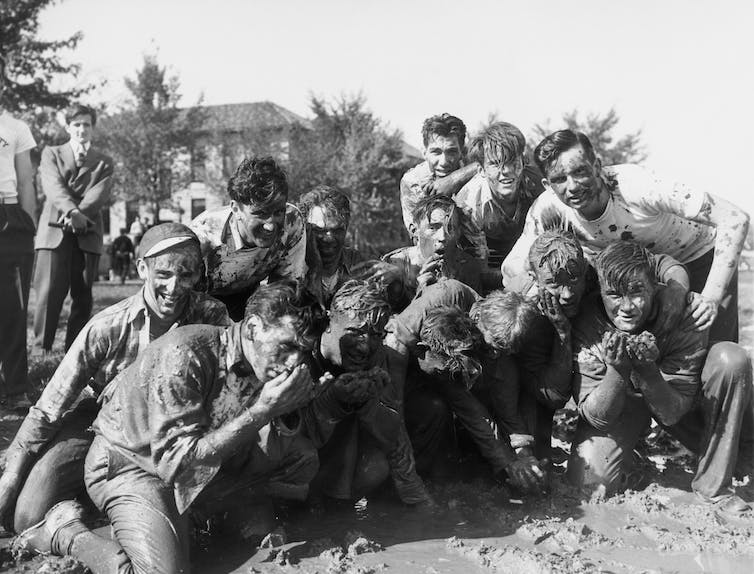 My own research used a survey to collect data from over 2,500 members of a fraternity with chapters at more than 70 U.S. colleges and universities. I found that members were more likely to drink at fraternity chapters with homophobic cultures.

This finding indicates fraternity men drink at least in part to prove they are not gay, and thus are real men, when they are with peers who want to be identified as heterosexual. Of course, this is just one of many reasons why young men drink.

As other scholars have found, alcohol use affords fraternity men the chance to engage in behaviors perceived to be feminine, such as showing emotion or developing relationships with other men, without having their manhood called into question. Alcohol use, in my view, provides fraternity men with a way to prove their masculinity and at the same time escape it.

What does this mean for those who hope to address problematic behaviors, such as excessive alcohol use on campus?

First, addressing how fraternities view manhood may be an effective way to get individual members to behave more responsibly. Whether dealing with fraternities as a whole or individual members, interventions, such as campaigns to set new social norms, should aim to reduce fear and anxieties that prevent men from being themselves, particularly around their sexual identity. Efforts should be made to challenge what it means to be a fraternity man.

Research indicates that marketing campaigns targeted toward men can change their attitudes and behaviors about sexual violence. Like the 2014 NO MORE campaign against domestic violence and sexual assault that featured prominent NFL players, campus leaders could design campaigns that feature fraternity men denouncing homophobia and misogyny.

Like other programs that help college men explore manhood, forums could be convened to help fraternity men develop meaningful, deep relationships with one another without alcohol, or having their manhood called into question. These forums may strengthen relationships among fraternity men and reduce their alcohol use.

Since my study shows that drinking and ideas about manhood vary from one fraternity to another, â€œone size fits allâ€� approaches â€“ such as community-wide fraternity bans and prohibitions â€“ are unlikely to change the behaviors of fraternity men. In my view, it will require individual or organization-specific interventions. That, it seems to me, will be more likely to curb problematic alcohol use before another death, injury or sexual assault occurs.