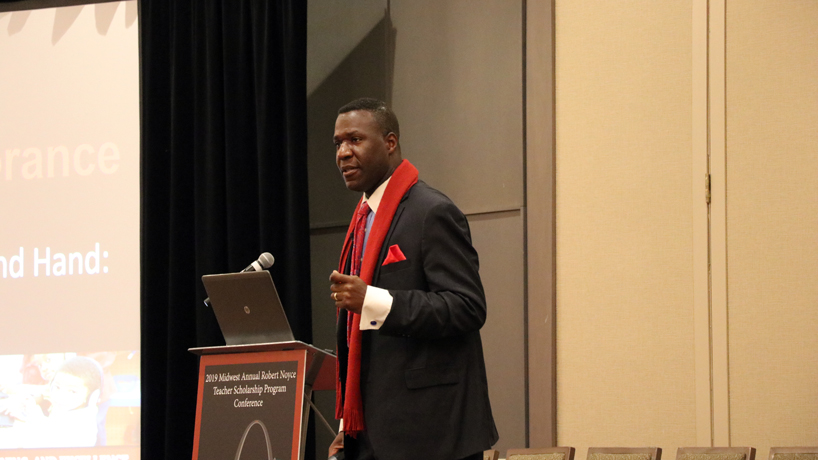 The University of Missouri–St. Louis continued to underscore its commitment to STEM education and support of high-needs schools in the region by hosting the 2019 Midwest Annual Robert Noyce Teacher Scholarship Program Conference.

The conference brought more than 250 pre-service STEM teachers and faculty mentors from 16 Midwestern universities and colleges to the Marriott St. Louis Airport hotel this past weekend. This year, the theme was “Developing Strategies for Bringing Experiential Math and Science Teaching to High Needs Schools.”

It was organized in partnership with three other Midwestern universities: Illinois State University, Indiana University-Purdue University at Indianapolis and Southern Illinois University Edwardsville.

“I thought it went very well,” Curators’ Distinguished Teaching Professor and Professor of Biology and Education Charles Granger said. “It is so rewarding to see so many young, enthusiastic teachers excited about learning about how to take on the challenges of STEM education.”

The conference was made possible by a $1.4 million grant from the National Science Foundation. Granger also pointed to the efforts of Nicolle Von Der Heyde, a lecturer and doctoral student in the Department of Educator Preparation and Leadership at UMSL, who was on the planning committee. She also developed much of the conference’s programming.

Granger said the conference showed synergy with UMSL’s current $1.2 million NSF Robert Noyce grant. The grant is designed to increase the flow of prospective STEM teachers into high-needs schools – those with a teacher turnover rate exceeding 15 percent for the previous three years and a student population eligible for free or reduced lunch exceeding 50 percent.

The grant provided scholarships of up to $20,000 for students to get a teaching certificate and a master’s degree. Recipients commit to teaching at a high-needs school in the area for five years. Granger said because of this partnership, UMSL has been able to fund 21 STEM educators in the past three years.

“It’s part of our mission statement as a university,” he said. “Supporting the community through education in schools with high-needs and high-risk students. It really addresses the commitment UMSL has made to the St. Louis area.”

In particular, the conference was an opportunity to for UMSL to strengthen its relationship with the Jennings School District. Art McCoy, superintendent of the district and UMSL education alumnus, gave the concluding address, and Rhonda Key, assistant superintendent in the Jennings School District, moderated a panel of eight titled, “Voices from the Field,” where attendees heard from outstanding teachers from the St. Louis area on how they meet the challenges of the urban STEM classroom.

Generally, the objectives of the conference were to build on existing partnerships to develop evidence-based learning communities among Noyce project members and scholars, to increase personal and professional connections across the region and to enhance scholarship.

Some of these goals were achieved through traditional workshops, seminars and networking, but the conference also included activities that took attendees into the community. They included a STEM scavenger hunt at the City Museum, tours of historical sites related to social justice in Missouri and a workshop at the UMSL’s Human Origin Lab.

The activities struck a balance between fun and informative, especially regarding social issues that affect students in the classroom. Granger said the bus went through Ferguson, Missouri, where Michael Brown died in an officer-involved shooting, on the way back from the Human Origin Lab. He took advantage of the route for an impromptu learning opportunity, asking out-of-town attendees what they thought of their surroundings.

“I said, ‘Does this look like what you saw on television?’” Granger said. “So, we had a little lesson right there on media.”

Small moments like that illustrate how enthusiastic Granger is about taking on the region’s challenges.

“It’s just wonderful to be a part of addressing these needs,” he said. “It’s getting away from talking and to actually doing.”